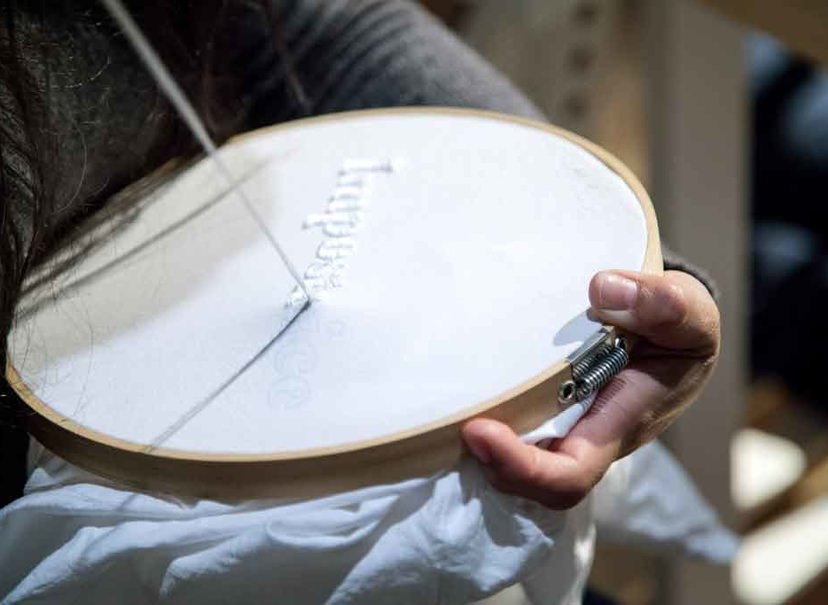 Estela López Solís’ artistic practice focuses on possibilities of unveiling – without betraying – intimate realities that tie humans together. The secret lives of beings and spaces fascinate her. López’s explorations on the emotional realities and the interior worlds that underlie all appearances strive to reveal what establishes us and connects us as human beings. In her more recent explorations, words and text – compiled from different types of dialogues, sometimes performative – are adapted to different techniques and disciplines : fiber arts, performance, relational aesthetics, traditional and digital graphic arts, installation, sound creations, illustration, etc. The pieces created through this lens carry a disciplinary burden but also subscribe to and activate an interdisciplinary creative process.

The central role of words in Lopez’s practice generally lies in the desire to recognize oneself in the voice of others. In her projects, she is interested in the combination of material, images and words from different heterogeneous sources, which she then puts in relation to create unprecedented affiliations. This desire is anchored in the necessity to undertake, through her work, the complexity of what makes and divides us : along many genealogical, social-cultural, artistic lines. It also entails the idea that art and creativity allow humans to engage in an intimate dialogue with the other(s): our contemporaries, those who came before us and those who will come after our time.

The textile works that Estela is showing at Artista x Artista are the culmination of a process that has started during her evolutive performance Hantises (Asechantes), which was presented as part of her exhbit Susurrantes (Centre culturel de Notre-Dame-de-Grâce, Montréal, 2017).  During this performance, whilst she was embroidering by hand with white thread on second-hand domestic objects made of fabric, the artist engaged in conversations with the public on fears and anguish that can arise at work, derived from the imperatives of productivity. The embroideries were sentences that visitors had voiced already, naming and expressing emotions they had felt. These words were generously and genuinely offered to Estela López by the people who talked with her, making it the primary media for future works. Thus, the assembled textual material gave way to many works in series, among which the embroideries presented here. Interested in combining her textile work with architectural spaces and the furniture that inhabits these spaces, López contributes to the exhibit with a series of installations and a intervention on a wall.

Acechantes in an exhibit held as part of Contemporary Art Encounters - Rencontres d'art actuel Montréal ~ Habana, thanks to a fruitful partnership between Artista x Artista and DARE-DARE.

Estela López Solís was born in 1978 in Mexico, where she studied visual arts. She currently lives and works in the Eastern Townships region of Quebec. Estela weaves links into her work that become unsuspected connections, borrowing images and words from heterogeneous sources. From the beginning of her career, she is interested in the formal, expressive and meaningful possibilities she brings to the exploration of various disciplines, including drawing, photography, illustration, video, textile art and performance. It seeks to give a visual form to the intimate and secret life of beings, things and places. Her artistic research focuses on the unveiling of the escaping appearances that connect us deeply to others.

Various cultural institutions in Canada, France and Mexico have supported her work. Her drawings interact with poetic texts in various publications, notably in the collection Pierre Blanche - Poèmes d'Alice by Stéphanie Bolster (Le Noroît, Montreal, 2007) and in the novel Wigrum by Daniel Canty (La Peuplade, Saguenay, 2011 and Talonbooks, Vancouver, 2013). Her works have been shown in Mexico, Quebec, France and the United States. They are part of various public and private collections.

Estela López Solís thanks the Canada Art Council for its support.