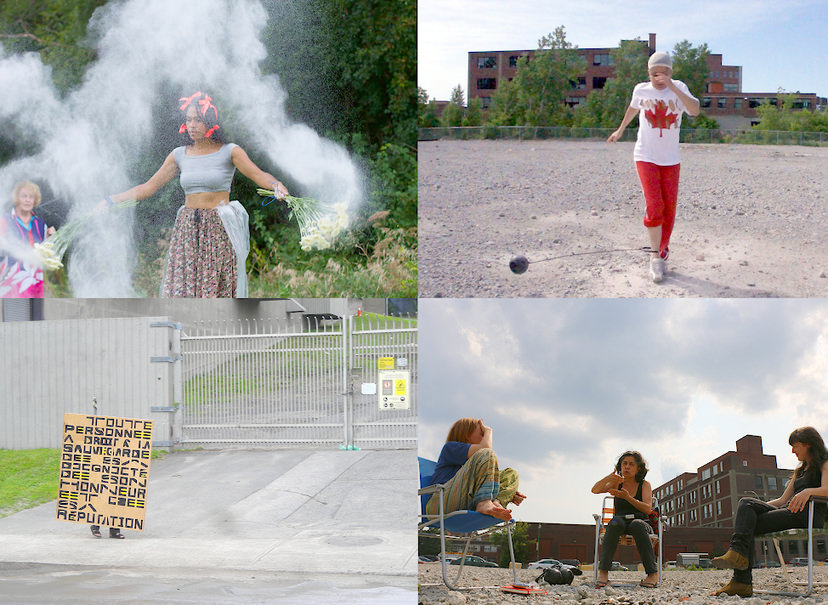 The members of L'ARAIGNÉE, a feminist platform of experimentation and dissemination in contemporary art (http://laraignee.ca/), are happy to collaborate with DARE-DARE to develop a part 2 of their Exploration Laboratory on Performative Urban Interventions.

This laboratory was first conceived and launched in the summer of 2015 in order to reflect, support and disseminate practices in performative urban interventions and especially those carried by women artists. With a particular emphasis on the production process of the works and the collective dimension that it often requires, the Laboratory wants to be a meeting place for a large audience; those from the art scene, those from the street, those from the neighborhood and the surrounding community, etc.

The invited artists have developed proposals that will enter into dialogue with these different audiences, by becoming part of the urban fabric, through their physical presence and the singularity of their respective sensitivities. Each of the projects that will be presented around DARE-DARE will address the issue of performative incursion in more or less hospitable environments, whether through identification with a marginalized community, or by addressing themes or issues that the it could be described as "difficult", unseemly, destabilizing or controversial, or simply by displaying and demonstrating a certain otherness or fluidity in identities.

What does art do in the city and how can artistic proposals present themselves and unfold themselves in diverse urban locations and contexts? How to better accommodate critical performance incursions and allow their friction or dissemination to unsuspecting audiences? Do we make art for ourselves or for others? Each guest artist will explore some facets of these issues through critical proposals aimed at challenging and soliciting some commitment from those who will experience them. Can we still ask questions in the public space and thus risk to break the social balance of a place, if only for a moment to include a transitional poetic or political proposal? What is our relationship to law enforcement? What is our real connection to specific stigmatized or marginalized communities, when our proposals sometimes rely on identification with these same groups? In behalf of whom could we talk? Where can we go?

More details on each of the projects will soon be revealed ...

Follow this page to be kept up-to-date with Kamissa Ma Koïta, Helena Martin Franco -aka Fritta Caro, and karen elaine spencer, performing works in public space as part of the Exploration Laboratory in Urban Performative Interventions_volet 2 at DARE-DARE.

L’ARAIGNÉE is a platform for artistic collaboration, formed to foster dialogue and to create new contexts within which to exhibit the work of its members, and that of guest artists, both locally and internationally. The collective consists of three artists and a curator. Sharing a feminist perspective, the four members of the collective are united in their desire to initiate projects and to exhibit art that reflects not only their artistic sensibilities but also their political stance. Creating links between communities, the artistic establishment and artists, all whom hold their own specific interests, L’ARAIGNÉE seeks to nurture reflection and to raise questions around our assumptions and expectations of contemporary art.

The Collectif L'Araignée has set up an Exploration Laboratory for Performative Urban Interventions in the summer of 2015 with the aim of reflecting on, supporting and disseminating practices in urban performances/action art in public spaces. This new project of the Collectif L'Araignée addresses the question of the autonomy of the artist and the groupings of artists vis-à-vis the more established institutional structures and constraints related to them. This new cycle encourages encounters between artists and the cross-fertilization of different practices, as well as diversity and proximity to diverse audiences. The Exploration Laboratory on Performative Urban Interventions is designed to invest various public places in the city, these spaces, which are open and shared by all, in dialogue with the daily reality of citizens in transit.

Kamissa Ma Koïta's experimental and transdisciplinary practice is fueled by feminisms, alter-globalization movements, queer and popular cultures. It takes shape in performance, in video and in the creation of artistic alternatives, each for their potential of fast and effective direct actions. It is strewn with her own everyday objects that she recontextualizes to create links. Her intersubjective approach leads her to work collectively and to think about the social body as a material. Through this research, Kamissa tries to create inclusive non-hierarchical spaces, inevitably ephemeral. She creates them so that we can talk, sing, resist, dance, scream, question, disturb, cry, reflect and laugh together. Kamissa Ma Koïta's next actions will focus on the living conditions of black communities, notions of societal privileges and the problem of under-representation of marginalized citizens.

Born in Cartagena, Colombia, Helena Martin Franco lives and works in Montreal since 1998. She holds a Master's degree in Visual and Media Arts from UQAM, and is actively involved in the network of Artist-run centers in Montreal. She is part of several visual arts collectives, including: L'Araignée, a feminist contemporary art platform. From a gender perspective, she establishes links between these collectives and cultural organizations in order to encourage the meeting and exchange of artistic practices, particularly between Canada and Colombia. Her interdisciplinary practice explores the mixing of different artistic processes and the hybridization between traditional techniques and new technologies. Her work revolves around the questioning of changing identities in immigration circles. It has been presented in the Dominican Republic, Spain, New Zealand, Colombia, the United States, Argentina, Cuba and Quebec.

Born in 1960 in Nelson, British Columbia, karen elaine spencer lives and works in Montreal where she has lived for many years. She holds a Master's degree in Fine Arts from the Université du Québec à Montréal and a Bachelor's degree from the Nova Scotia College of Art and Design (NSCAD) in Halifax. In recognition of her contribution, she was awarded the Galerie La Centrale - Powerhouse Award in 2012. Her works have been presented in Canada, the United States and Europe, notably during Blogueurs en Captivité, a collaboration of DARE-DARE and Folie/Culture, at the Art in Odd Places Festival in New York, and in the context of the Moncton Performance and Intervention Art Festival. She has also given spoken word performances at the Westmount Library, the Arts Café in Montreal and the John Snow House in Calgary. Her work also takes place in the context of artist residencies, most recently at Brooklyn's International Studio and Curatorial Program (ISCP) where she hosted the hey mike blog in 2012, as well as the New Gallery in Calgary and Praxis art actuel in 2011.

Noémi McComber completed a Master's degree in Visual and Media Arts from the UK's Chelsea College of Art in 2002. Since then she has pursued various artistic projects as an artist and curator, taking a multidisciplinary approach. and collaborative. In particular, she presented her work at ICA (Institute of Contemporary Art) in London and Kunstverein Kohlenhof in Nuremberg in 2003, at the Moscow Center for the Arts, and at the Castlefield Gallery in Manchester in 2006, at L’Oeil de poisson in Quebec City and the Sherbrooke Museum of Fine Arts in 2007, as well as the Powerhouse Gallery and B-312 in Montreal in 2009. In 2011, she presented Nouveaux drapeaux pour vieux monuments at DARE-DARE, Déploiement en règle at the Viva art action! performance festival and La peau du bronze, a solo exhibition at the Maison des Arts in Laval. In 2013, her videos were shown at Optica in an individual exhibition titled Mise en échec and at Studio XX in the collective project Corrections marginales. Her work was also shown in Finland, Wales and Colombia that year. She is one of the founding members of the collective L'Araignée, feminist contemporary art platform. She lives and works in Montreal.