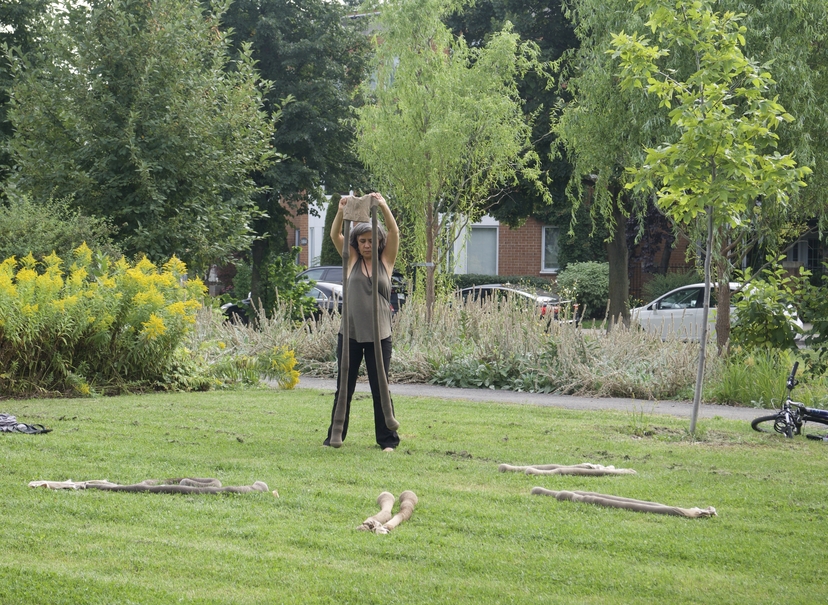 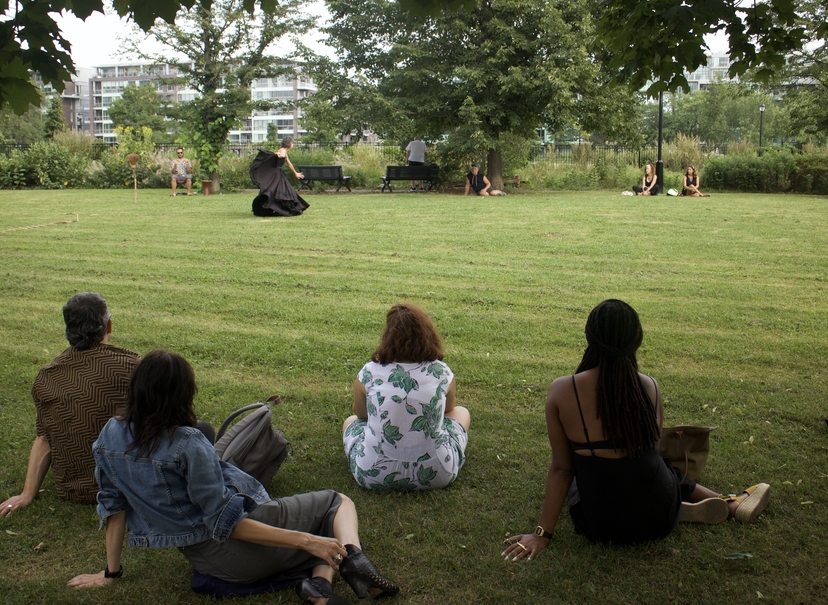 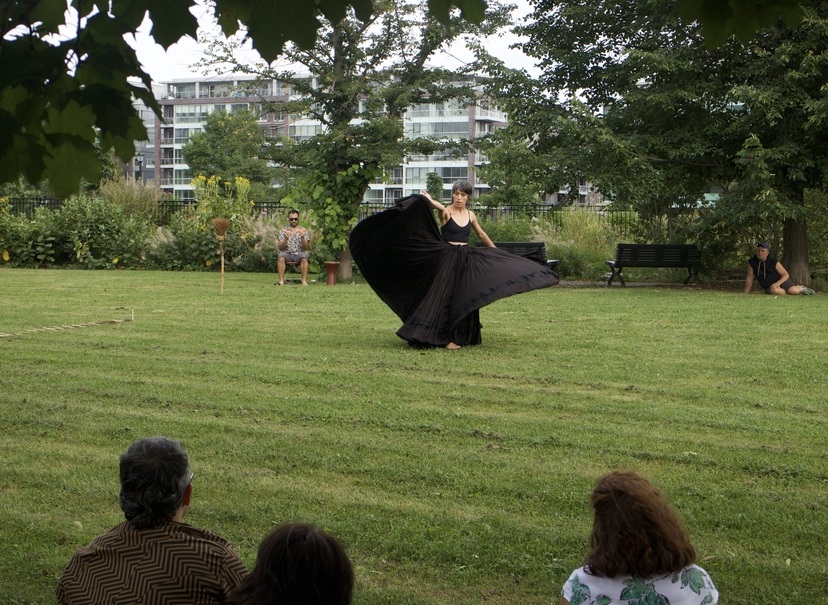 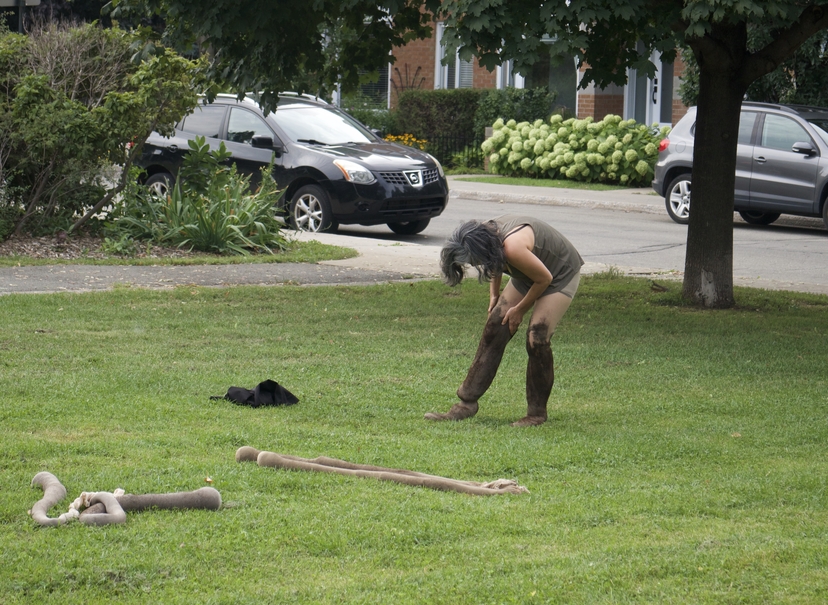 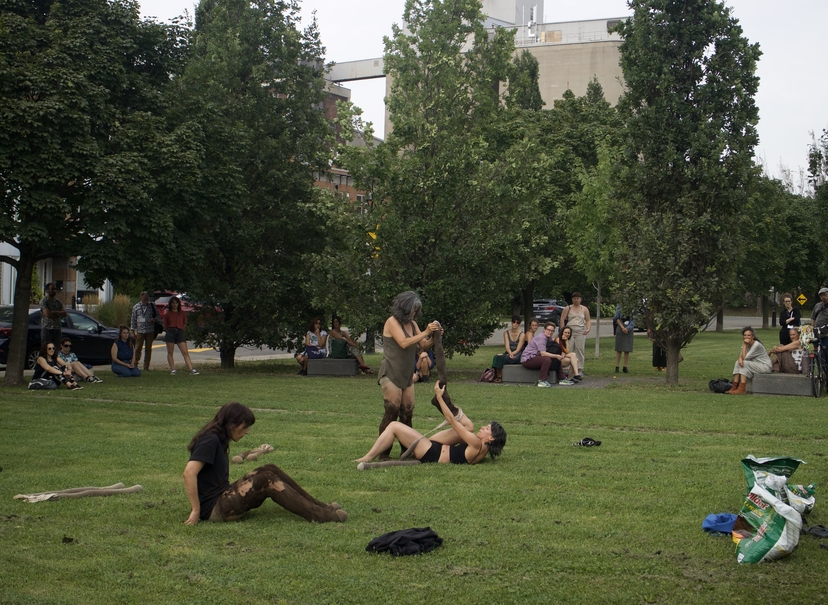 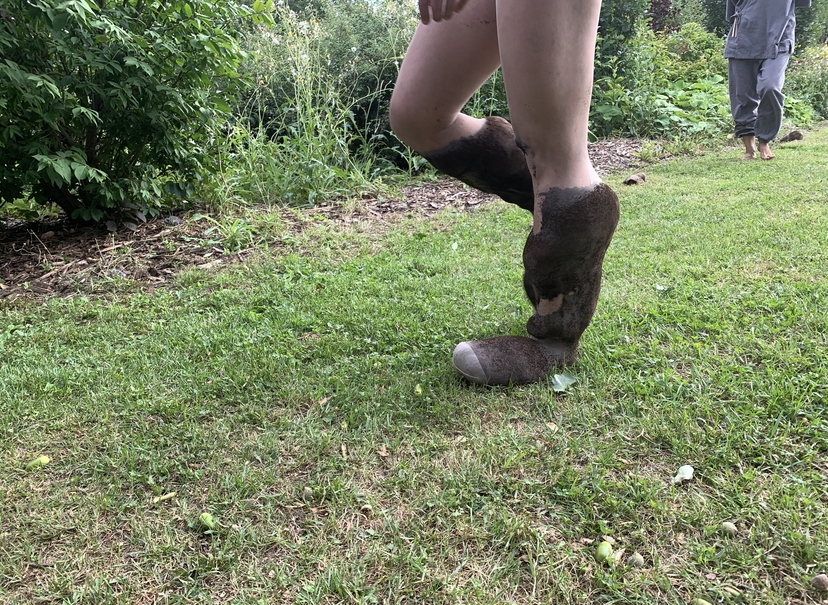 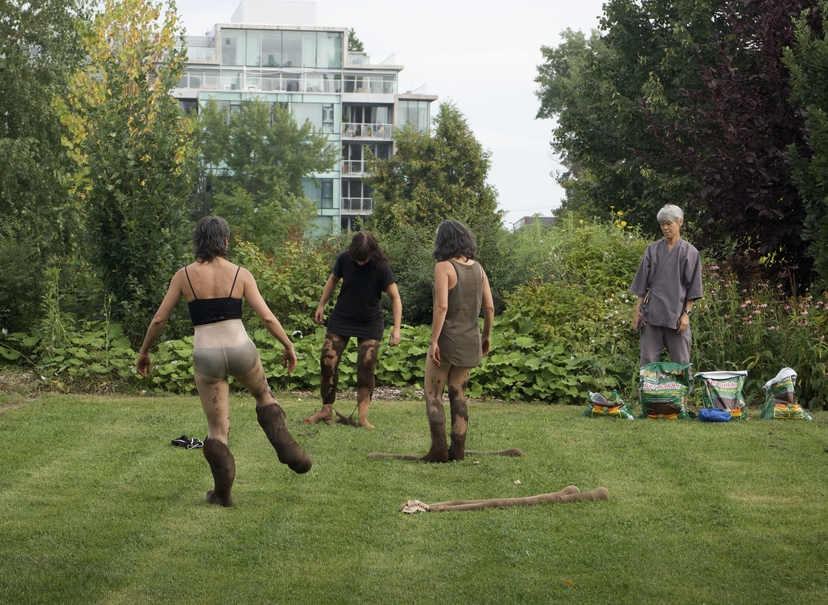 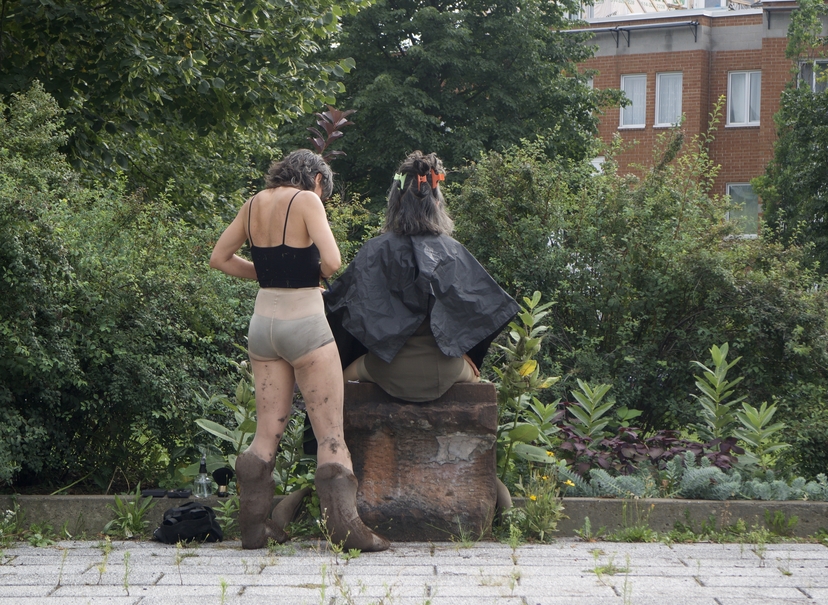 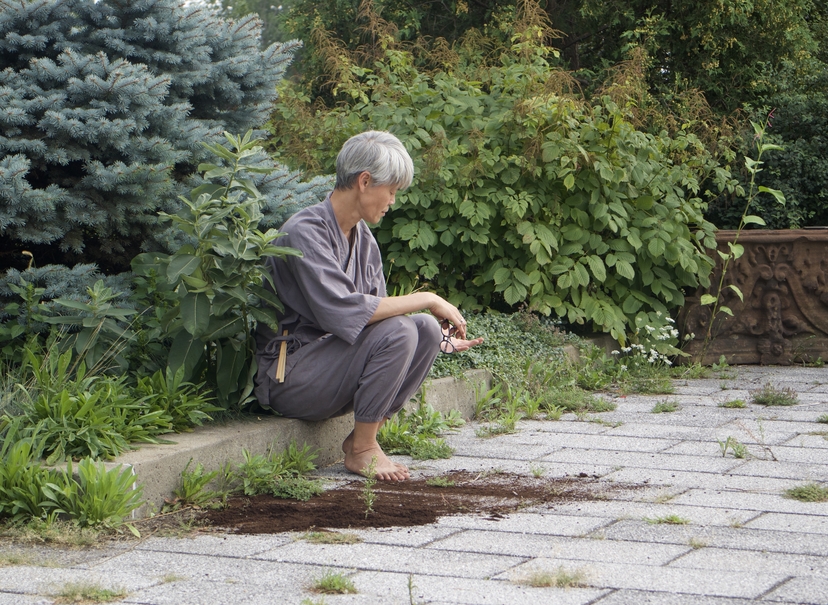 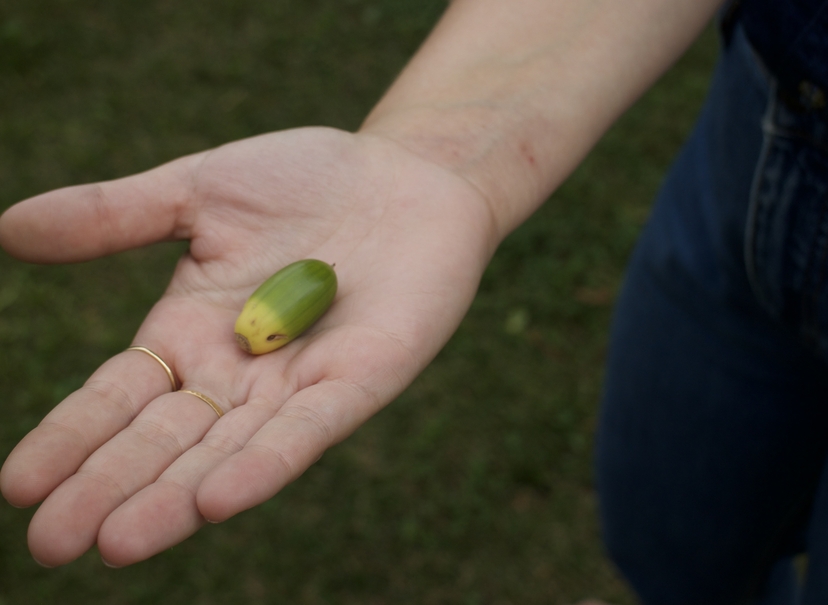 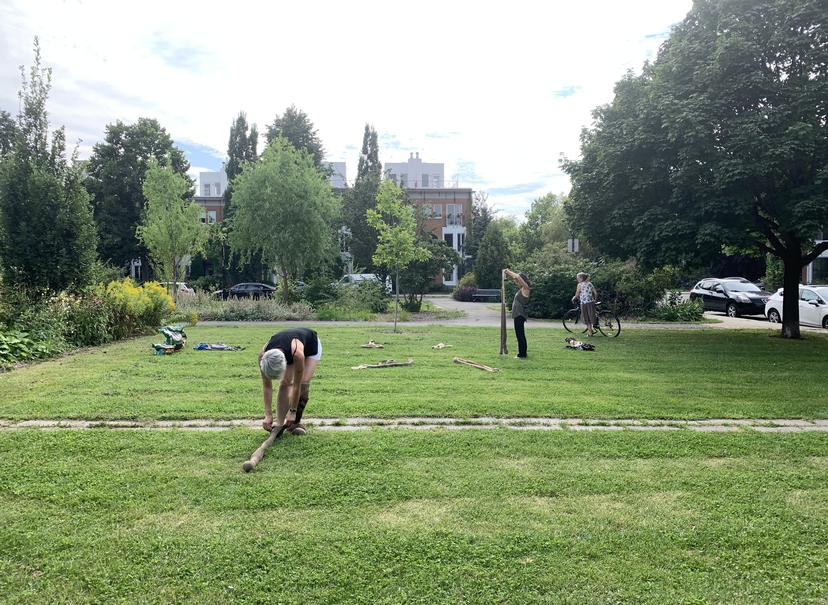 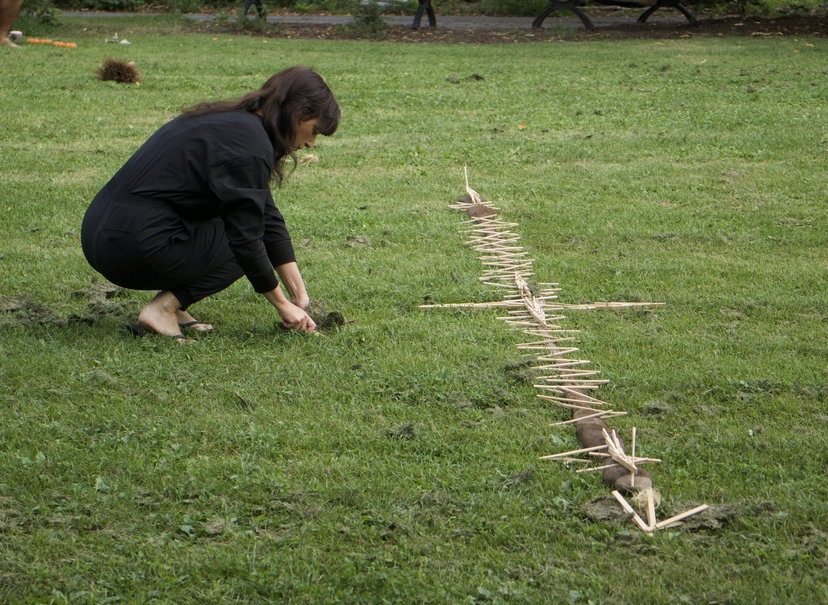 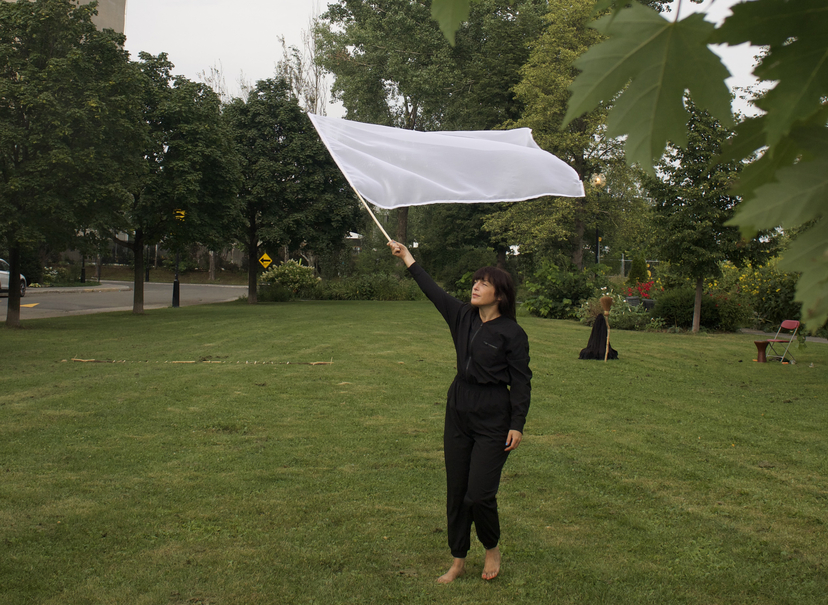 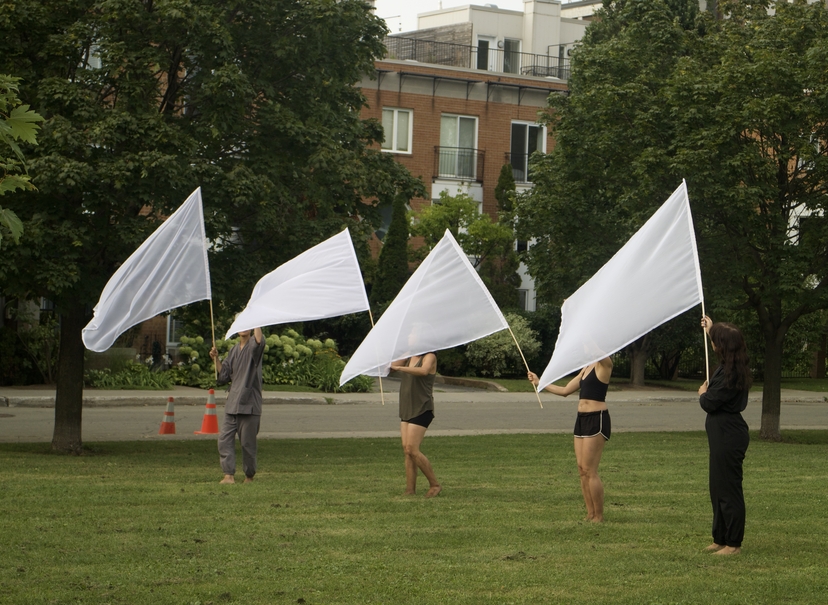 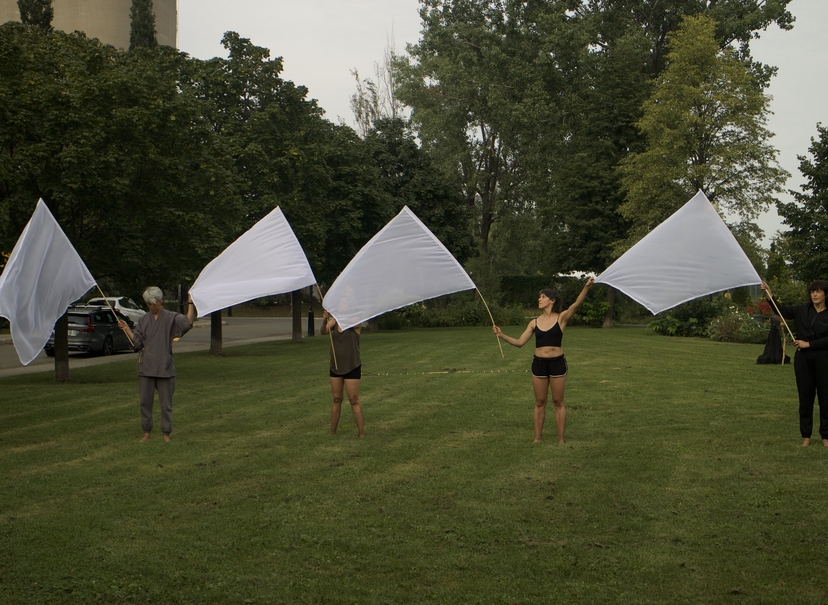 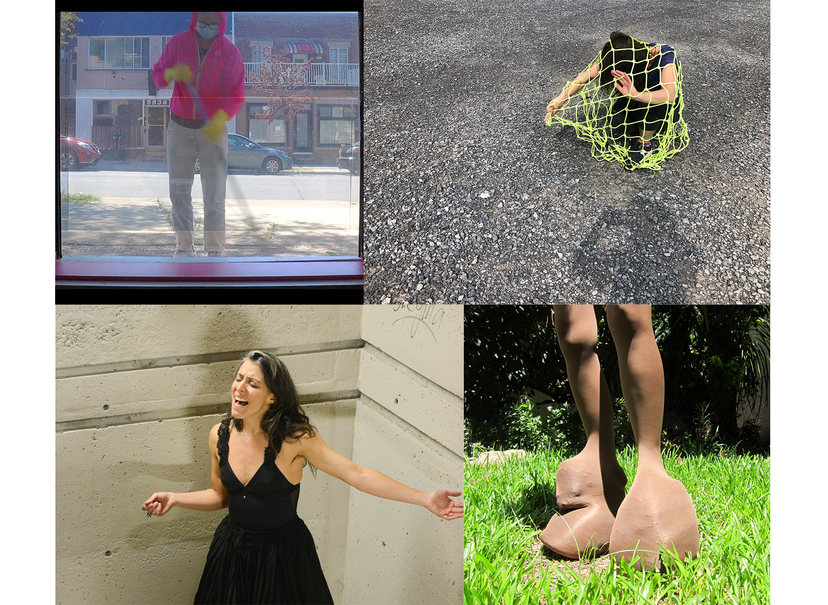 In the context of the colloquium Un art public éthique : perspectives canadiennes/ Ethical Public Art in Canada, COLLECTIF L'ARAIGNÉE has brought together artists Pilar Escobar, Kimura Byol, Noémi McComber and Helena Martin Franco to invest the Parc du Lien Nord (on the banks of the Lachine Canal). The themes addressed will intersect to evoke questions related to identity, the relationship to the territory, the landscape and the environment, the rituals of the body, play and transformation.

The Laboratoire d'exploration en interventions urbaines performatives was conceived and launched initially in the summer of 2015 with the aim of reflecting on, supporting and disseminating practices in performative urban interventions and particularly those carried and practiced by women artists. With a particular interest in the process of making works and the collective dimension of this process, the Laboratory aims to be a place of encounter and experimentation between artists and with different audiences; those from the art world, those from the street, those from the neighborhood and the surrounding community. The invited artists will develop proposals that will enter into dialogue with each other.

Founded in January 2011, L'Araignée is a collaborative platform that serves to disseminate the work of its members as well as that of other invited artists in new contexts, locally and internationally. The collective is composed of artists, writers and curators who share a feminist stance and a desire to take initiatives to disseminate art that responds to both their artistic sensibilities and their political positions. The collective creates bridges between communities, artistic structures and artists, who, by their particularities, can nourish reflections and raise questions about what is expected from current art. laraignee.ca

The members of L'Araignée, a feminist collective for experimentation and dissemination of contemporary art, are pleased to partner with DARE-DARE to develop this new iteration of their creative laboratory in public space.

kimura byol lemoine is a feminist conceptual artist in multimedia (video, pop art calligraphy, writing and collaborations) who through her experiences undeniably questions gender binarity, the perception of gender and racial identities, linguistics in voluntary or involuntary "loss" through translation and bodies as commercial objects. By giving voice and visibility to minorities, the archiving of narratives is a way of restoring the credibility of a non-eurocentric memory of identities. k-l develops, through her paintings, videos and other media, an artistic work with influences from expressionist art (in her early years), calligraphic art (in Korea), conceptual art (in Korea and Canada), in which she explores and questions identity in its gender dimension and in its relationship to the other from a socio-political, historical and/or cultural angle. Her work has been presented in a dozen solo exhibitions and has participated in numerous group exhibitions (Seoul, Lille, Hong Kong, Tokyo, Kyoto, Vancouver, Montreal, Brussels, etc).

Born in Medellín, Colombia, Pilar Escobar grew up surrounded by artists and musicians. Her parents always encouraged her to develop her creativity and to have a positive attitude despite the context of fear and violence that surrounded her.  She studied music, fashion design, textiles and hairdressing, which fostered the hybridity that underlies her artistic practice. For the artist, action art allows for a dialogue between textiles, dance, speech, song and theater, as well as a confrontation of materials such as wool, silk, hair, onion skins, menstrual blood, clothing and even horse manes.  Exploring gesture and movement as modes of emotional expression, she uses performance to highlight a self-determined physicality. Ritual and intimacy are also recurring themes in her practice. Always aware of the past, she addresses everyday issues in response to questions about her current life in Canada and her country of birth.

Helena Martin Franco, founding artist of the collective, was born in Colombia and has lived and worked in Tiohtiá:ke/Montreal since 1998. Her interdisciplinary practice explores the blending of different artistic processes and the hybridization between traditional techniques and new technologies. Helena creates autofictions where she explores the permeability and boundaries between cultural, national and gender identities. Her artistic proposals participate in the dialogue about gender violence, immigration and artistic censorship. From a feminist perspective, she creates links between collectives and cultural organizations in order to encourage encounters and exchanges of artistic practices, particularly between Canada and Colombia. She is also the founder of La Redhada, Red de mujeres artistas del Caribe colombiano; >CAVCA, Comunidad de artistas visuales de Cartagena y Bolívar; and Las meninas emputás! Winner of the 2018 POWERHOUSE PRIZE and holder of a Master's degree in Visual and Media Arts from the University of Quebec in Montreal, her work has been presented in the Dominican Republic, Lithuania, Spain, New Zealand, Colombia, Bosnia-Herzegovina, Iran, Argentina, Cuba and Canada.

Noémi McComber, founding artist of the collective, received her MFA from Chelsea College of Art (University of the Arts, London) in the UK. Since then, she has pursued various artistic projects as an artist and curator, adopting a multidisciplinary and collaborative approach. She has presented her work at the Institute of Contemporary Art (ICA) in London and the Kunstverein Kohlenhof in Nuremburg, the Moscow Centre for the Arts and the Castlefield Gallery in Manchester (UK), the Oeil de poisson Gallery (Quebec City) and the Musée des Beaux-arts de Sherbrooke, as well as at La Centrale galerie Powerhouse and B-312 in Montreal. In 2011, she presented New Flags for Old Monuments at DARE-DARE, Deployment in good standing at the Viva art action! performance festival and the solo exhibition La peau du bronze at the Maison des Arts de Laval. In 2013 her videos were shown at Optica in a solo exhibition entitled Mise en échec, and at Studio XX in the collective project Corrections marginales. Her work has also been shown in Finland, Wales, France, Bosnia-Herzegovina and Colombia. She is interested in representation, through different objects, signs and symbols, drawn from the domestic and private sphere as well as the public and political. She lives and works in Montreal.