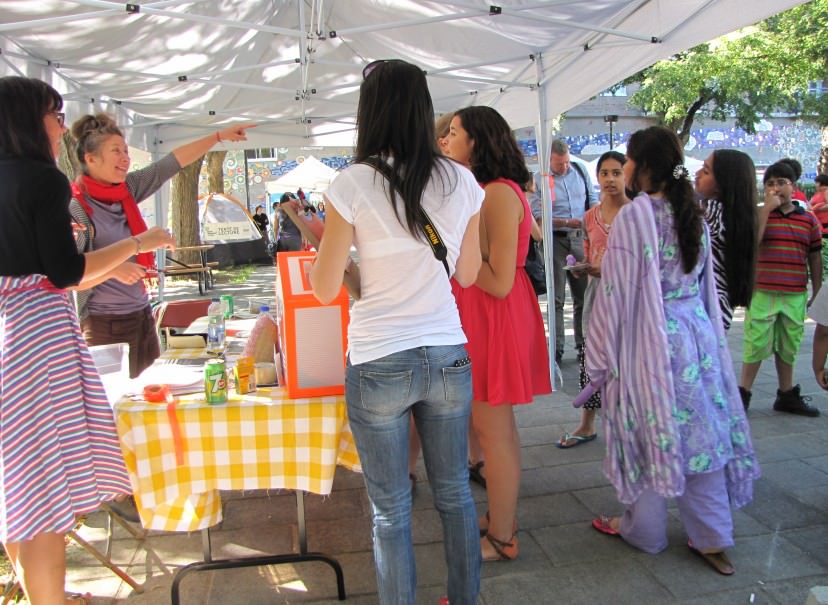 In August of 2013, artists Magali Babin and Sylvie Cotton started an interdisciplinary project named La Musique de tout le monde. It consisted in reaching out to the residents of the Complexe d'Habitations Jeanne-Mance with the goal of creating several sound pieces.

Together, the artists created three musical compositions, of which the point of origin is a spoken list of the first names of each of the 290 persons who accepted to participate in La Musique de tout le monde. The list became the source material that was transformed into an enumeration of three audio compositions : an itemized enumeration of all the first names, a progressive juxtaposition of all the first names, and a unique accumulation of all the first names. In the end, the artists drew out of the fabric of exchanged words and encounters, a signature sound that they have decided to release publicly, as the symbol of a resounding and recognized human presence at the heart of an urban environment. This sound capsule becomes an acknowledgement of the existence of human lives in their domestic, intimate and familial spaces, living at the heart of Montreal, and more specifically, within its neuralgic, historical, social, and now artistic, centre.

Globally, the piece emanates the interdisciplinarity sought out by Babin and Cotton, and pushes the relational vocation of the project to the forefront, conserved at all stages of creation.

The second component is a 21 hour long radio capsule, playing the musical favourites chosen by the residents associated with the sound pieces.

The sector occupied by the Habitations Jeanne-Mance (HJM), a neighbourhood  bordering Dare-Dare's current location, and a historical community space in Montreal, was spared from the renovations carried out in the downtown sector now known as the « chic » Quartier des spectacles. It is one of the rare residential sectors to have been saved. This new, mostly commercial space, acclaimed cultural promoter, now showcases entertainment of all kinds, indoor as well as outdoor, and this, 365 days a year.

It is within this context that the project La Musique de tout le monde inserts itself : it reminds us that, on the periphery of all this agitation, resides not only the presence of almost 2000 persons that inhabit the HJM, but also an unrecognized or unknown diversity of cultural affiliations.