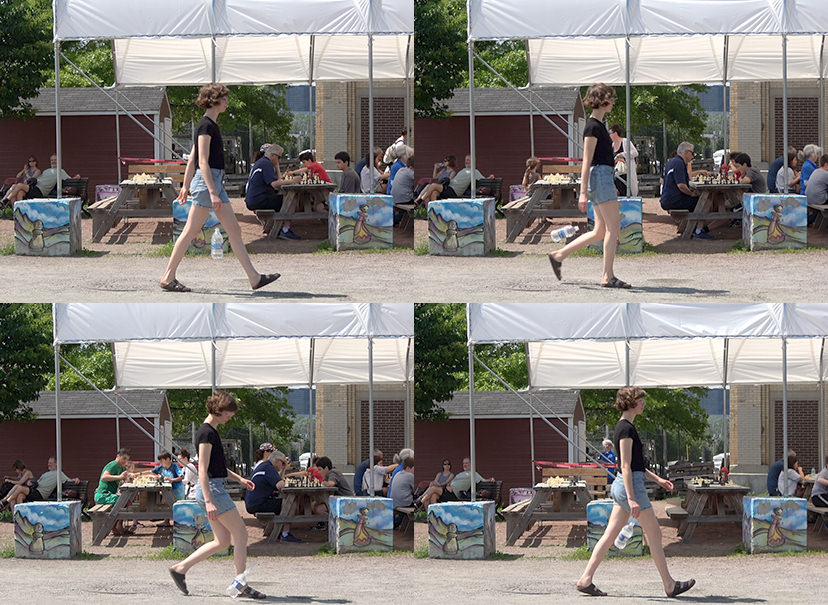 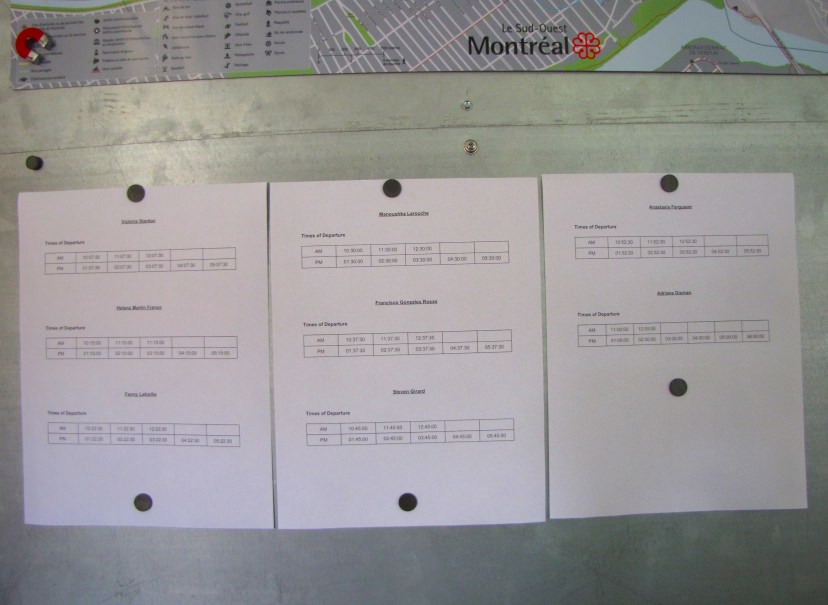 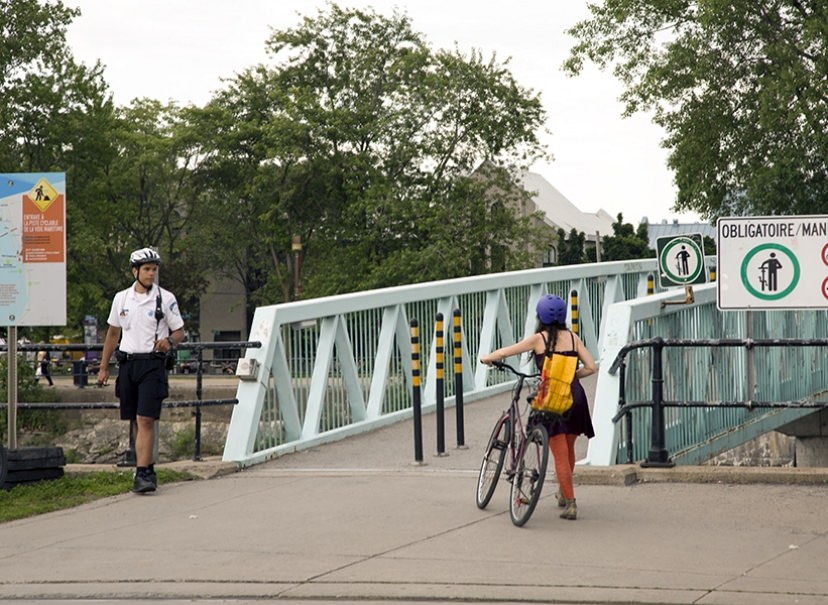 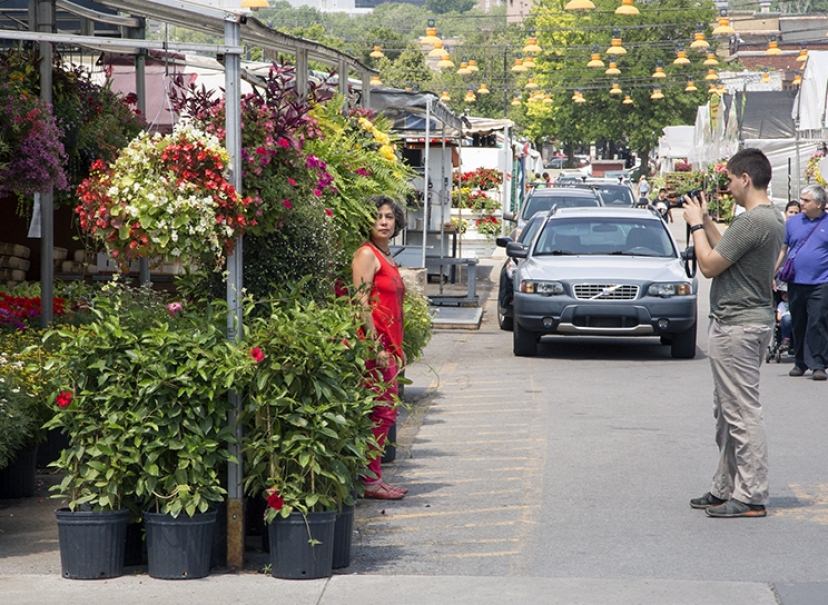 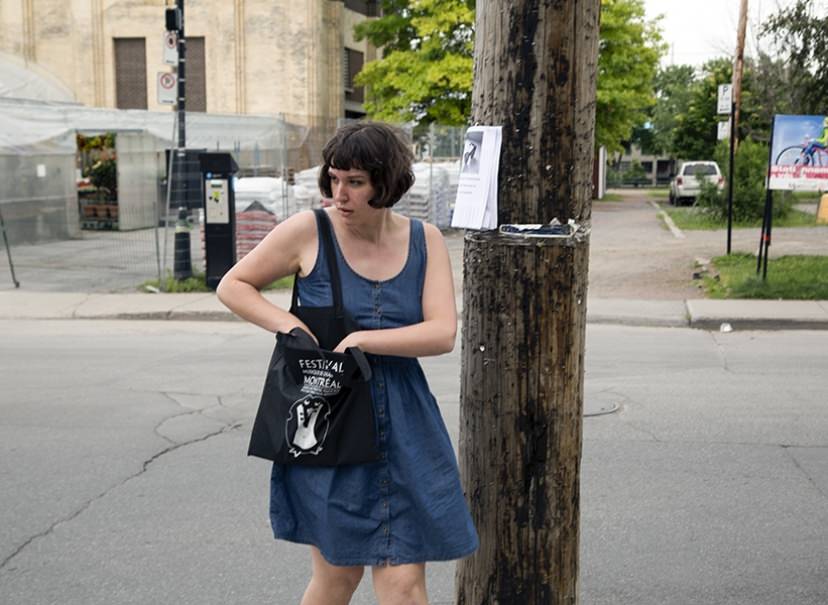 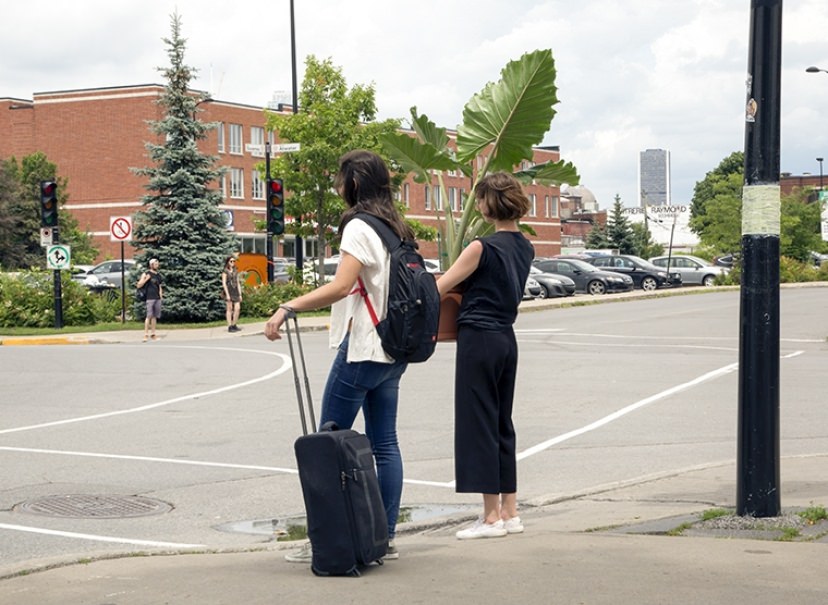 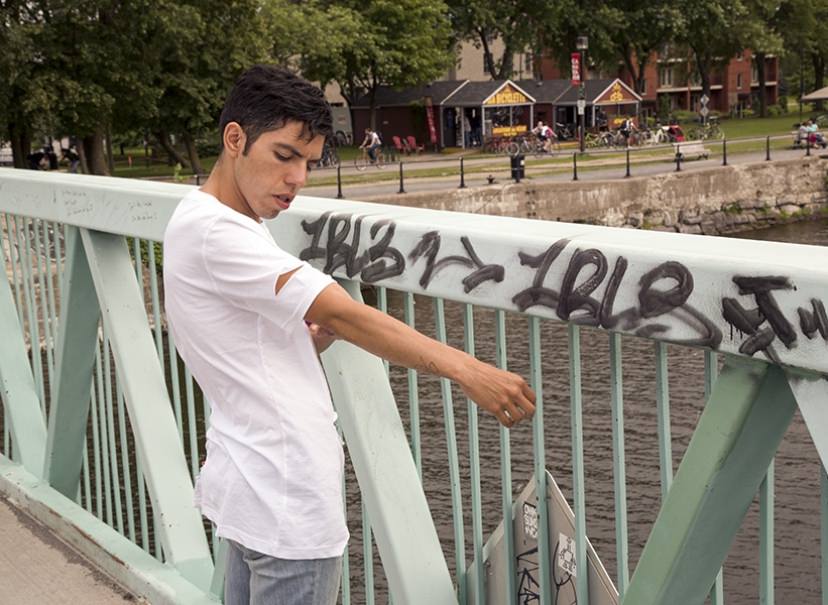 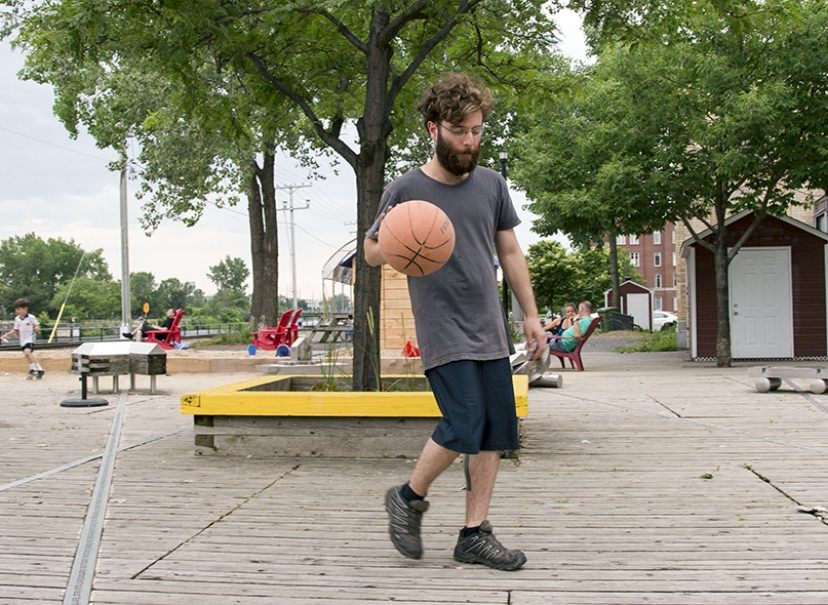 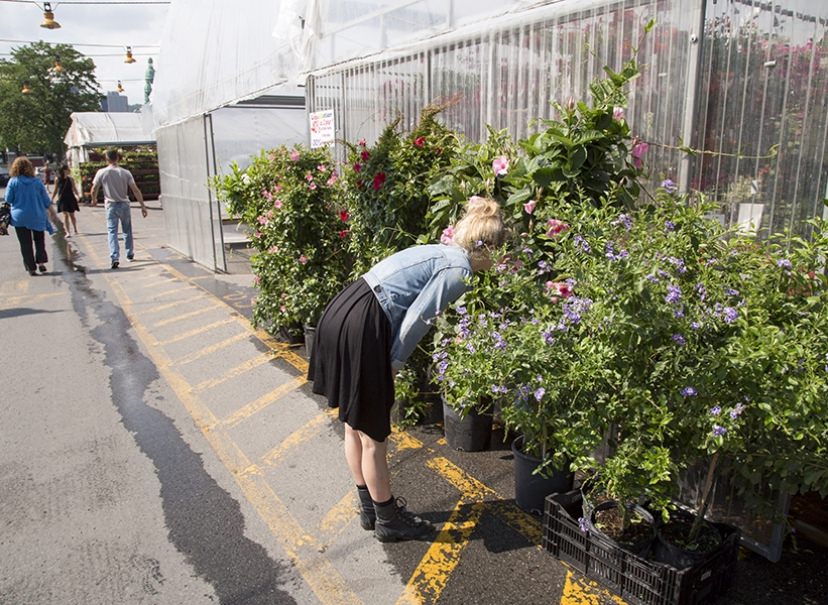 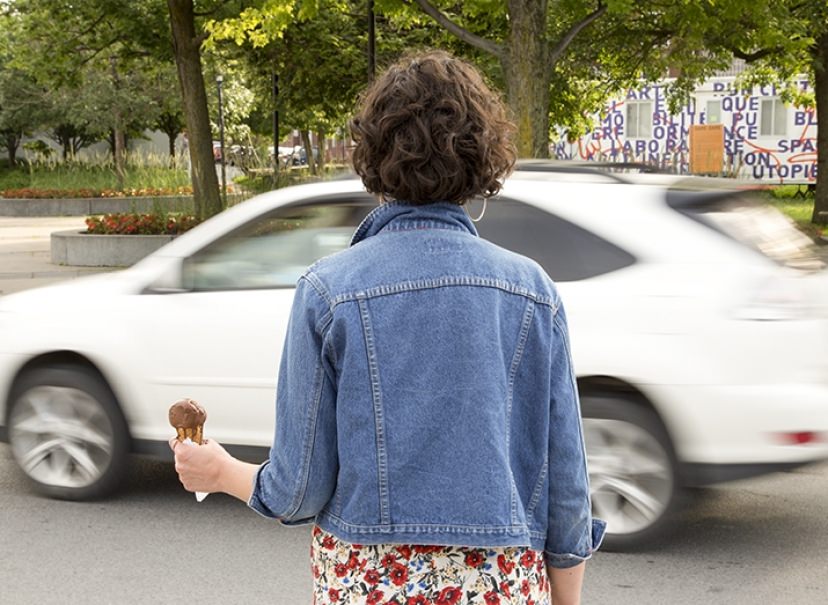 Ongoing from July 10 to 15, 2017, between 10 AM and 6 PM, near the Atwater Market, in the area formed by the crossing of the Atwater Avenue, the Lachine Canal and the Greene Avenue.

This project is the result of a long reflection on the relationship between repetition, performance and language. It is about organizing a performance in collaboration with a group of performers that will undertake many distinct actions in public space. Each of these actions will be repeated seven times a day in the same spot during the week.

Interventions are drawn from everyday events. That being said, it is only because of their repetitive nature that the public will notice theses gestures. They will sometimes trigger an impression of “déjà-vu”, generating a feeling of familiarity between the present moment and a fictional past. Through this elaborate and repetitive process, I seek to challenge the authenticity of communal experience while proposing a different approach in performance art.

I conceived this project to last a very long time within a specific space. In this regard, this intervention could be eventually be considered as a permanent work of art. If such a thing happens, we will see a new wave of performers re-enacting every year the same gestures of their predecessors.

My work addresses the notion of memory, value and exposure within a world heavily affected by technology, globalization and governmentality. I regularly use performance and repetition to reveal the modalities that form the language of everyday life. From this emerges a critique and a mistrust of these ways of constructing reality.

Adriana Disman is a performance art maker, writer, and organizer. Her current work deals with labour as well as self-wounding. Her thinking and making practices are embedded in her identities as a mixed-race queer femme woman settler, amongst other things.

Originally from Saskatoon Saskatchewan, Anastasia Ferguson moved to Montreal in 2009. In 2011 she was accepted into Concordia’s Mel Hoppenheim School of Cinema, where she completed her BFA in Film Production. She is currently an MFA candidate at Concordia University specializing in Intermedia. Themes within Anastasia’s practice is the idea and application of sensorial or affective experiences. As such, her practice contains a strong emphasis on the senses, the fantastical, and altered states and realities. At the core of Anastasia's practice is the idea of experience and, in particular, affective experience. Through the use of imagery and symbolic gestures, she strives towards a sense of universality or universal experiences. These experiences or sentiments are often untranslatable into oral or written language, and instead these experiences function on levels interpreted through the body, experienced through the body.

As a starting point, the performative. Steven Girard understands the performative in the same sense as Jan Świdziński: "transform something by". Moreover, his projects are characterized by the devaluation of compulsory adherence to a social and economic function and the crisis of confidence that it creates. This resistance called for by this crisis of confidence takes the form of an escape where no act is assignable to its body. Through various long-term projects - often with a protocol - he tries to maintain visibility and invisibility, in order to criticize the fact of exposing oneself. His performances, manoeuvres, installa(c)tions, interventions, video-performances, conference-performances, exhibitions were presented most notably at Le Lieu, centre en art actuel in Quebec City (QC) in 2015; In Buenos Aires (Argentina) during the Ars Continua event in Peras de Olmo in 2016 and in Yaoundé (Cameroon) at the Yaoundé Visual Arts Meeting (RAVY) in 2016.

Francisco Gonzalez-Rosas is a Chilean performance and media artist. After obtaining a BA in acting, his practice focused in combining stage shows with audiovisual and digital sources towards an interdisciplinary approach to theatre. From an artistic-curatorial perspective, he created individual shows as well as collective experiences with artists from different backgrounds. Currently, his work is located at the intersection of sound, video, performance and installation, exploring questions on identity, self-representation, gender, race and sexuality. Moreover, the relation between these and the quotidian use of technology.

The practice of Manoushka Larouche takes shape first and foremost in performance and then deploys through different mediums such as manoeuvre, photo-performance, video-performance and contextual performance. She deals primarily with the relationship she elaborates with the image - understood as a desire, such as the fixation of a thing or a being - to explore the threshold of visibility between the there-is and the there-is-not. The act of performance is an attempt to be at the limit of the image, to detach itself from what it thinks to be. The impossibility of accounting for what is elusive is therefore important in her practice.

Fanny Latreille is an emerging artist and cultural worker. She is currently pursuing a master’s degree in arts visuels et médiatiques at UQAM. Her works revolve around popular cultures, their collective memory and the nostalgia that is attached to it. Approaching her subjects with the idea of copyleft, her work is built with the active participation of artistic and activist communities. She involves them directly by using their archives, testimonies and collaborations as the primary materials of her artworks. We have seen her work in group exhibitions and special events at Z Art Space (2016), Espace Projet (2015), Art Souterrain (2015) and La Centrale (2015).

Helena Martin Franco, born in Cartagena, Colombia, lives and works in Montreal since 1998. She holds a master's degree in visual and media arts from the Université du Québec à Montréal and is actively involved in the network of artist-run centres in Montreal. She is part of several collectives for the dissemination of visual arts, including one in Quebec: L'Araignée, a collective for the diffusion of contemporary art. From a gendered perspective, she establishes links between these groups and cultural organizations in order to encourage encounters and exchanges of artistic practices, particularly between Canada and Colombia. Her interdisciplinary practice explores the mixing of different artistic processes and the hybridization between traditional techniques and new technologies. Her work revolves around the question of the changing identities in immigration circles. She has been presented in the Dominican Republic, Spain, New Zealand, Colombia, the United States, Argentina, Cuba and Quebec.

Victoria Stanton is an interdisciplinary artist and researcher/curator/educator working with live action, human interaction, video, film, photo, drawing, and writing. Exploring within diverse media, while the outward results of her practice manifest in various forms, performance is the invariable core of her research. Her time-based work includes performance for stage and for the camera, infiltrating actions in public spaces, and one-on-one encounters in intimate contexts. Investing a performative presence and consciousness within multiple spaces/times, she continuously underscores the complex aspects of “transaction” and the possibility for transformation. Considered a pioneer of transactional practices in Quebec, Stanton has presented exhibitions, performances, interventions, and films/videos in Canada, the U.S., Europe, Australia, Japan and Mexico. Her first book Impure, Reinventing the Word: The Theory, Practice and Oral History of Spoken Word in Montreal (conundrum press, 2001), co-authored with Vincent Tinguely, chronicled a vibrant artistic movement via interviews with over 75 artists. Her second book, The 7th Sense, co-authored with the TouVA collective (Sylvie Tourangeau, Anne Bérubé and Stanton), draws upon a profound exploration of “the performative” in performance art (SAGAMIE édition d’art, 2017).