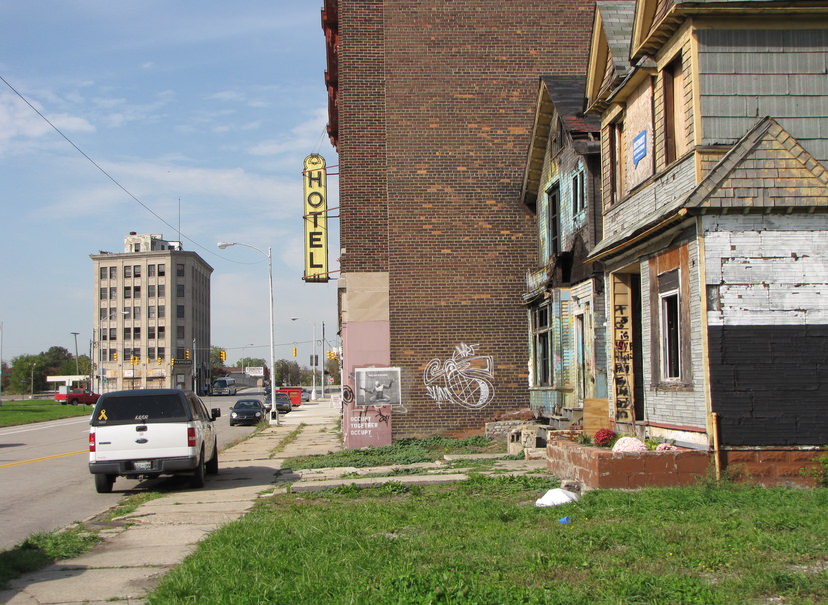 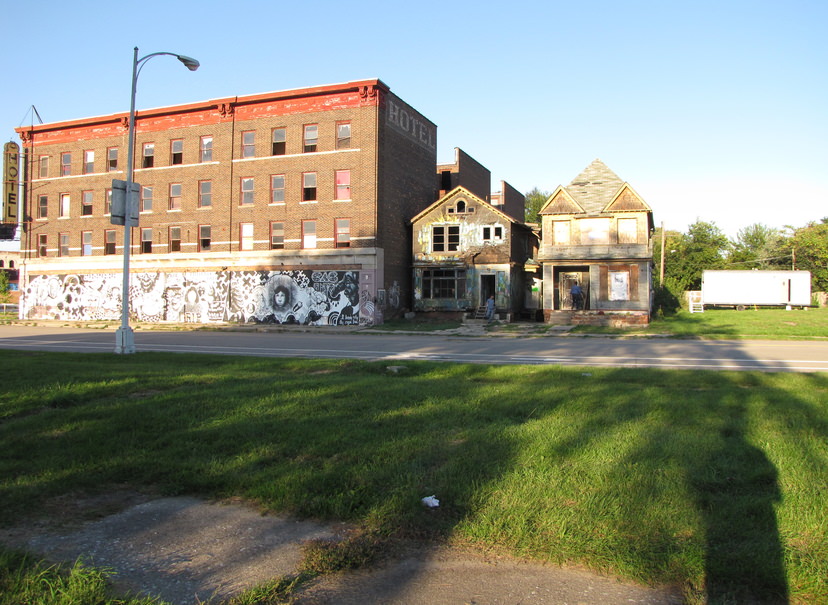 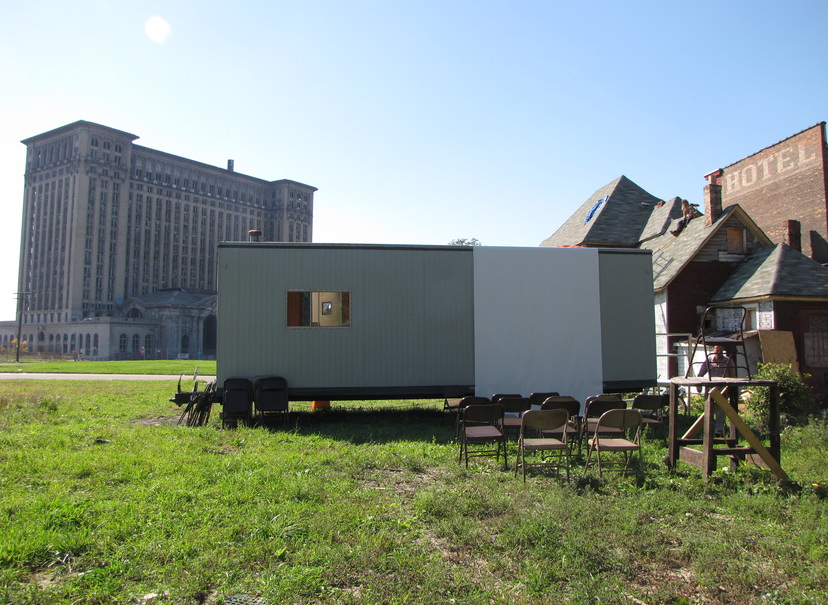 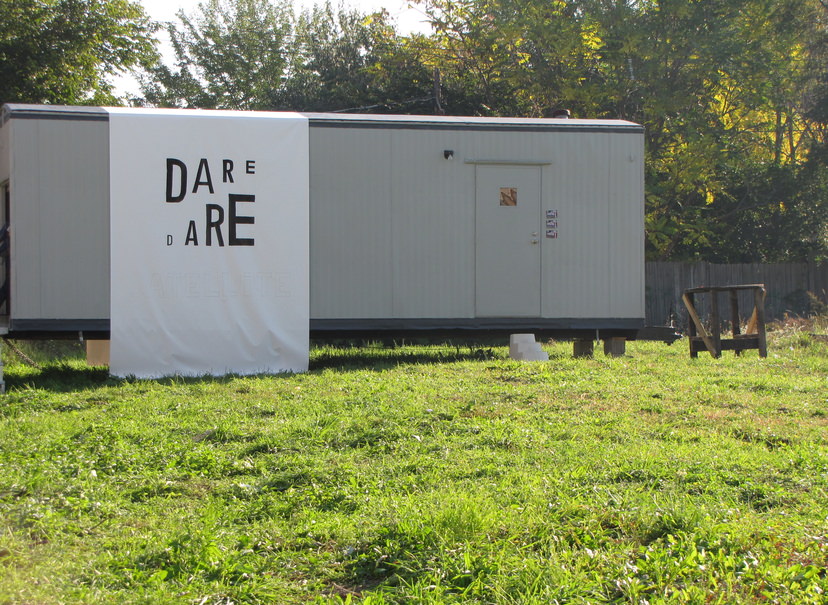 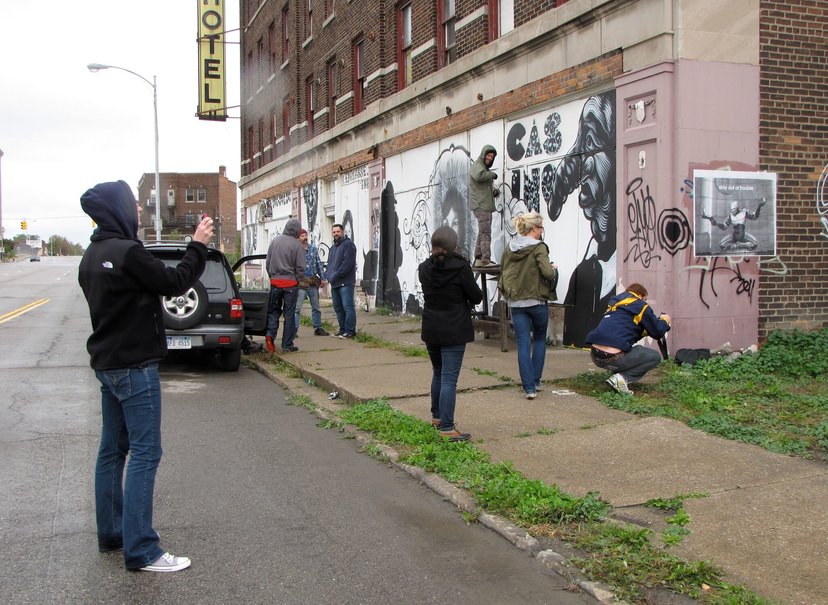 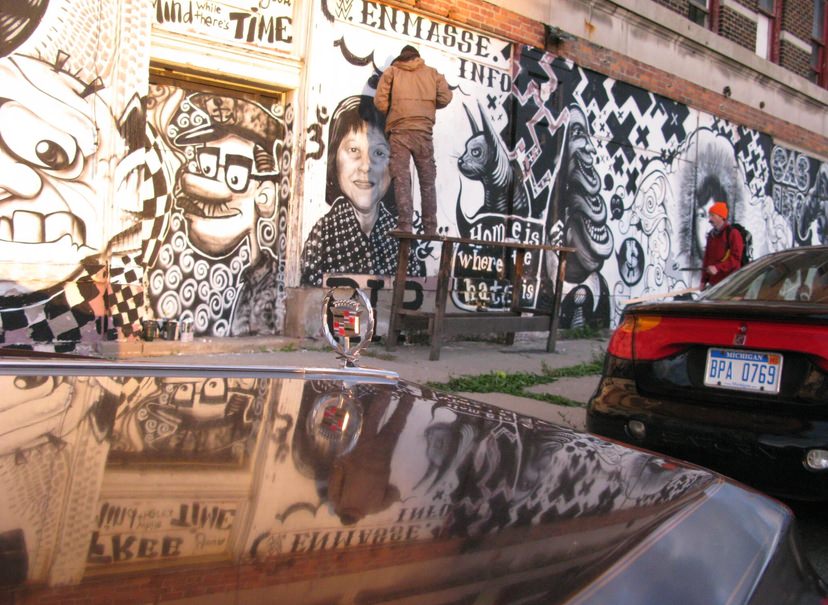 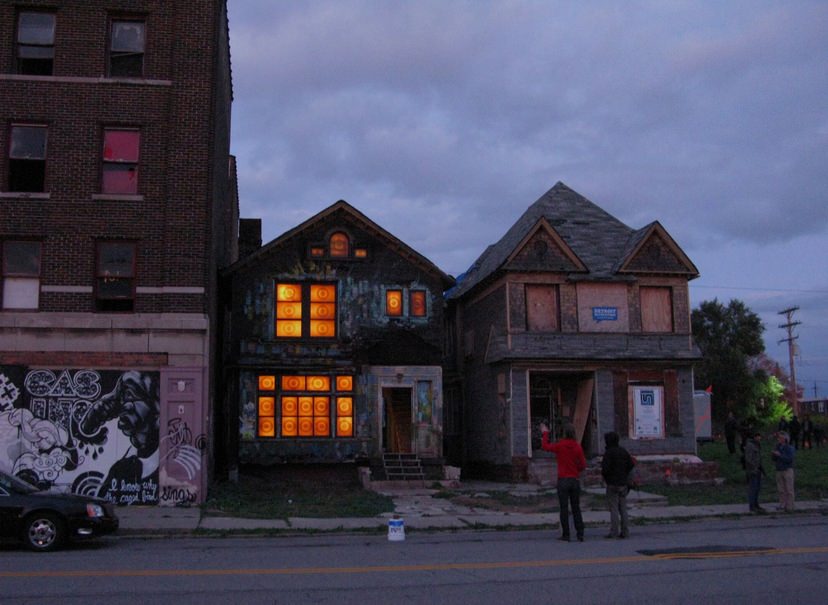 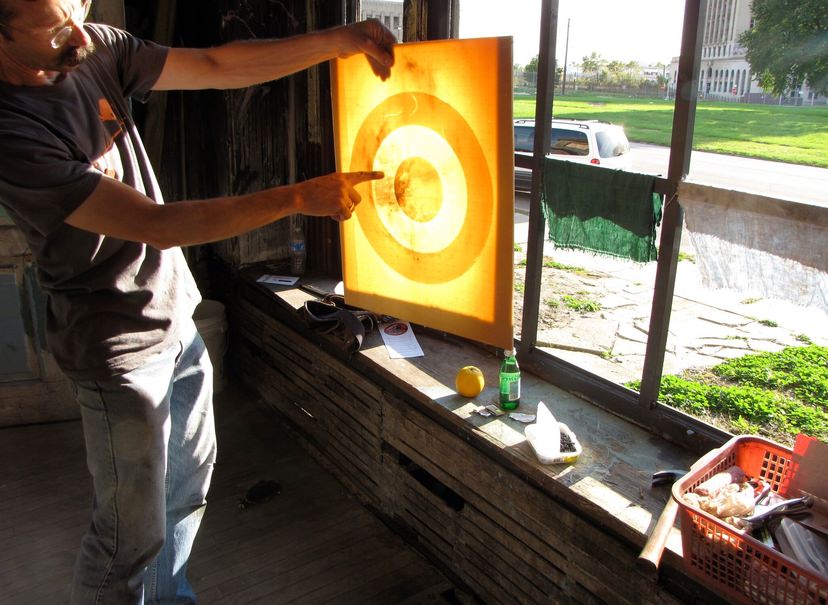 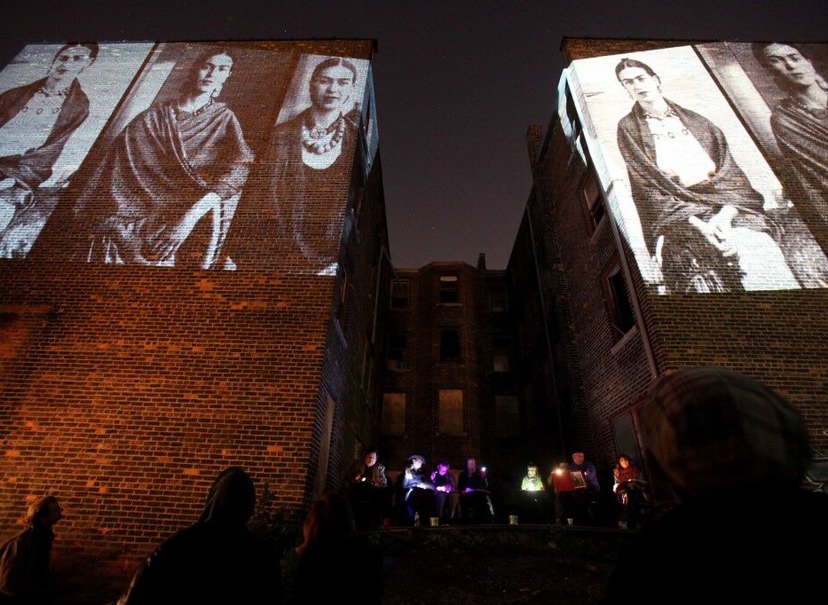 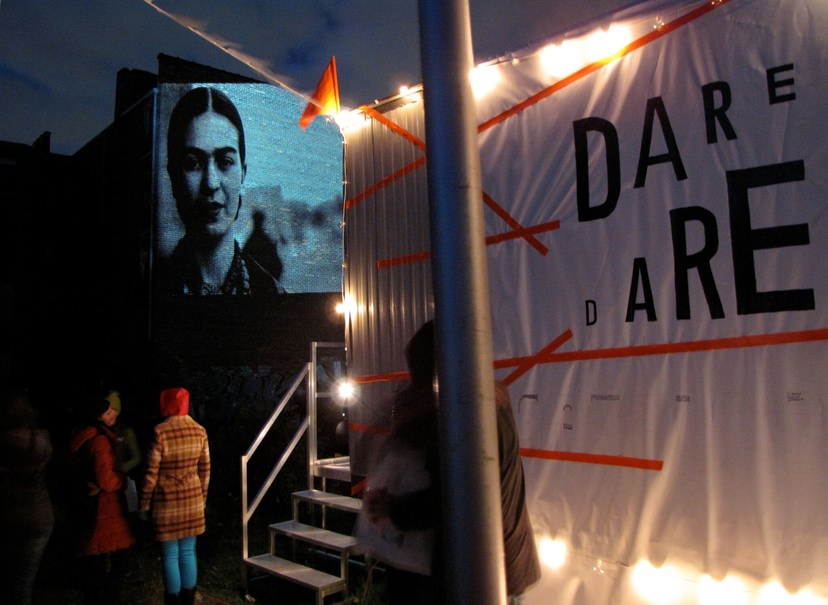 In Detroit, it was on the grounds of the artistic organization The Imagination Station that DARE-DARE was able to moor its headquarters, in a trailer rented for the occasion.

The Imagination Station is a non-profit project founded in the summer of 2010 by Jerry Paffendorf and Mary Lorene Carter. His original mission was to establish a creative campus in Detroit; to think and take innovative action on community, technology, sustainability and the arts.

The headquarters of The Imagination Station, located on 14th Avenue, are located in two abandoned properties (dating from 1890 to 1900) and adjacent vacant land. The site faces Roosevelt Park and the famous Michigan Central Station in the Corktown area of ​​Detroit. Private investors bought both properties after a fundraiser. Volunteers supported the re-development work.

Douglas Scholes, Jason Botkin and Louis Aguilar were selected for the excellence of their practice and for their ability to create ephemeral works in the public space, both critical and touching. Adrian Blackwell was invited to give a lecture on the demographic transformations, processes of population exodus and major urban changes in Detroit in the second half of the 20th century.

SATELLITE is an extraordinary networking project through which both DARE-DARE and participating artists have been able to create professional connections with American artists, institutions and cultural organizations. This includes the 555 Gallery Artists' Center, The Heidelberg Project, Pop Up Detroit, Border Bookmobile and the Detroit Collaborative Design Center at this first stop in Michigan's largest city.

o optimize the anchoring to the realities of the specific context of this city, DARE-DARE invited Louis Aguilar, a journalist and artist of the local community, to arouse the interest of the local artistic communities and to promote a stimulating exchange, allowing better understand in a few days the major current issues of this host city.

Meanwhile, in Montreal, regular programming was relayed with that broadcast abroad, including through festive evenings ORBITE October 13 at Bain Mathieu (duplex with DETROIT) and November 12 to the St. Edward's Church (duplex with TIJUANA). These two events offered the Montreal public an exceptional showcase of the experience and interventions of the participating SATELLITE artists. It was also possible to follow this great adventure through the website and the blog that was posted online at that time.

At age 16, Catholic administrators of St. Hedwig High officially declared Louis Aguilar “incorrigible”. Mr. Aguilar has eagerly tried to live up to the title. He is an award-winning reporter, which includes staff writing gigs at the Washington Post and Denver Post. He briefly ran Cruzando Fronteras Film Festival in Washington, D.C. and consulted the Smithsonian Institution on Latino programming. Since 2004, he has helped to report the epic nature of his native city for The Detroit News. In 2009, he wrote Long Live the Dead: The Accidental Mummies of Guanajuato, a book about a Mexican city’s complex relationship with 112 of its mummified citizens.

Since 2009, Jason Botkin has been involved in the creation of over 200 murals internationally, while exhibiting in solo and group exhibitions throughout Canada, the United States, and Europe. A graduate from the Alberta College of Art and Design in 1997 (with honors), his body of work includes the co-creation and ongoing direction of the EN MASSE project. This is an ongoing, multi-artist, black and white collaborative drawing initiative that depends upon an ever-expanding global network of visual artists drawn from diverse backgrounds. EN MASSE explores the boundary-melting aspects of individual artistic authorship toward the creation of a collective vision and effort, greater than any one could create on their own.

Adrian Blackwell is a visual artist, architect and urban designer, and his work deals with the uneven development of post-Fordist urbanization. During the winter of 2010, Hart House at the University of Toronto was the site of its Model for Public Space [knot] installation. He also helped design Toronto City Hall's Roof Garden, which opened in May 2010. In 2009, he designed and built Dymaxion Sleep in collaboration with Jane Hutton for the International Festival of Reford Gardens. He is a member of the Toronto School of Creativity and Inquiry and the editorial board of the journal SCAPEGOAT Architecture/Landscape/Political Economy that he founded. He has taught architecture and urban design at the University of Toronto since 1997, and has been visiting professor at Chongqing University and the University of Michigan.

Douglas Scholes was born in Montreal. During the period of economic and social change, his family moved out of the city to Barrie, Ontario. Later, Scholes moved his own family to Lethbridge, Alberta, where he completed a Bachelor of Fine Arts degree at the University of Lethbridge (1999). Previously, he was involved in various professions, including institutional cooking where he was able to combine his artistic inclinations with the logistics of setting up and ordering, as well as building homes, while raised his family. He then arrives in Montreal and completes his graduate studies in visual arts at the University of Quebec in Montreal (2001) while working at the Bellefeuille Gallery - again combining the pragmatic (art market) and his interests artistic. Since obtaining his master's degree, he has continued his sculptural, performative and installation practice in presentations and exhibitions in Canada, France, Ireland and Poland. Scholes is a fifth of the CRUM (Montreal Urban Research Center).