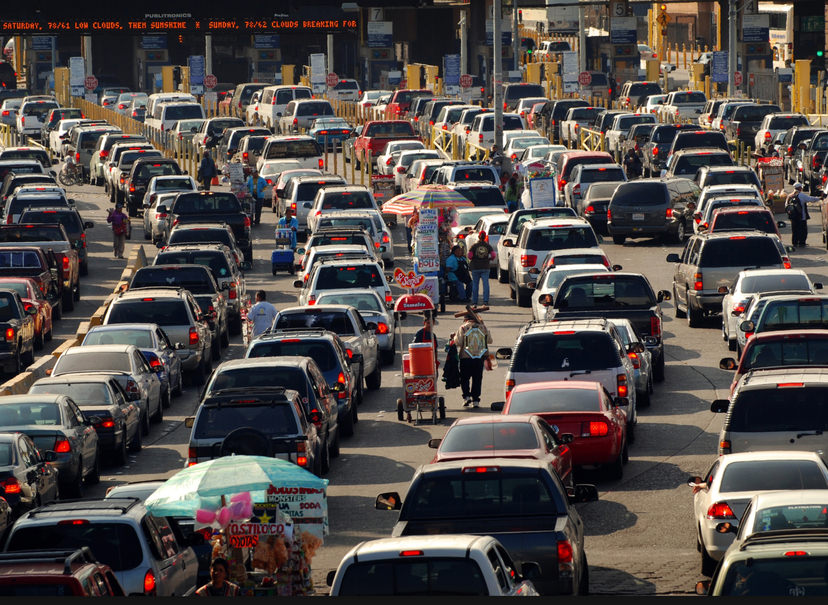 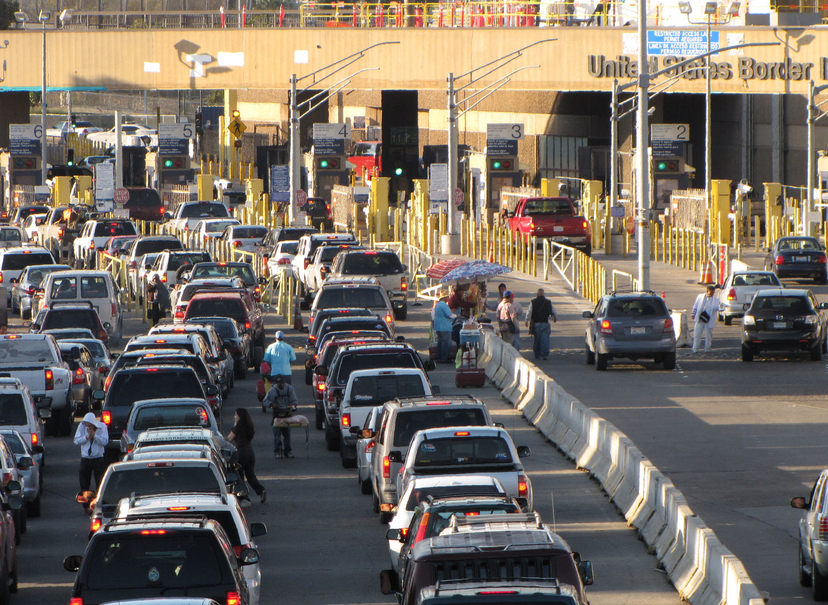 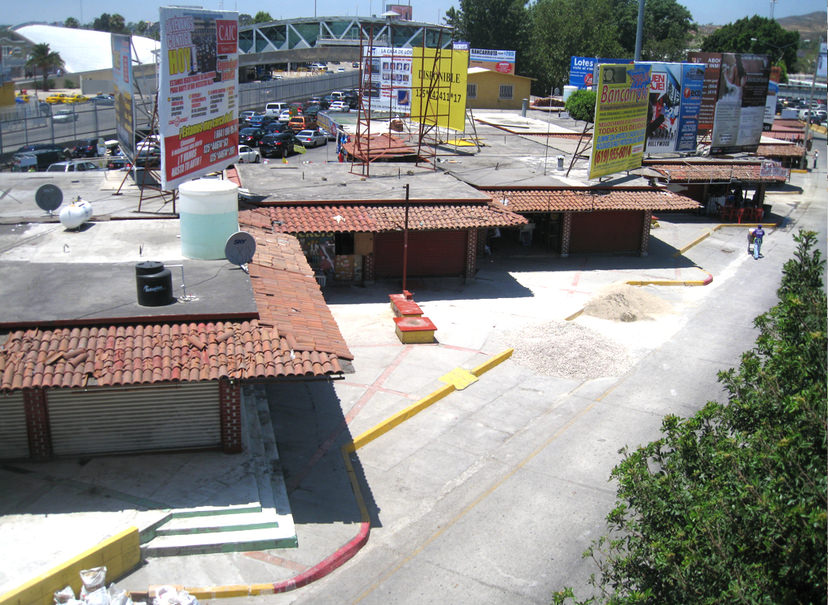 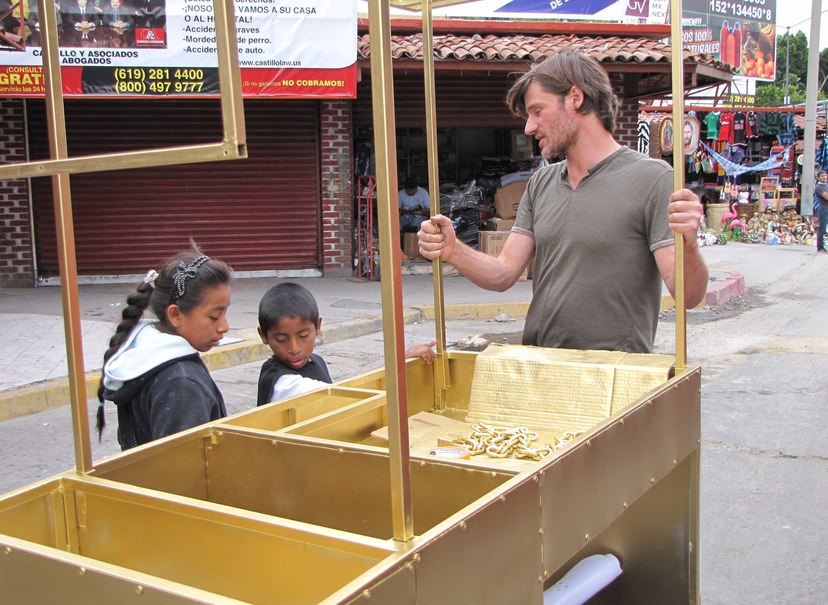 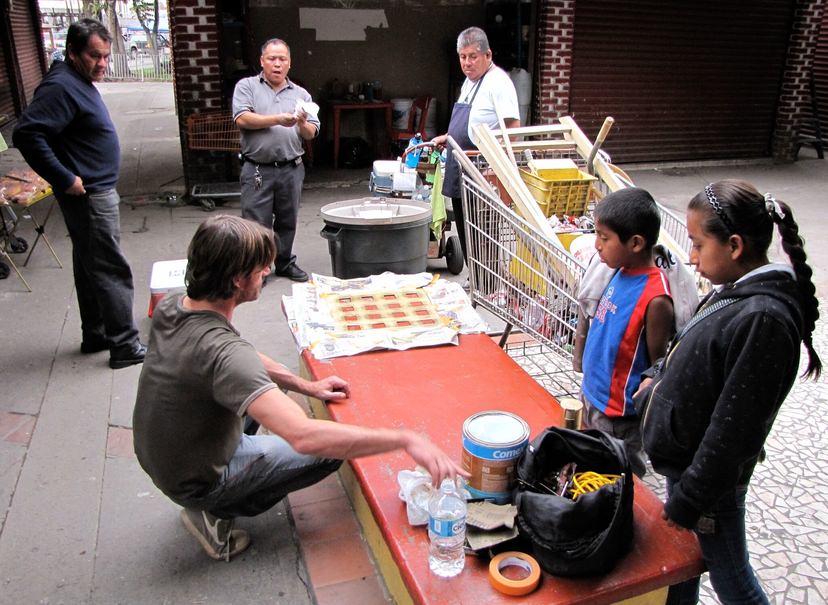 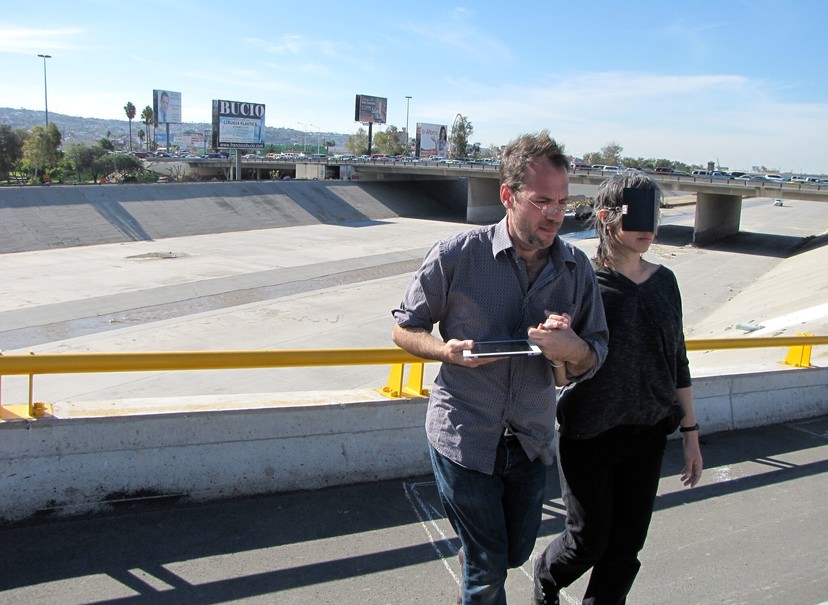 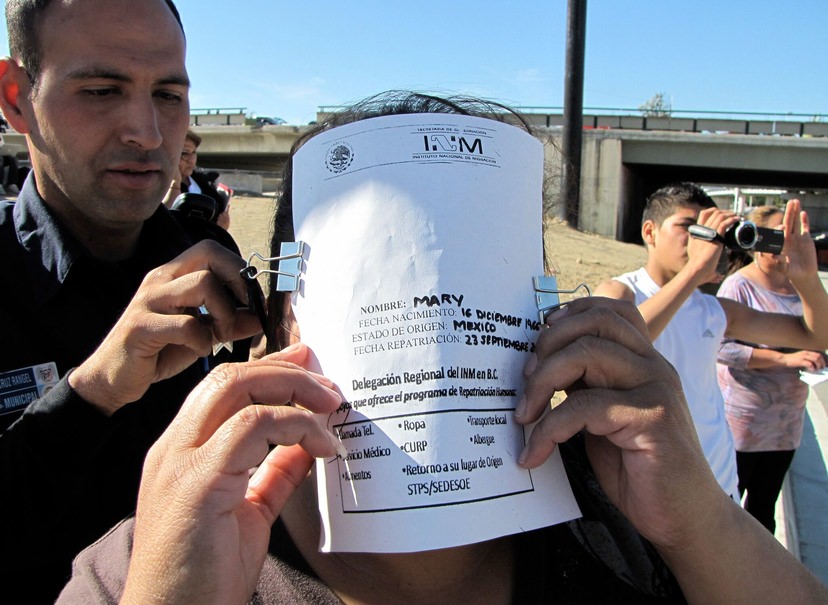 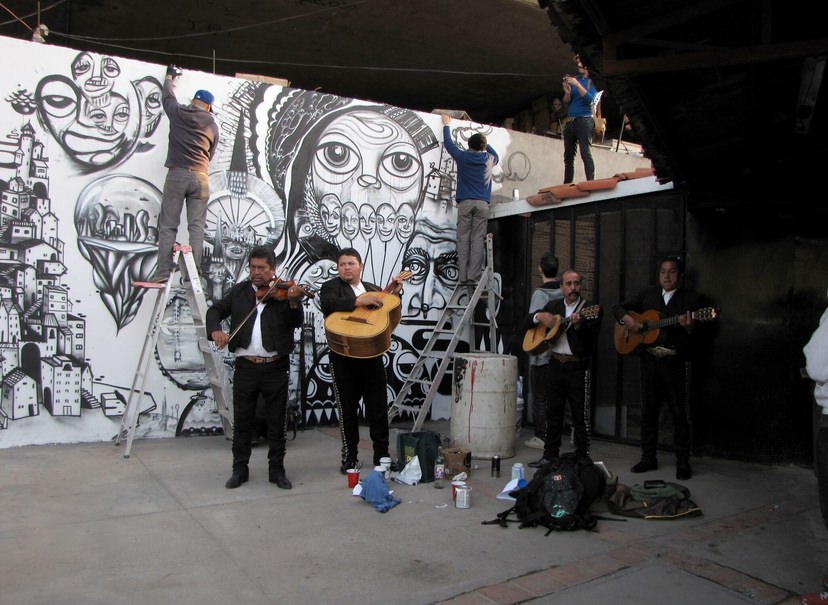 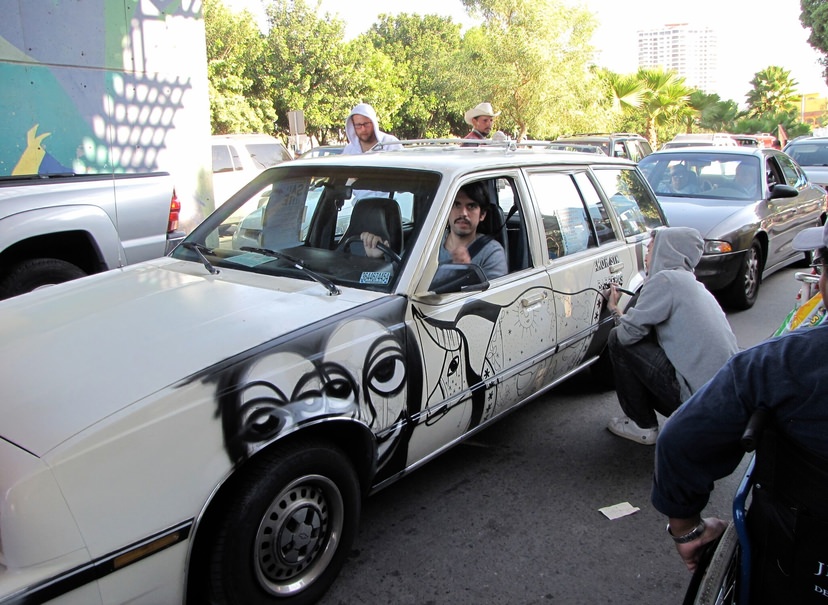 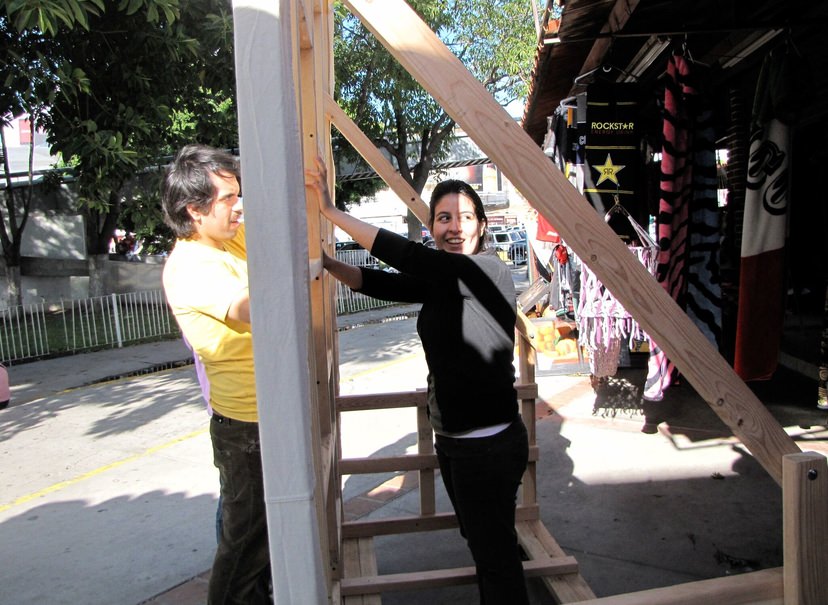 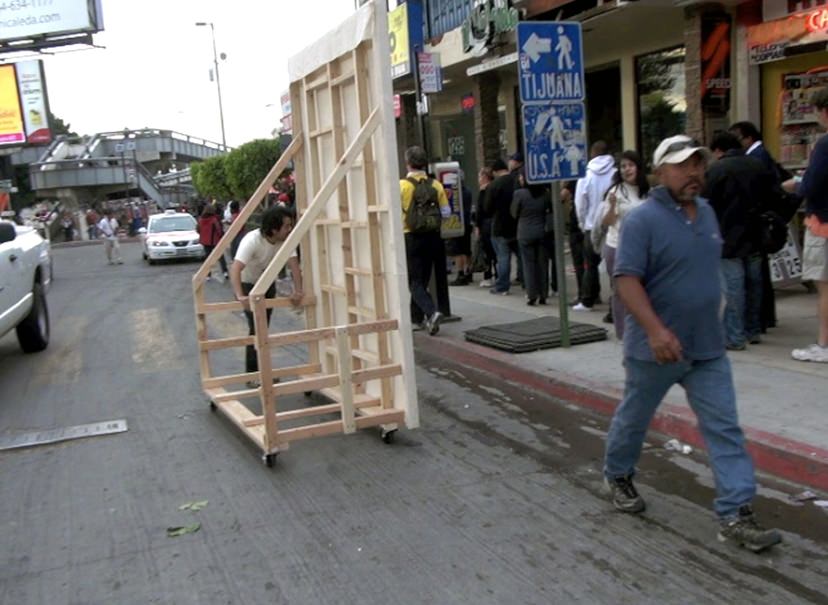 In Tijuana, a few meters from the San Ysidro border crossing, within the Mercado de Artesanías de la Línea (a small commercial mall), DARE-DARE was able to moor its headquarters; more specifically in the offices of the Unión De Yeso Y Plástico CTM (Trade Union of Plaster and Plastic Workers - manufacturers / sellers of trinkets and souvenirs).

It is thanks to Cog•nate Collective, a duo of artists trained by Amy Sanchez and Misael Diaz, that DARE-DARE was able to set its SATELLITE event at the Mercado. This piece of land was of particular interest to us because it opened up the possibility of developing artistic projects at the border in collaboration with market sellers; and even better, to be able to achieve in a short time interventions that do not have to involve or depend on approval or institutional and / or governmental support. Finally, the Mercado de Artesanías de la Línea is a free zone on one of the most regulated, patrolled and controlled sites on the planet.

By organizing to create a collective and joining the big unions like the CTM (Confedaracion de Trabajadores de Mexico), a group of about 120 sellers could buy the small piece of land where they worked. By buying this land, the sellers were able to secure a space to establish their businesses in the highly regulated site of the border.

The projects were designed and carried out by : Adaptive Actions, Constanza Camelo Suarez, Peru Dyer Jalea and Cog•nate Collective. These artists have been selected for the excellence of their practice and for their ability to conceive in a short time ephemeral works in the public space, both critical and touching.

SATELLITE is an extraordinary networking company through which both DARE-DARE and the participating artists have been able to create professional links with Mexican and American artists, institutions and cultural organizations: the University's Department of Visual Art from California to San Diego, the Instituto Municipal de Arte and Cultura (Baja California), the Instituto Madre Asunta, the Colegio de la Frontera Norte and the YMCA in Tijuana.

Meanwhile, in Montreal, regular programming was relayed to that broadcast abroad, including through the festive evening ORBITE, November 12 at the Church of St. Edward (duplex with TIJUANA). This event offered the Montreal public an exceptional showcase of the experience and interventions of participating SATELLITE artists. It was also possible to follow this great adventure through the website and the blog that was posted online at that time.

Adaptive Actions (AA), based in Montreal and started in London in 2007 by Jean-François Prost, is actively working to create an online bank for urban interventions (www.adaptiveactions.net). Through its open invitation to participate, AA becomes a think tank, generating diverse platforms for making changes in the urban environment. The Adaptive Actions laboratory supports minority causes and publicizes alternative urban life attitudes, counter-behaviors and urban artistic creations through which imagination and personal creation influence everyday life. AA's mission is to divulge existing actions and to encourage new creative activities to adapt the urban space. The AA platform is an incongruous mix of implicit or explicit, temporary or indefinite, spontaneous or sometimes more complex actions. Adaptive Shares (AA) operates as an open source deposit. It suggests iterations and transversal operations, new forms of connections and relationalities. AA invites creative resistance through the activation of various models of adaptation. Through various workshops, the production of publications, the participants highlight the main constraints they had to face and the strategies used to reconfigure them, so that they become creative engines, fascination and micropolitical activation.

Constanza Camelo Suarez is an artist and is interested in the theorization and diffusion of experimental art. His practice in art materializes territorial occupations conveyed by the body during performative interventions. The body, object and subject in action, explores various transdisciplinary devices operated during ephemeral cohabitations of public and private spaces. The body moves in non-places reactivating their contextual sense in situ. The union of the emergence of space, object and action aims to upset situations where poetics and politics influence each other. Constanza Camelo also holds a PhD in Arts Studies and Practices (UQAM) and works as a professor of interdisciplinary arts at the Université du Québec à Chicoutimi. She has published texts on in situ art and performance as well as issues related to art creation in a context of migration and interculturality. As an independent curator, she organized theoretical meetings and artistic exchanges between Canada and Latin America. Constanza Camelo is co-founder of the collective We are not Speedy Gonzales and researcher member of CELAT. She is on the board of directors of the artist center Le Lobe.

Trained in both traditional and digital art, PERU143 has found his vocation as a muralist and graphic designer over his 20 years painting graffiti. While distancing himself from labels and limits, he continues to explore his imagination through different mediums. In search of inspiration through his travels; his recent work explores the theme of home and home. For PERU143, imagination is not just a place of fantasy, but an expression of our inner connection between ourselves and our environment. The characteristic imagery of this artist draws some of his references in the cultural heritage of various pre-Columbian civilizations (Aztec, Maya, Inca). Totems, mythological figures, human-animal hybrids, composite imaginary cities, proliferating architectures form his graphic universe. By representing the fruits of his own imagination, the art of PERU143 seeks to remind us of the instinctive and light joy we all experience in meeting the world around us.

Cog•nate Collective (a duo formed by Amy Sanchez and Misael Diaz) develops research projects, public interventions and experimental educational programs in collaboration with communities in the border region, between the United States and Mexico. Since they began their work in 2010, their practice has challenged the evolution of the border, a division that is eliminated by neoliberal economic policies while being reinforced by policies that increase its militarization - tracing the collateral effects of these incongruous migrant communities on both sides of the border. As a result, their projects deal with migration issues, informal economies and the construction of collective identities through cultural consumption; proposing that the frontier not only exists (and should not exist) as a line of demarcation, but also as a region that expands and contracts with the movement of people and objects. The collective is currently working between Mexicali and Tijuana (Mexico) and Santa Ana and Los Angeles (California).