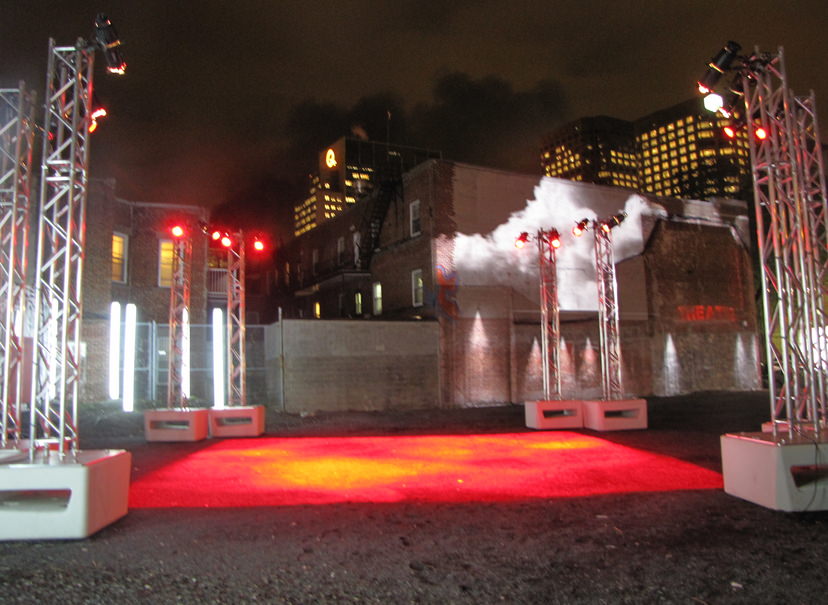 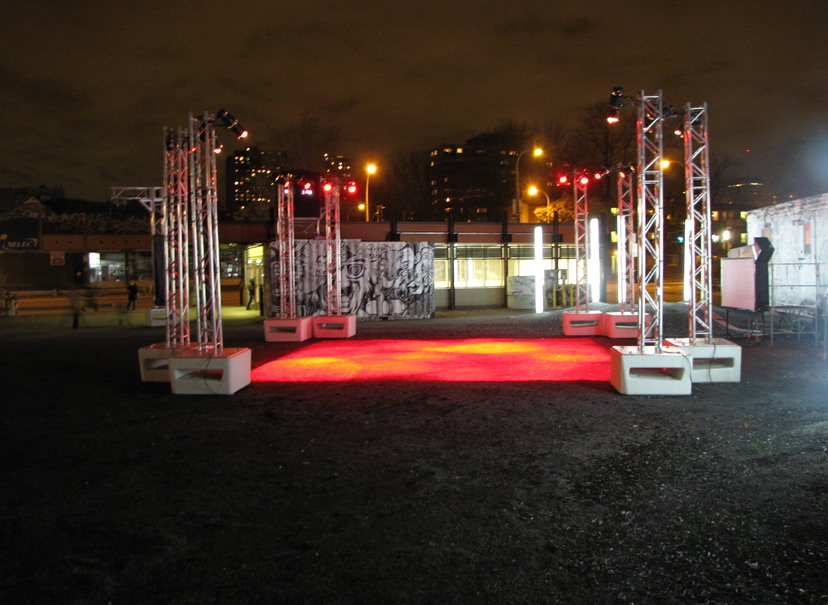 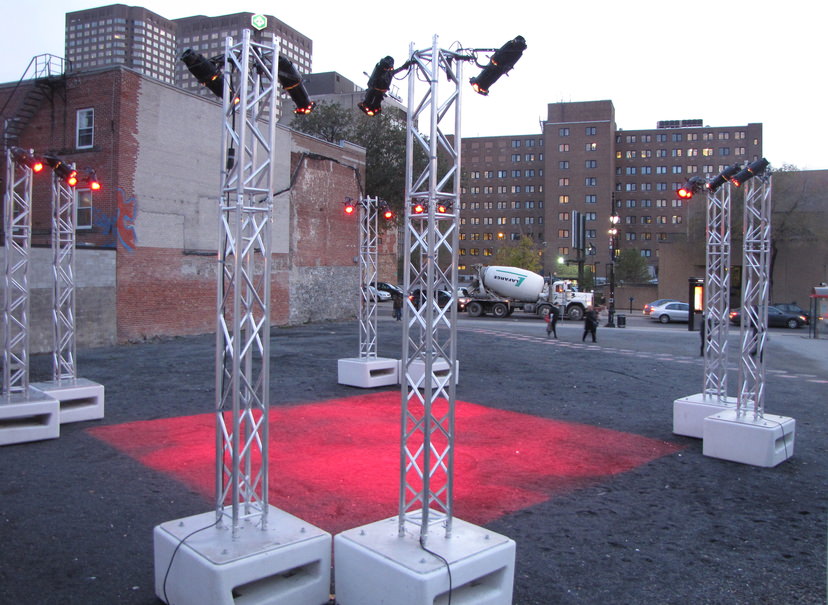 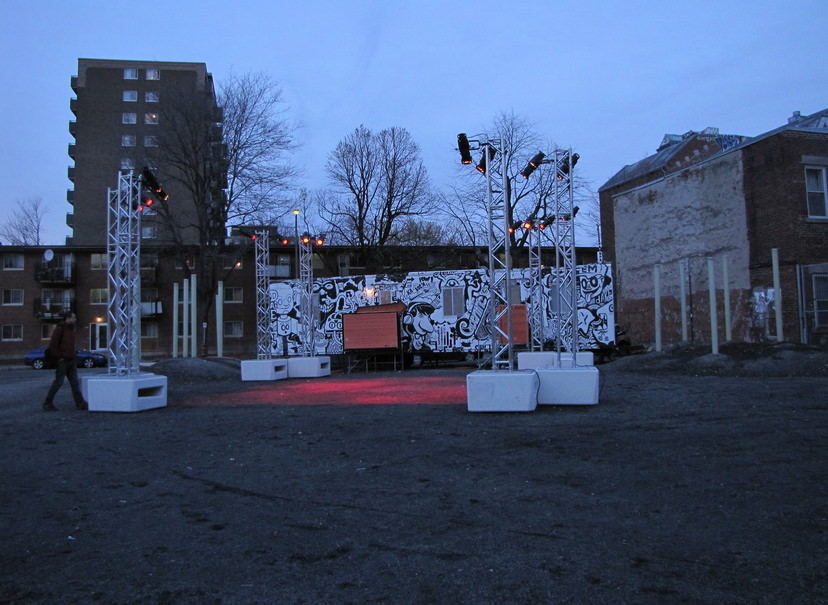 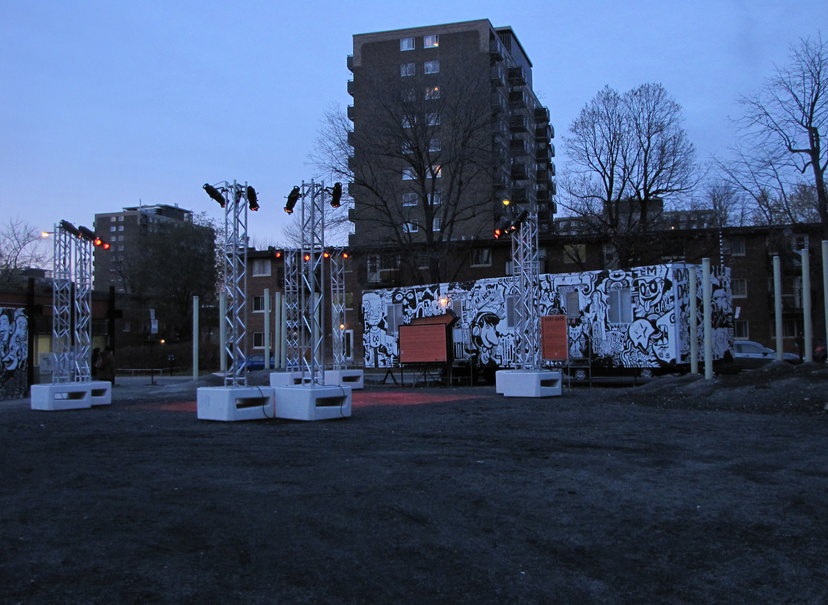 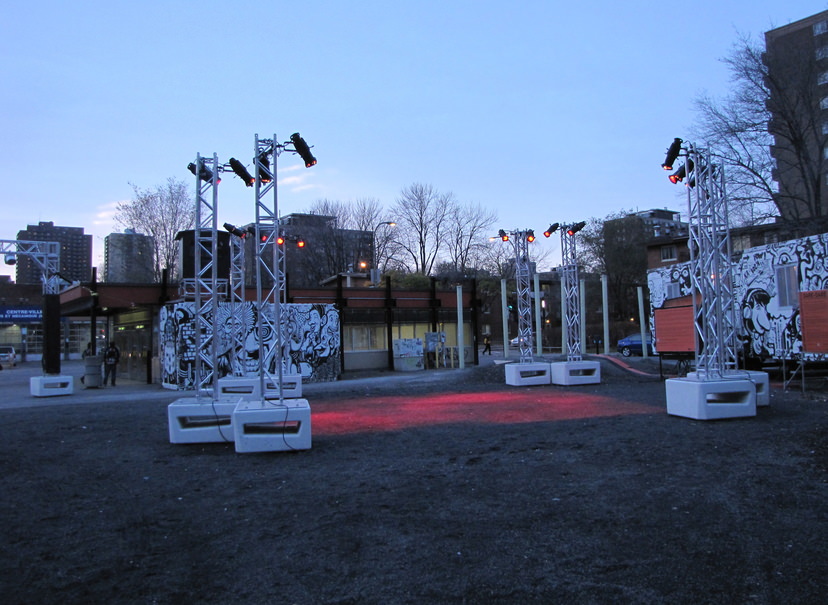 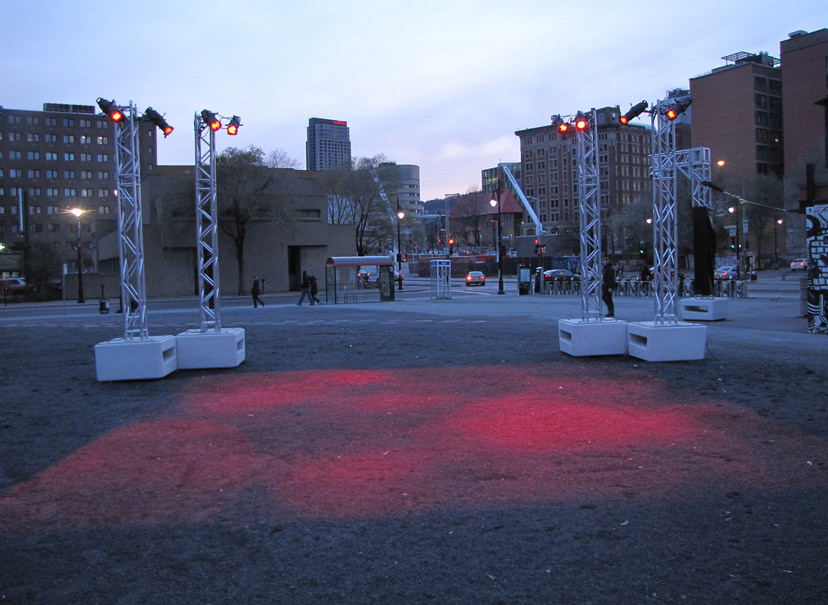 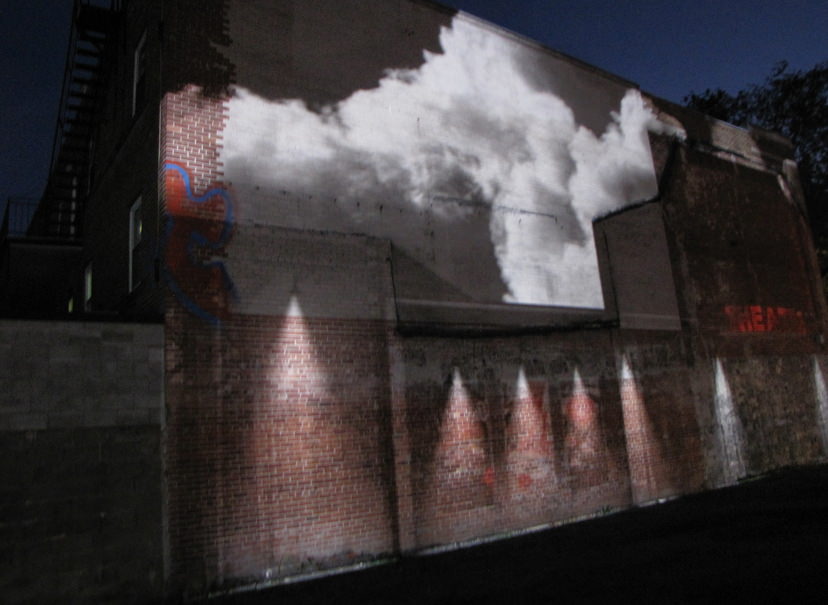 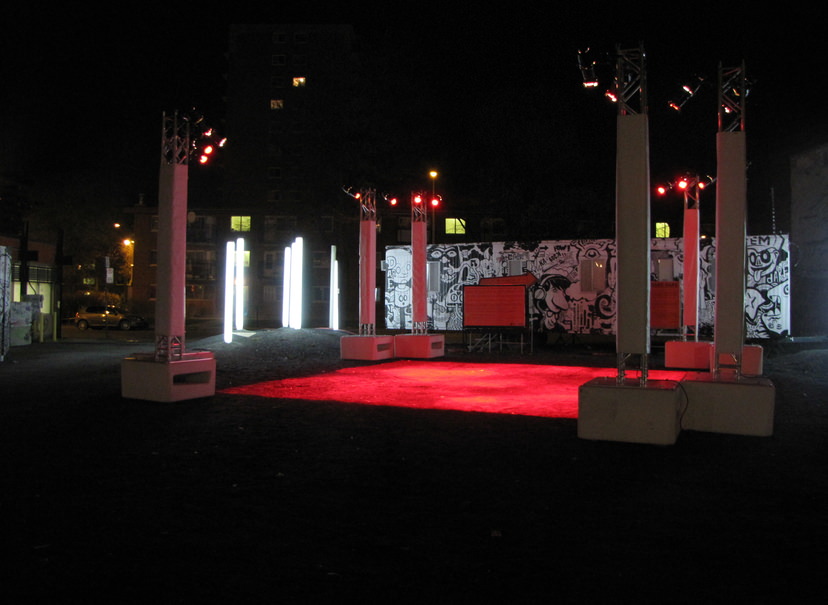 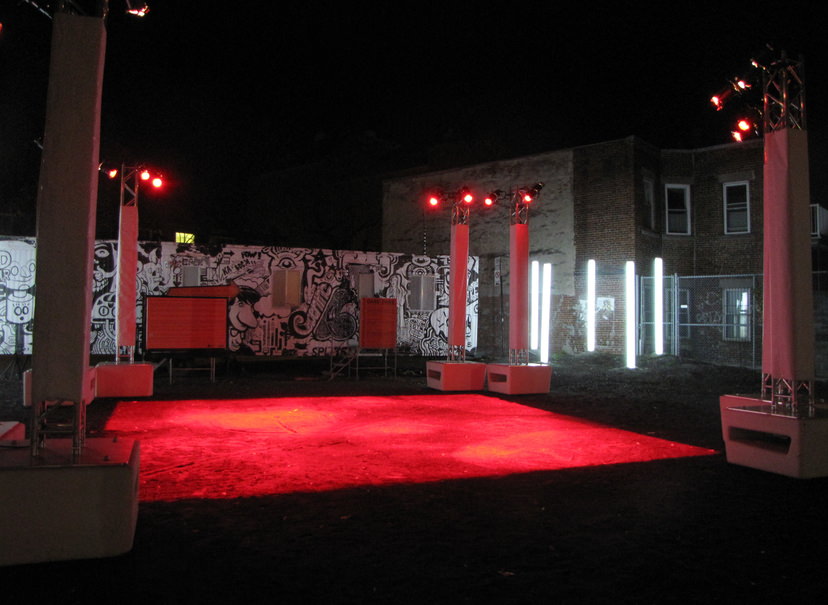 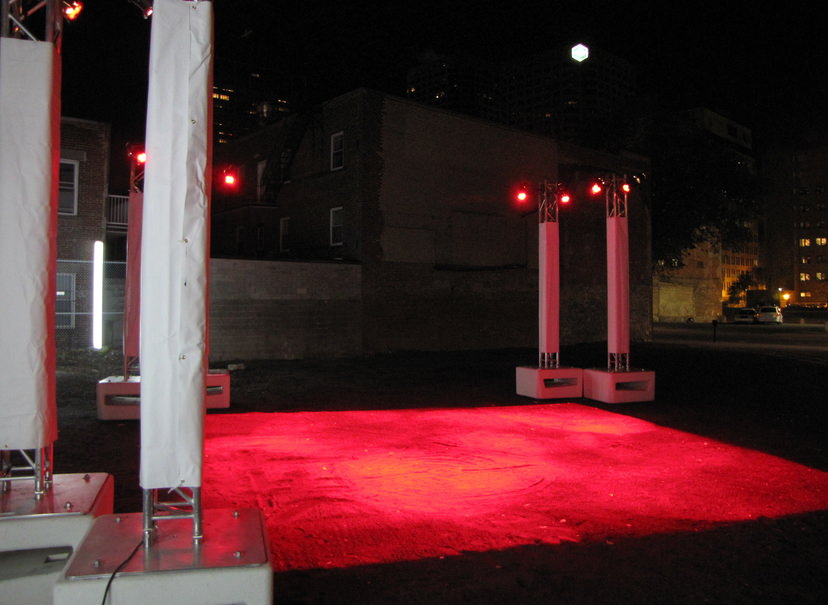 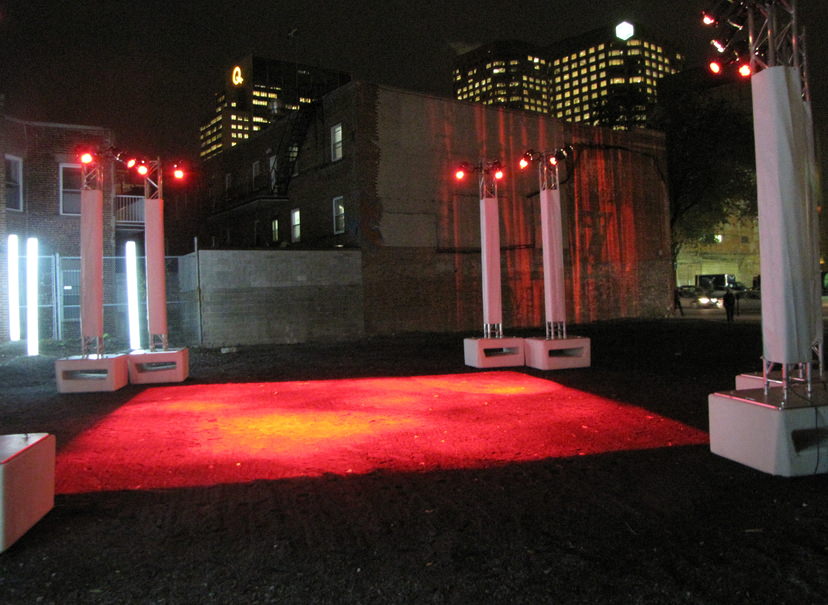 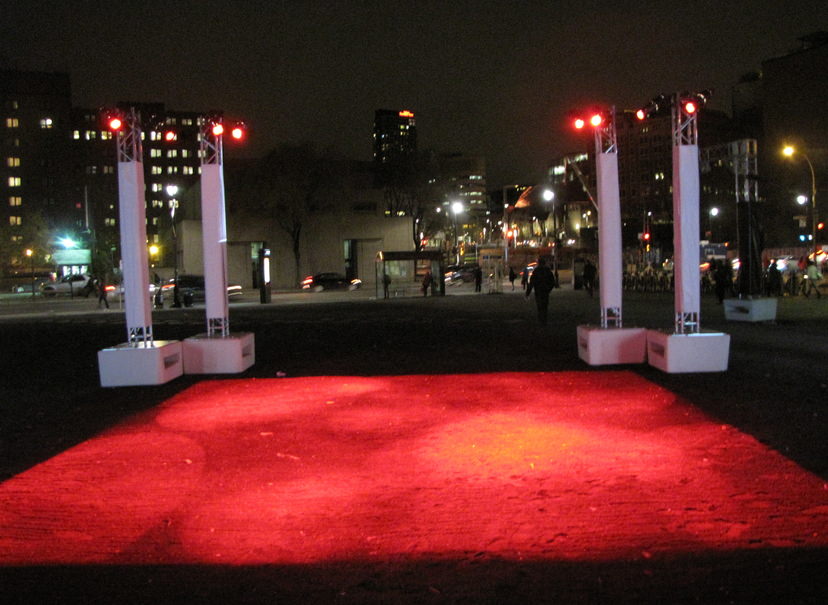 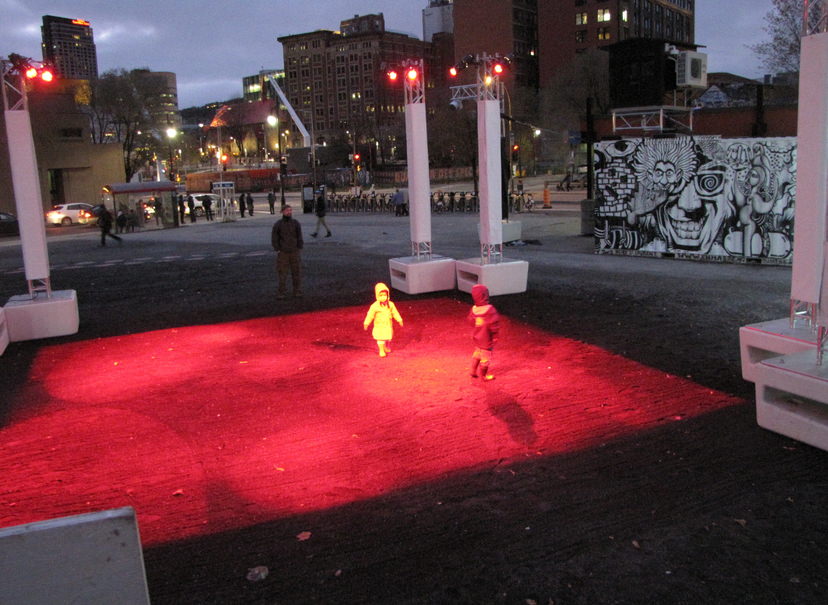 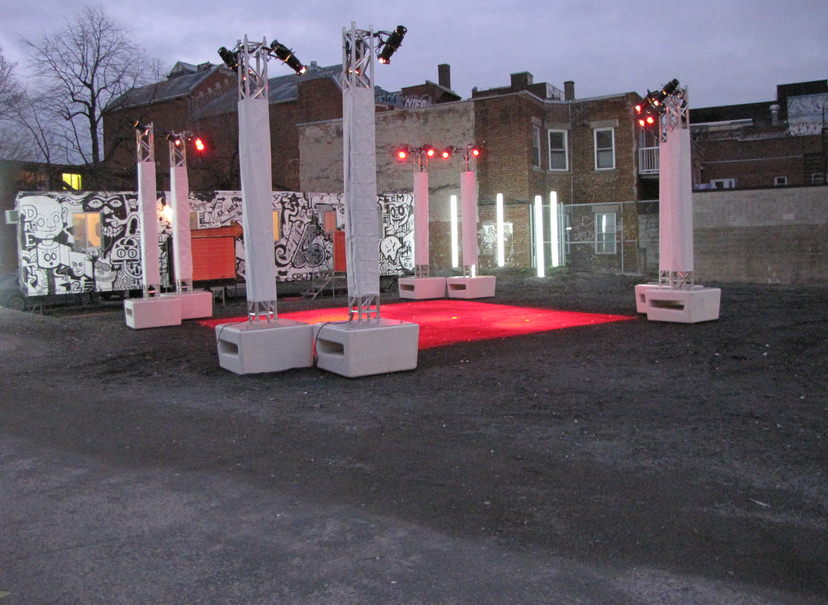 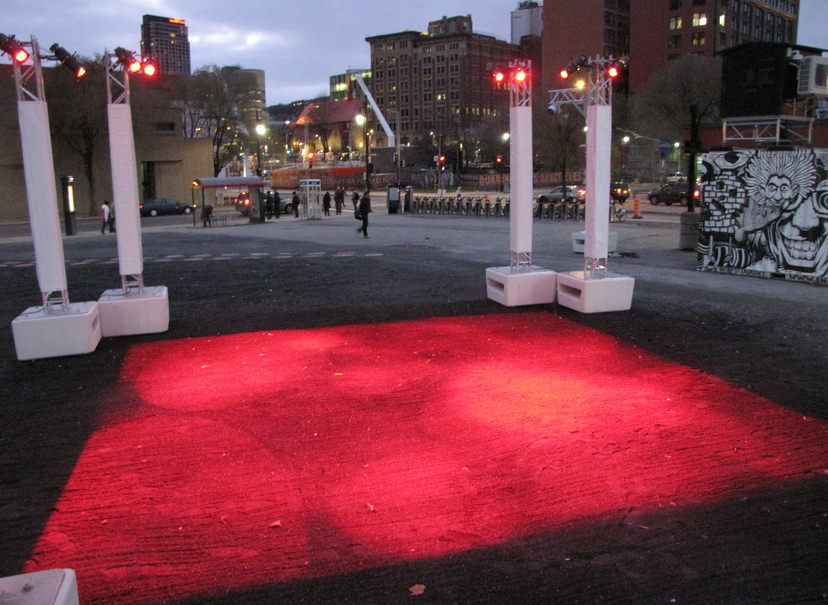 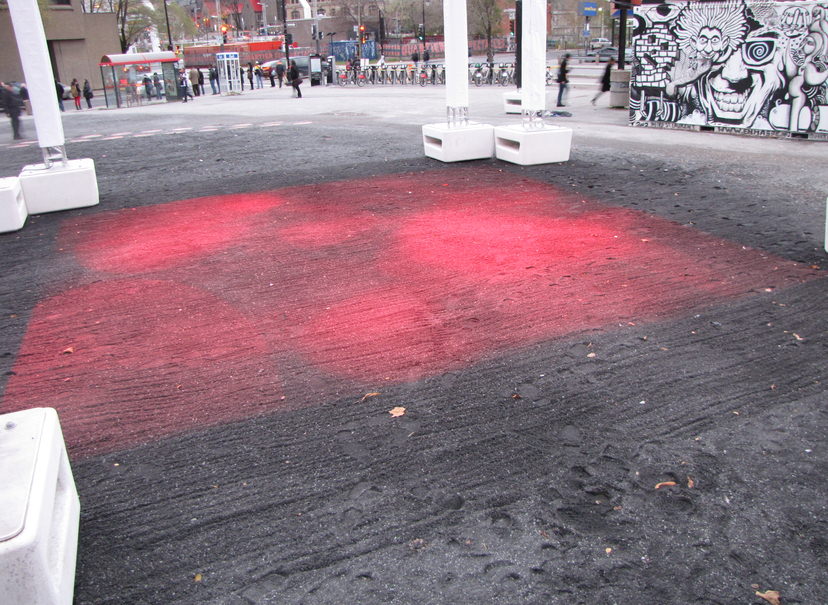 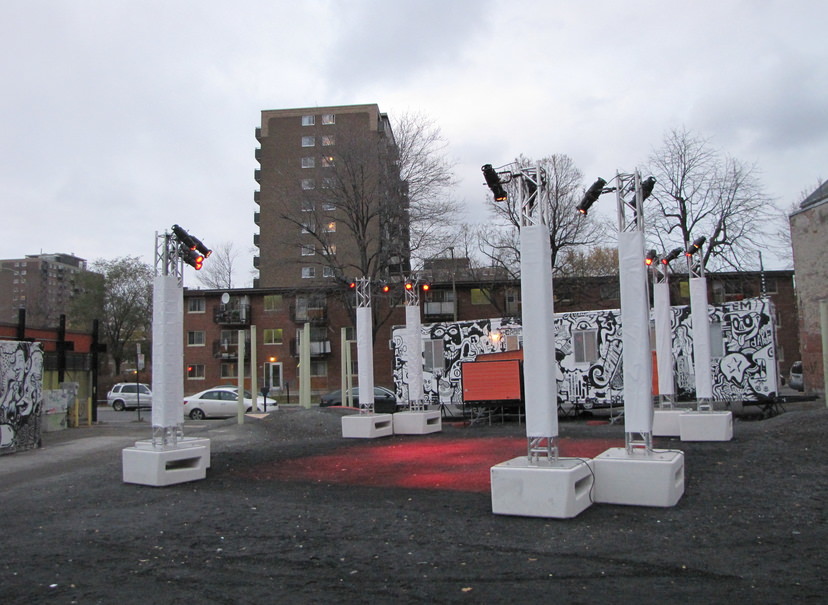 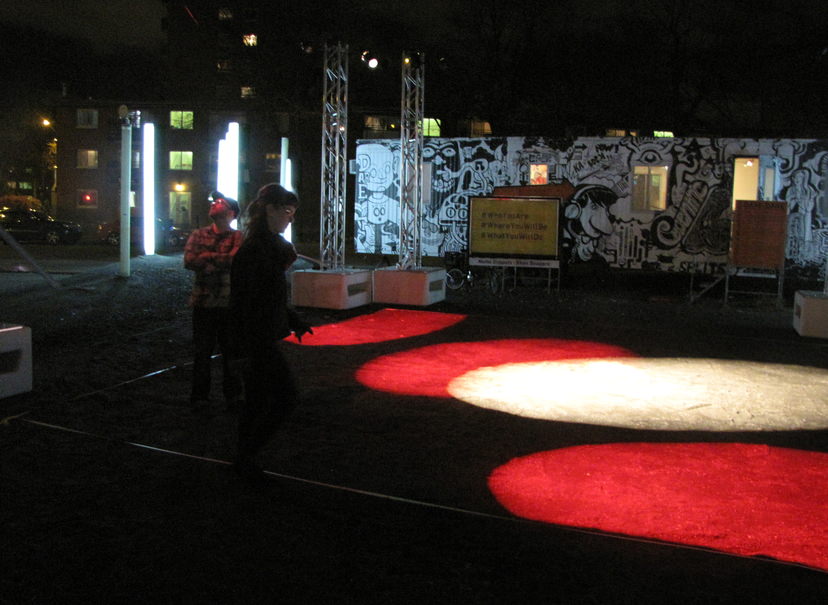 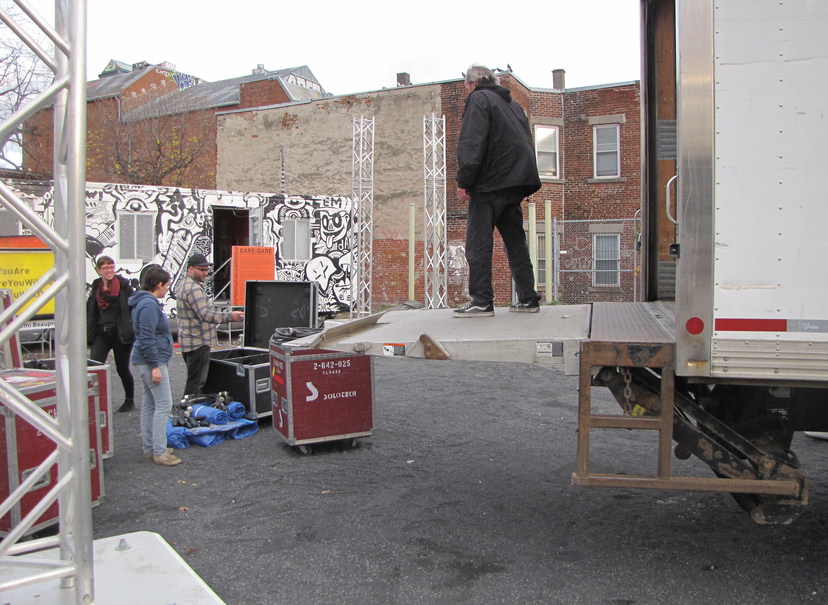 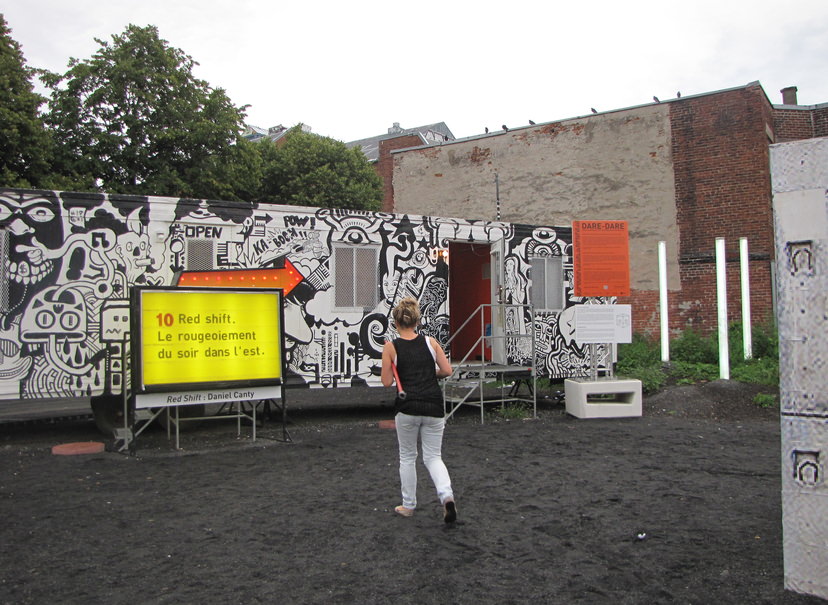 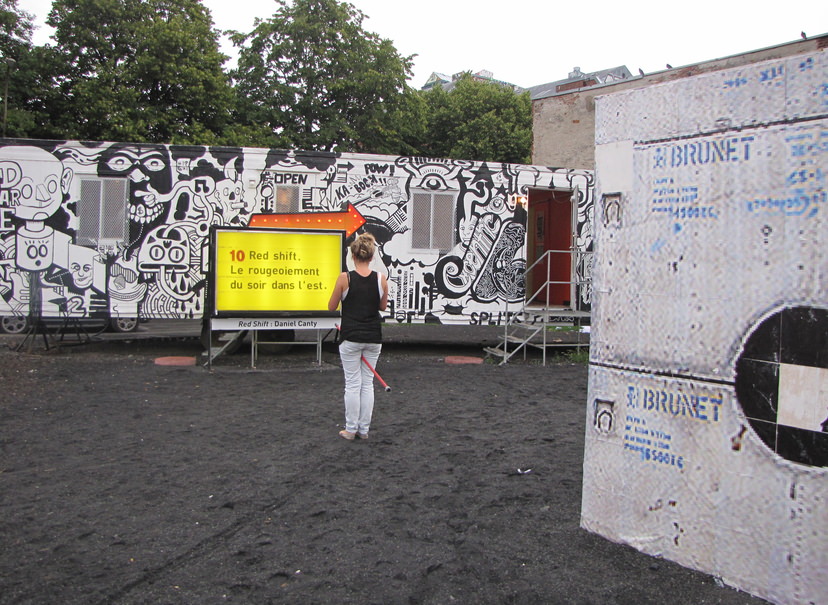 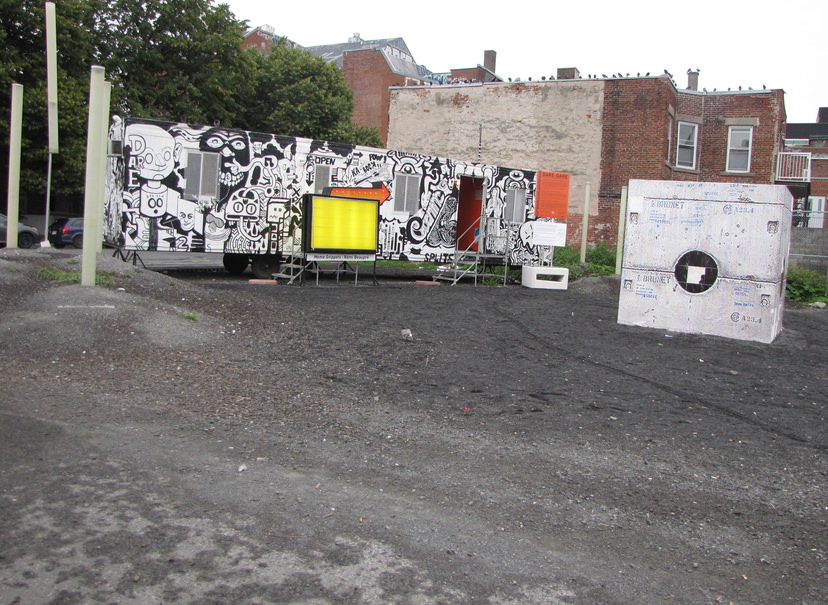 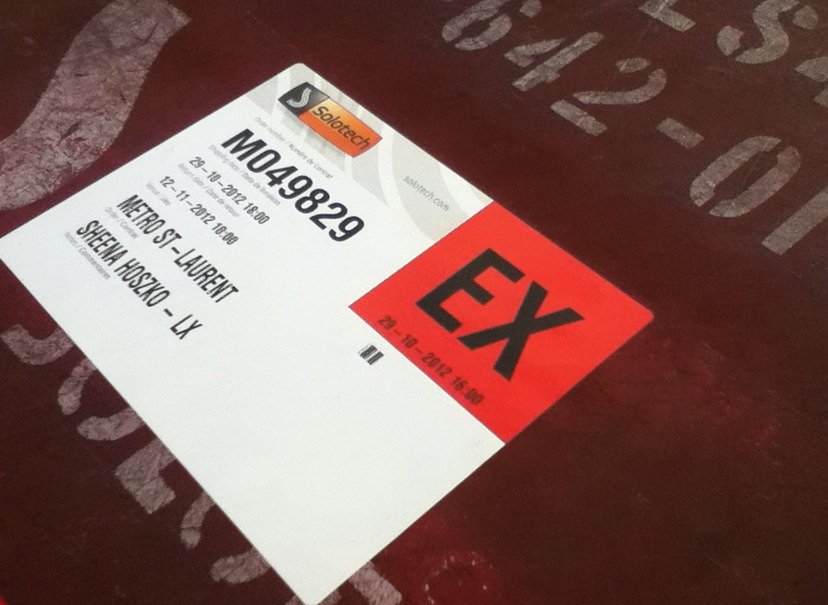 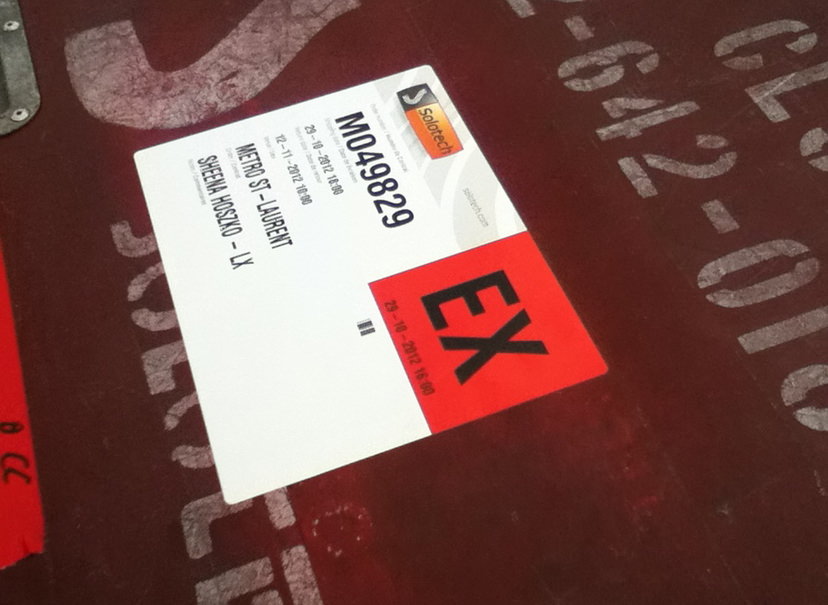 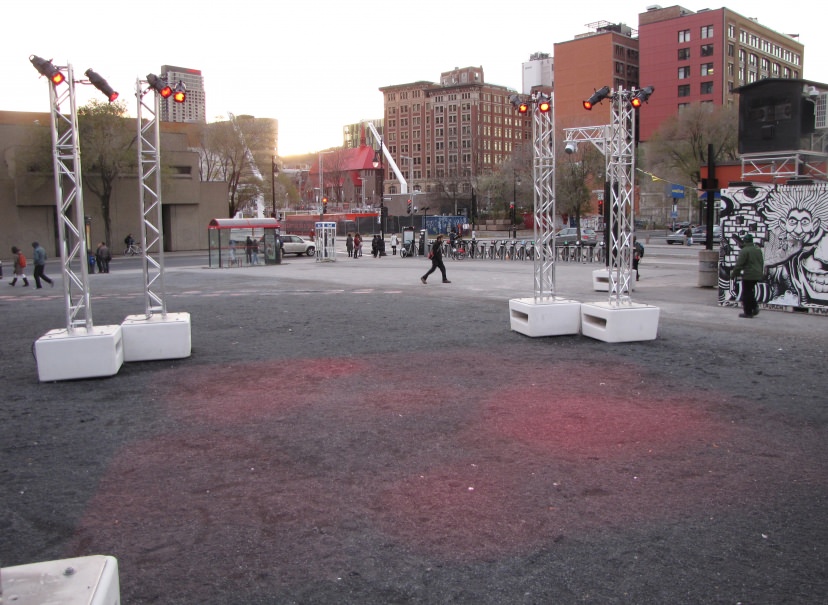 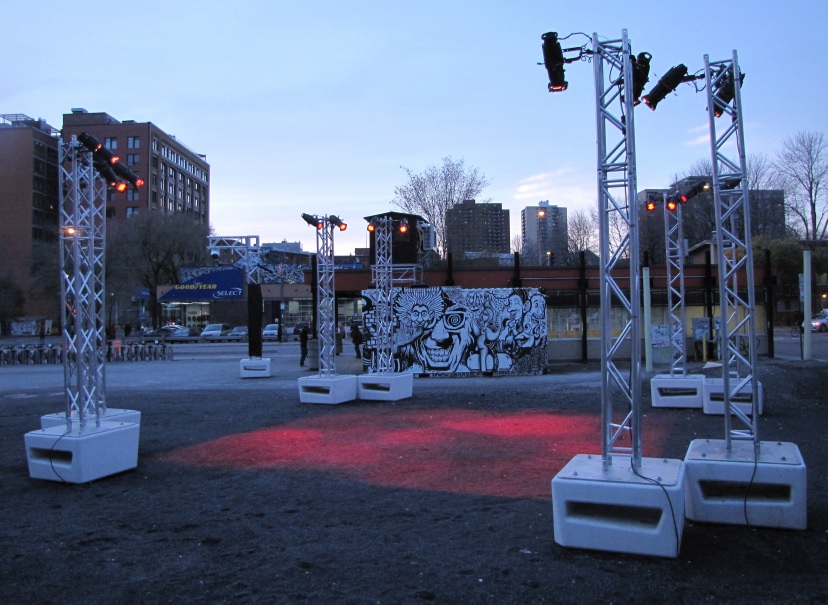 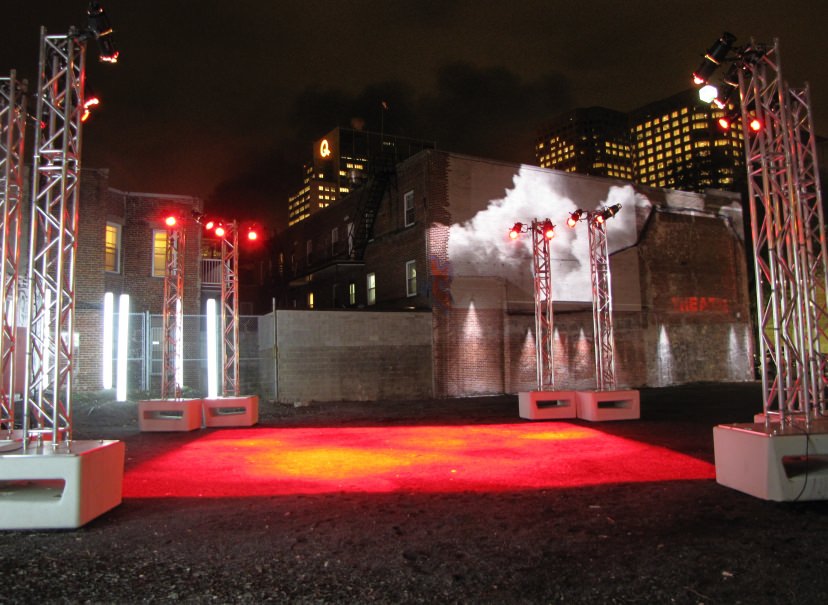 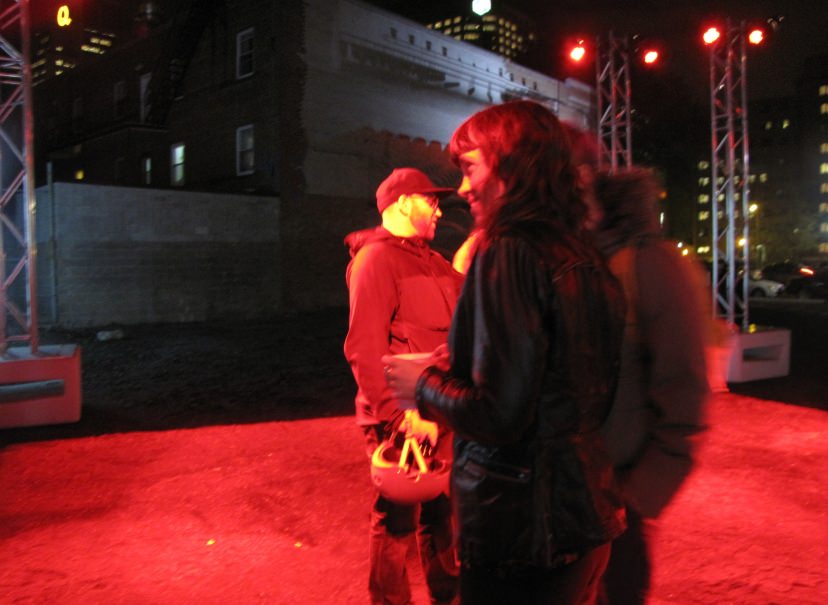 Red Light Monument: Floor Area of Café Cléopâtre Stages (500 square feet) is a site-specific project that pays homage to lower Sainte-Catherine street and how it has been affected by the development of the Quartier des Spectacles. Located next to Saint-Laurent metro, an area of red light measuring 500 square feet is projected on the ground by outdoor event lighting installed above. The dimension of the lit space is the combined surface area of the upstairs and downstairs stages of Café Cléopâtre, a 30-year old cabaret and strip club located on Sainte-Catherine Street, and one of the last remaining sex clubs in Montreal’s historic red-light district.

Using the language and materiality of the large-scale cultural events that now take place in Quartier des Spectacles, this installation will be most visible after sunset, mimicking the visibility/invisibility of sex work in Montreal. The project will be illuminated during the hours of Café Cléopâtre, from 11am - 3am daily.

Red Light Monument: Floor Area of Café Cléopâtre Stages (500 square feet) pays homage to Café Cléopâtre and the manner in which it has resisted gentrification and continues to instigate cultural debate around sex work and labour, while also highlighting the role that contemporary artists play in the gentrification of communities.

A text by Émilie Laliberté of STELLA (www.chezstella.org) will accompany the installation.

Special thanks to: all the workers of Café Cléopâtre and Johnny Zoumboulakis.

Searching the border of Montreal’s former red light district for a 500-foot monument to its history, I failed in my first attempt to locate it, unaware of the particular trick to its viewing: neither interrupting the urban skyline nor demarcated by pedestal or plaque, the monument, here, seeped into the ground—barely visible in the light of day. Instead, through the first brisk week of November 2012, a translucent red square, projected onto the pavement in front of the unremarkable surface outside of Saint Laurent metro, radiated, like embers, for all those who walk the streets at night.

Mimicking the stadium lights that now aggressively beat down on pedestrians as they walk through what has been dubbed the “Luminous Pathway,” an entry point into the area of the city now known as the Quartier des Spectacles, Sheena Hoszko’s Red Light Monument: Floor Area of Café Cléopatra Stages (500 square feet) shone an expository light on the absences and encroachments instigated by urban development. Almost ten years in the making, Montreal’s new entertainment district traces the historic footsteps of places like Paris’s Pigalle and New York City’s Times Square, where subcultural communities have been displaced and dispersed by similar redevelopment projects. Reflecting on the social devastation of former New York City Mayor Rudolph Giuliani’s revitalization project in the mid-1990s, Katherine Liepe-Levinson has described an attempt at “eliminating any explicit signs of sexual desire (along with any signs of ‘social trouble’ in all senses of the phrase) from the official map of his city.”[2] A consequence of these types of development projects is the increasingly limited opportunity for social contact between and across classes and the social chasm that builds and expands to make way for the historical traces of those bodies left without a place to call home.

In The Eighteenth Brumaire of Louis Bonaparte, Marx defined the lumpen proletariat as the “vagabonds, discharged soldiers, discharged jailbirds, escaped galley-slaves, swindlers, imposters, lazzaroni, pickpockets, bamboozlers, gamblers, maquereaux, brothel keepers, porters, literary hacks, organ-grinders, rag-pickers, knife-grinders, tinkers, beggars—in short the whole amorphous disintegrated mass of flotsam and jetsam the French call la bohème.” The lumpen, that “amorphous disintegrated mass of flotsam and jetsam,” has also been evoked via explorations, in the 1960s, of formlessness and anti-form as a challenge to the industrial materiality of Minimalism, while, in the 1990s, Rosalind Krauss and Yve-Alain Bois adopted Georges Bataille’s concept of the informe to categorize works emphasizing base materialism, horizontality, pulse, and entropy and disrupting the opposition between high and low culture in resistance to bourgeois norms. Just as Krauss has argued that the lumpy Lumpen of Mike Kelley’s Lumpenprole disrupts the work’s own horizontality by suggesting a “lower-than-low,” Hoszko’s pavement-as-canvas, one instance of a growing body of works that emphasize a bringing “things down in the world,” might similarly be viewed as operating on multiple planes: with light emanating from above, beating against and accentuating the ground’s gritty texture, the red square pulsated in the space between high and low, its formlessness permitting it to infiltrate the increasingly regulated space of the city.[3]

Situated a block away from the actual Café Cléopatra, a strip club that has occupied prime real estate at the corner of Boulevard St-Laurent and Rue St-Catherine for over thirty years, resisting expropriation attempts by the Quartier’s developers, Red Light Monument manipulated the built environment, plying form from the floorboards to produce an ephemeral monument that emulated the Quartier’s new visual codes to excavate the layers of history flattened by urban development’s wrecking ball. Following only a few months after Montreal’s “Printemps érable,” the radical student uprising that saw the city swathed in the red felt square, ubiquitously plastered across the city, worn on clothing and on backpacks, adorning public monuments and sculptures, and graffitied onto walls, bus shelter advertisements, and Canadian currency, Hoszko’s fluorescent red square might also be read more broadly as a call to resistance and political action and an aesthetic reclamation of the space of the city—a zone for thinking about bodies in movement and motion, bodies in transaction and infraction, bodies both visible and forgotten.

Erin Silver completed a PhD in Art History and Gender & Women’s Studies at McGill University in 2013. Her dissertation provided a queer feminist historiographical analysis of histories of North American feminist and queer art production, as framed by feminist and queer alternative art institutions and spaces from 1970 to 2012.