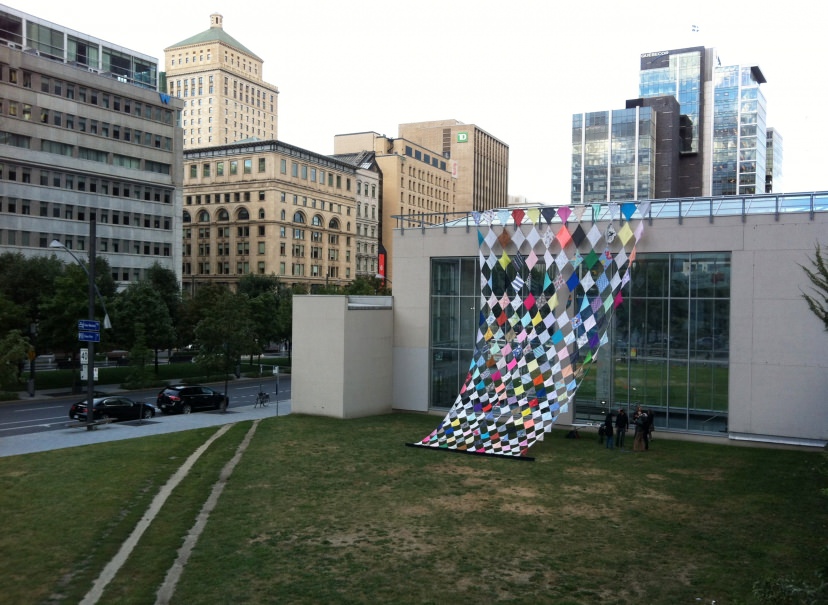 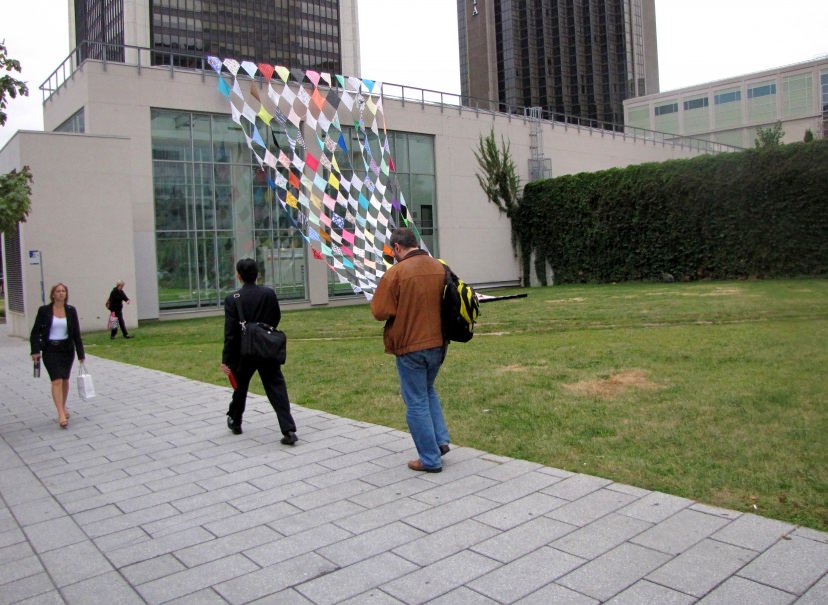 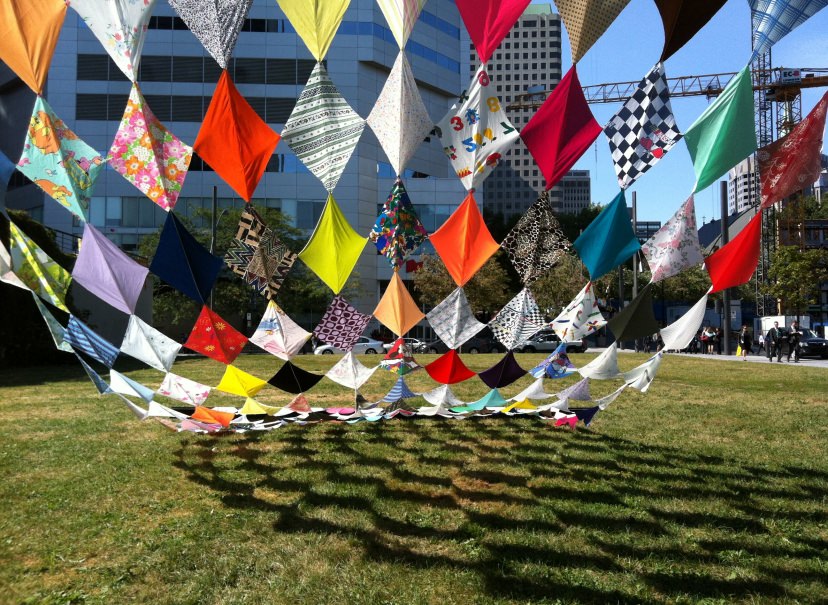 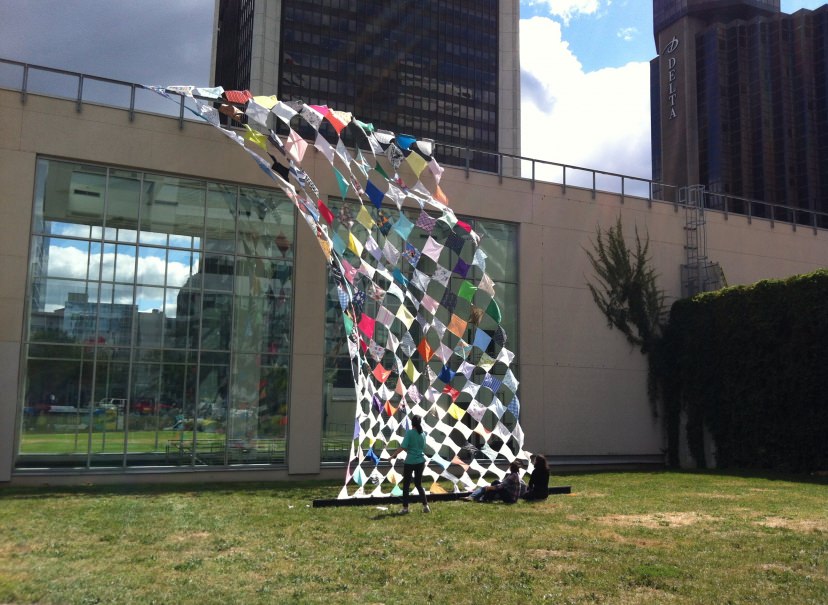 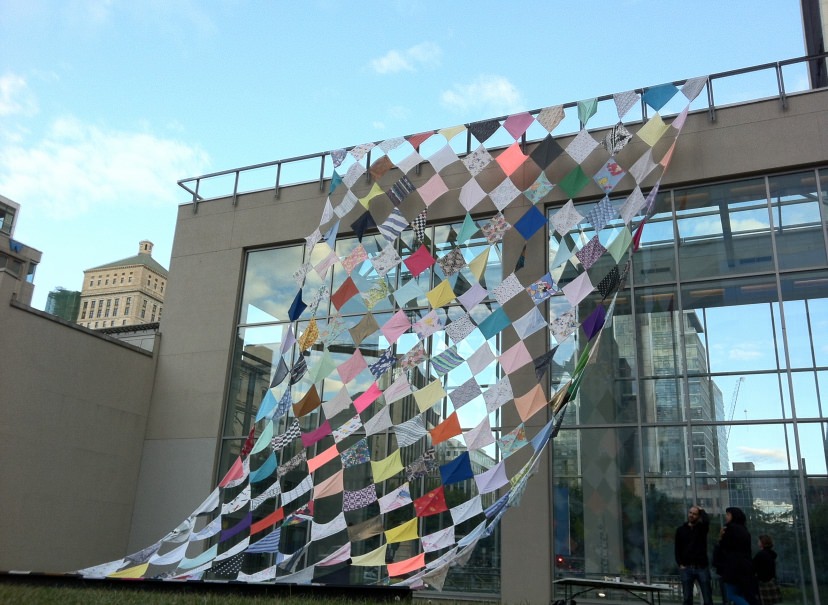 DARE-DARE presents from September 10th to 17th the ephemeral installation Ciel percé by Stéphanie Chabot. This majestic aerial banner, composed of countless pieces of assembled fabrics, will liven up a public space in the Quartier international de Montréal for a few days.

Located near Victoria Square, Ciel percé is a inclined fabric piece almost 40 feet high. The trapezoidal strip stretches along a course nearly sixty feet long, stretched between the cornice of a building in the International Quarter and an adjacent grassy esplanade, creating a narrow, inviting area under the colorful oblique of this soft cover.

The contrast between the craftsmanship of this production -that is both festive and colorful - and the austerity of the glazed atrium of ICAO headquarters on which it clings will surely surprise. Indeed, the aesthetic of Ciel percé is more like a makeshift shelter designed for fun, or a harlequin surface for a fairground camp than a public work in a large urban center.

The excessiveness of this assemblage creates odds and ends and the playful and spectacular aspect of Ciel percé reminds us of the need to dream and make the world fantastic. The repetition of the same unit - the bed sheet - recalls the scale of the body and the domestic space. Surprisingly humanizing, these squares are loaded with a personal and intimate aura in this place with an official and severe character. By the diversity of its components, the canvas mix good and bad taste, forcing together leopard patterns, smiling Mickey Mouse and floral prints. The result is a kind of portrait of society evoking diversity without concealing the sometimes dissonant contrasts that compose it. The apparent fragility and delicacy of the sewn pieces are also extremely flexible and impressive. The artist highlights, through the games of breakthroughs and transparency of the canvas, the context in which it infiltrates. The quilt blends with its surroundings and vibrates with its colorful patterns the industrial materials that make up the city, just like the changing blue of the sky.

The artist would like to thank Pierre Terzian, Mélissa Robertson, Nadine Duclos, Genevieve Massé and the entire Dare Dare team.

Stéphanie Chabot lives and works in Montreal. Since obtaining a BA from Concordia University in painting and drawing, her practice has expanded to include multimedia installation, sculpture and video. The artist also holds a master's degree from York University in Toronto. Her practice is based on an imagery in which the clichés of popular culture intertwine with a personal mythology. Her work has been exhibited in several artist centers and galleries in Canada, as well as in England, Australia and Spain. Stéphanie Chabot has been very involved in La Centrale artist-run center for various reasons. She is recently the General Coordinator of the Skol Arts Center.

You don't need to pray to God any more when there are storms in the sky, but you do have to be insured.

Conceived as a temporary public artwork in Downtown Montreal, Stéphanie Chabot's installation Ciel percé is composed of used fabrics in diamond-like shapes.  Attached to each other by their corners, the fabrics create a checkered-like pattern, resembling an unfinished patchwork. The various patterns on the years-worn and washed-out printed fabrics show disparate cartoon characters or domestic flower contours, materials that once inhabited our childhood and now compose the hidden corners of our home today.

Located in the vicinity of the Victoria Square, Ciel percé functions like waving mnemonic fragments from the past or like a used floating working class quilt. The area where the artwork was installed is called the International Quarter, known for its 'prestige address' as the global face of the city. The carefully chosen site is a public park situated directly between the Montreal World Trade Centre and the Montreal Exchange, where financial derivatives are traded. In the 1980s Canada put in motion its neoliberal turn – a shift most easily recognized when Paul Gobeil, a Liberal member of the National Assembly famously said in 1986: « Il faut runner l'État comme une business » (translation: "The state has to be run like a business"). These developments followed a long period, between 1982 and 1995, of exhaustion from the social model established in the traces of the Quiet Revolution. [1] This very same site became the ground for Occupy Montreal where over one thousand Montrealers participated in the occupation movement. Hoping to attract the government’s attention to serve the interests of the other 99%, tents were raised in the square from mid-October before being evicted on November 25, 2012.

Chabot's installation Ciel percé came a year after this pacific occupation that abode the economical centre of Montreal. The work hung, on one end, from the edge of the International Civil Aviation Organization (ICAO) – a specialized agency of the United Nations to promote the safe and orderly development of international civil aviation throughout the world – and, on the other end, affixed to the ground forming a structure that recalls a one-sided survival shelter. Contrasting with the surrounding environment of skyscrapers, this malleable installation comprised of bedsheet scraps stitched together floated in the air. While a year earlier tents offered temporary refuge to the protestors, Chabot's tent-like installation offers to mediate between human subjectivities connected through bedclothes, the most intimate sector of the private sphere. Whether the viewer stands inside or outside the soft structure, she is positioned between a "soft" and a "hard" place – between that which signifies women's labour and the domestic, and that which signifies men's work and the public, i.e. Victoria Square or the centre stage for the flux of capital. The textiles articulate the nuances and inflections of social meaning in its physical proximity to the larger institution of the International Quarter. Thus, Ciel percé reminds us of today's contested relationship between citizenship and labour. The artwork revives the citizen, rather than the consumer, in us by its dissonant flashy patterns, bright but washed out colors, and seemingly unreasonable scale.

Marking the same site that was seized by Occupy Montreal, Chabot explores complex layers of social meaning and addresses the political as it relates to labour, culture, identity, protest and display. The work is both a literal and a symbolic gesture – an insertion into what might seem to be an otherwise impervious and unbreakable system. While Montreal’s looming downtown horizon of erect skyscrapers portends an all-encompassing capitalism where consumption and capital would be our saviour, Ciel percé signals that the sky is now perforated, that our vision for a new skyline needs to be re-defined with a place for the people and its social fabric.

Born and raised in Montreal (CA), French-Canadian of Vietnamese origin, Jacqueline Hoang Nguyen is a research-based artist currently based in Brooklyn (NY) and Stockholm (SE). Nguyen recently completed the Whitney Museum of American Art’s Independent Study Program (Studio 2010-2011). She obtained her MFA and a post-graduate diploma in Critical Studies at the Malmö Art Academy in Malmö, Sweden (2003-2005), and had previously completed her BFA degree with distinction at Concordia University in Montreal, Canada (1999-2003).