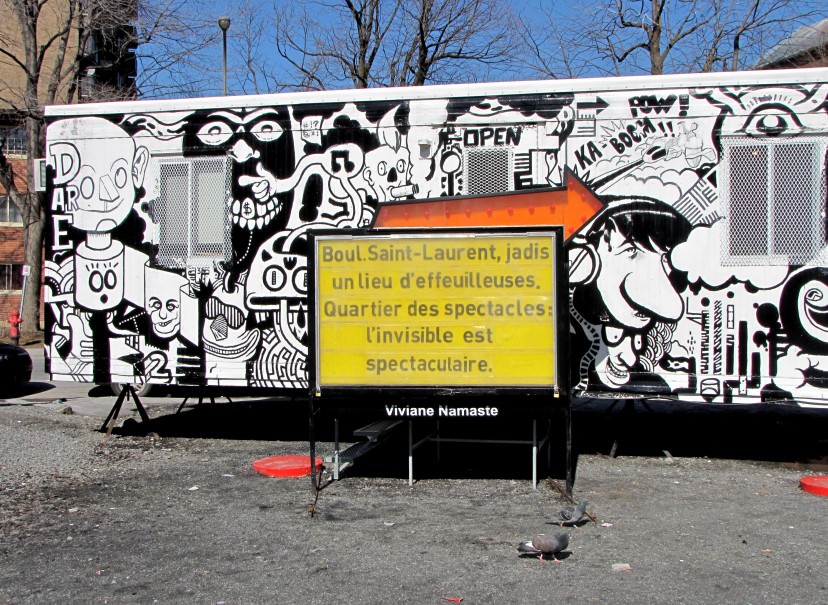 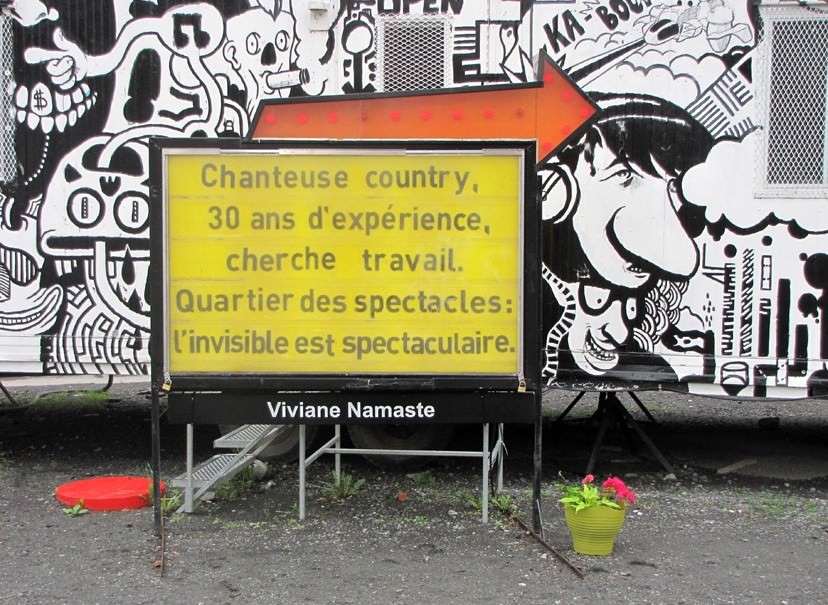 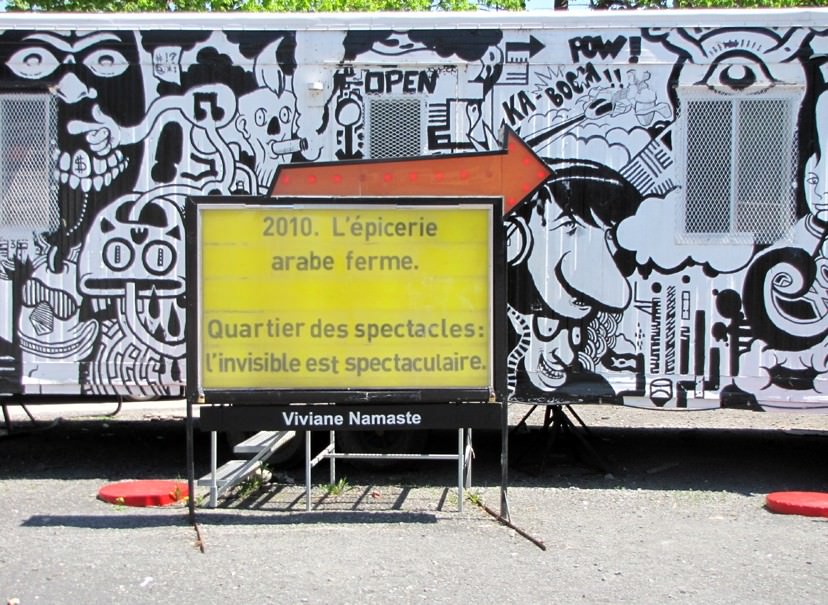 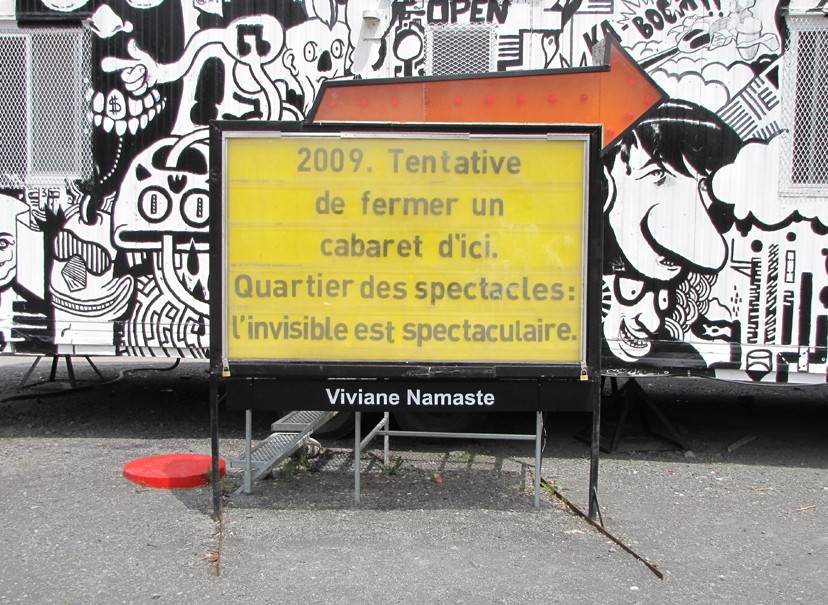 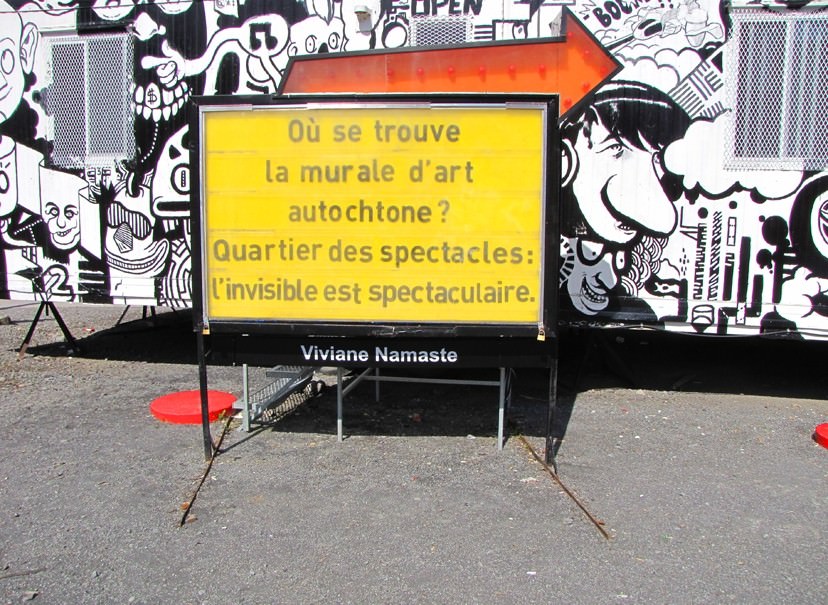 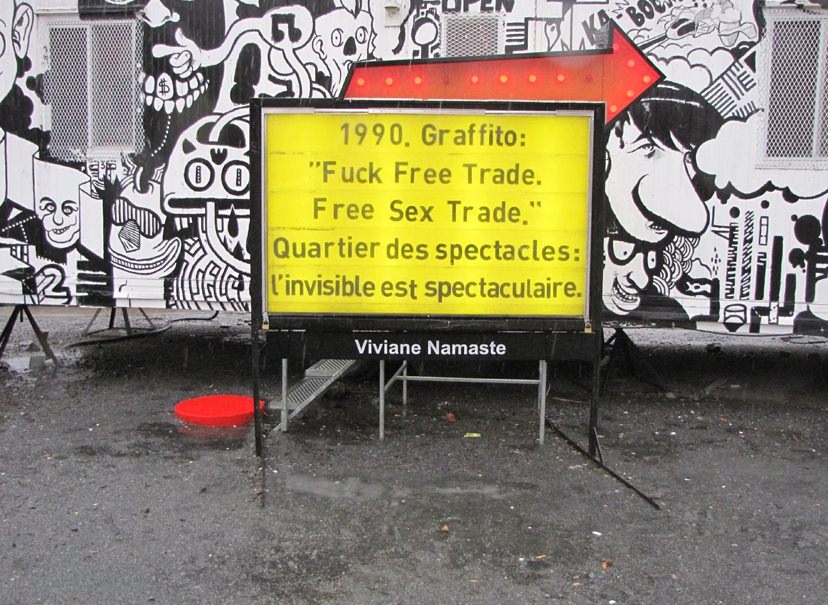 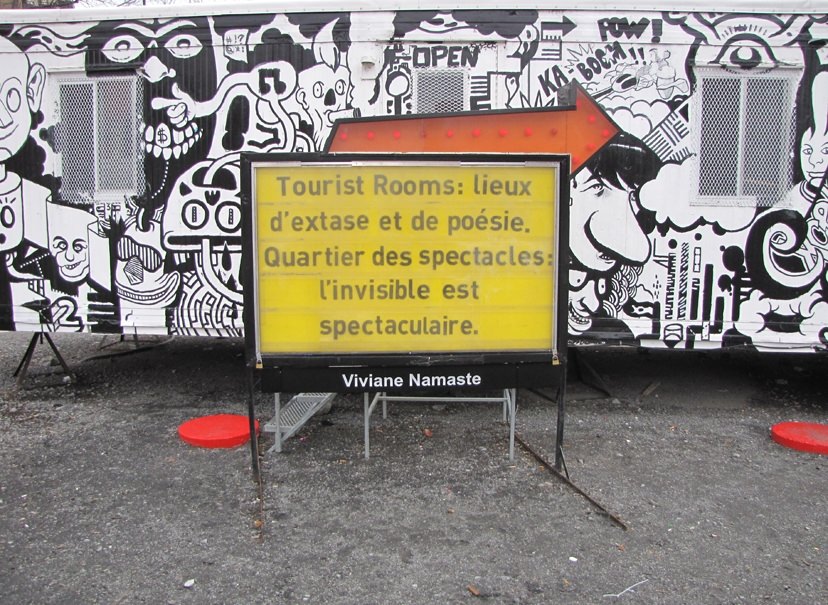 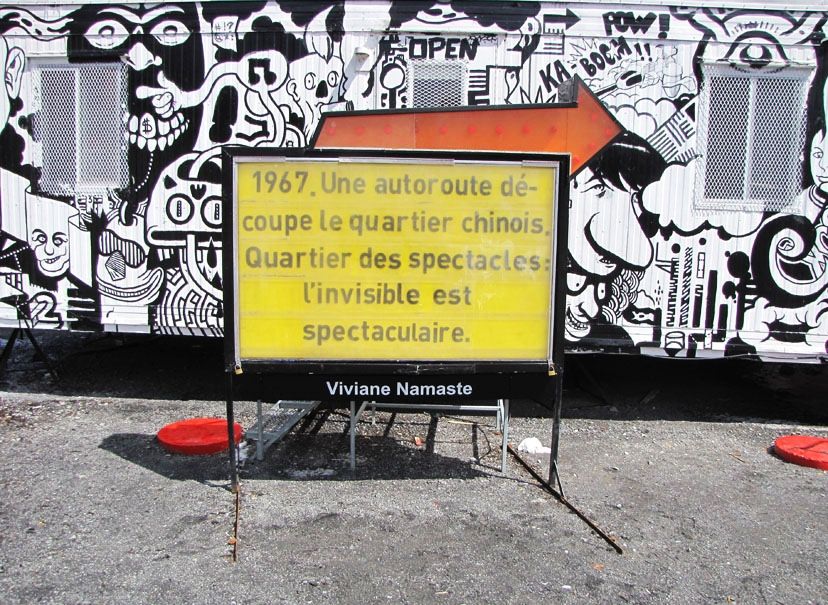 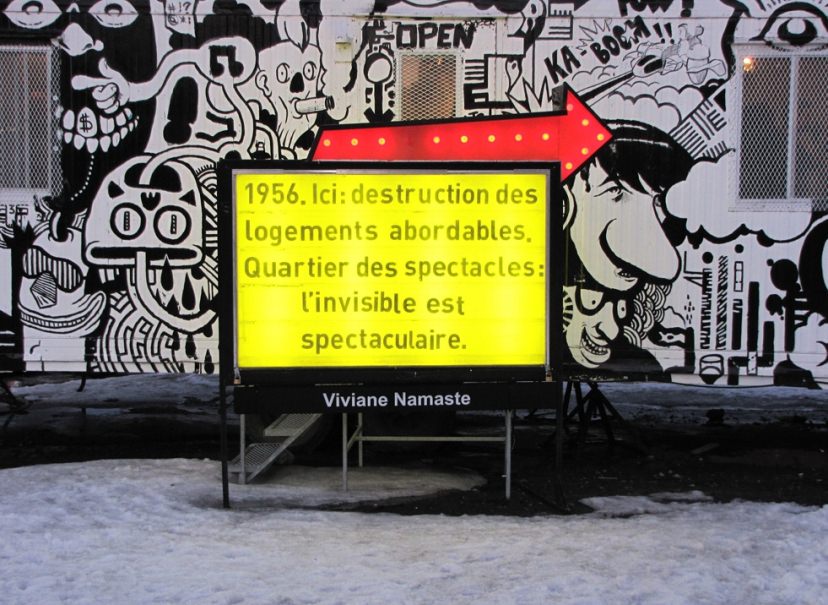 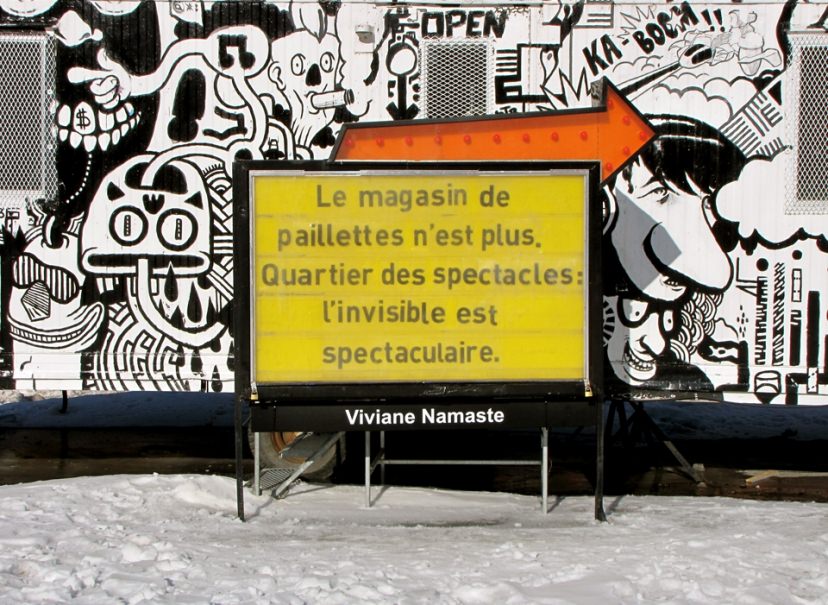 Ten slogans invite readers to understand better the neighbourhood in which the road sign is situated: its history, its artists, its ethnocultural communities, its workers, its forgotten traces. The statements seek to make visible forgotten elements of everyday life in Quartier des spectacles: the popular singer, Aboriginal art, the demolition of social housing, the closure of a middle eastern grocery store…

The current image of the neighbourhood evokes spectacle and show-business, urban development and architecture: practices which are deeply visual. Here, it is through the visible that meaning is made. The ten statements presented as part of this work change the conversation, asking us to think about what is invisible in this neighbourhood.

As Montréal enacts its marketing through the Quartier des spectacles, a promotional slogan is proposed to undo the perverse effects of the transformation of this site: "Quartier des spectacles : What’s invisible is spectacular". Repeated each week, this slogan is written with each of the ten statements, suggesting that the definition of a site cannot limit itself to the visible, but must base itself on the invisible as well.  Better still: the enunciation of a site is founded on the repression of certain histories and certain statements. Within such a violence, the referents of signs are displaced, abandoned, erased: "Quartier des spectacles" designates a large festival, an open air concert, urban design which allows for thousands of people to move through public space, but "Quartier des spectacles" no longer refers to a country singer from the Main, the store where artists bought materials to make their costumes, or the Tourist Rooms where the artists and workers of the neighbourhood slept and made love. As such, the repetition of the slogan "Quartier des spectacles: What’s invisible is spectacular" demands that we reflect on what we do not see in the neighbourhood – the displacement of poor people, the expulsion of sex workers, unemployment among popular artists of the area. Writing here invites us to see, and re-view, otherwise. The neighbourhood is spectacular not only for its visual shows, but especially for what we do not see.  The writing of a promotional slogan underlines these invisibilities and erasures.

The economy of writing proposed here – a perversion of an official discourse by historical statements and a marketing slogan – deals with economy itself: the unemployment of artists, a graffito on free trade in the early 1990s, the exchange of money for pleasure that has driven this neighbourhood for so long, the development of a neighbourhood and the closure of local businesses, the social costs associated with urban development. The form of the message – a lit road sign, associated with publicity and promotion – reinforces the specifically economic aspect of this writing.

At a time when the Quartier des spectacles is transforming at incredible speed, which statements of its culture are authorized? Which economies function? Which histories are written? And especially, how can writing itself interrogate the conditions of enunciation of a site?

Professor at the Simone de Beauvoir Institute at Concordia University, Viviane Namaste's research includes attention to the history of artists on the Main. In 2009, she wrote a brief on the artistic heritage of Saint-Laurent Boulevard, in the context of a public consultation on the development of the district. Aside from working on a Lite-Brite box in the 1970s, she has never written  in a light box sign. But she is ready for the challenge!