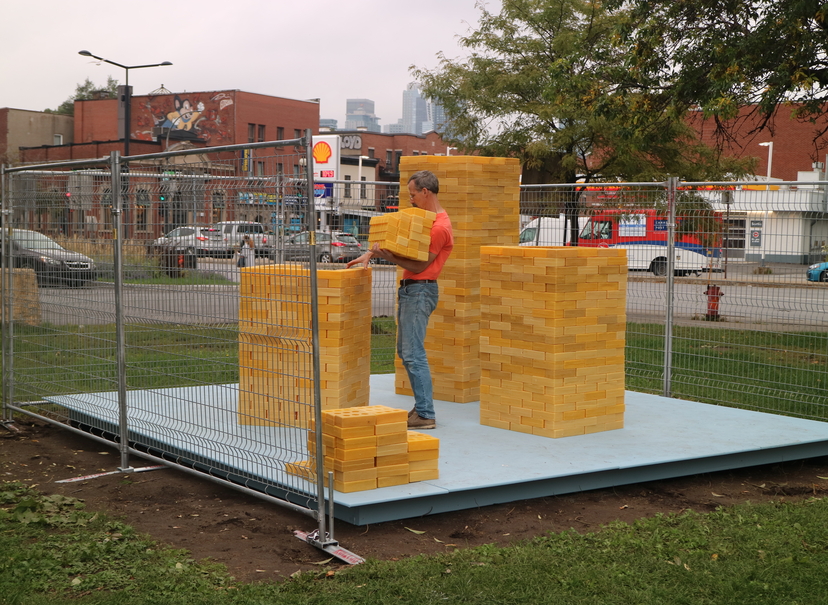 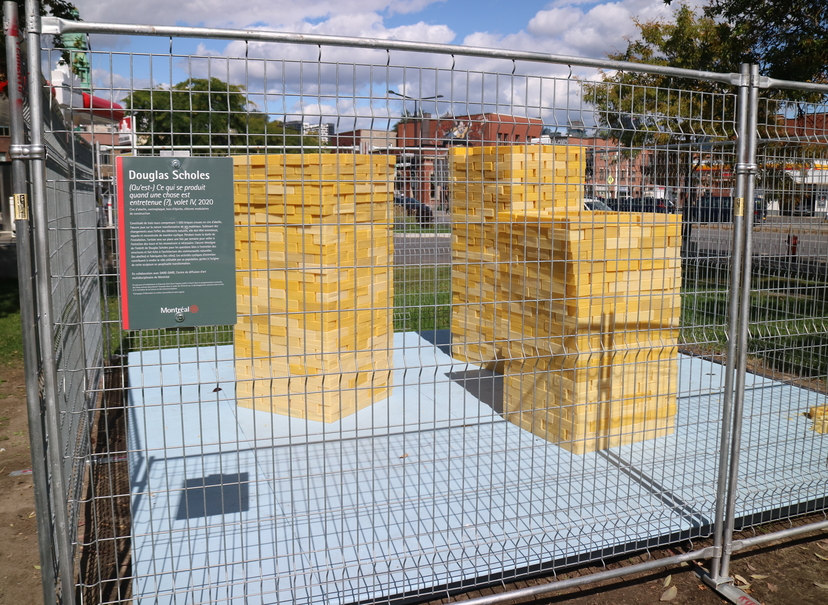 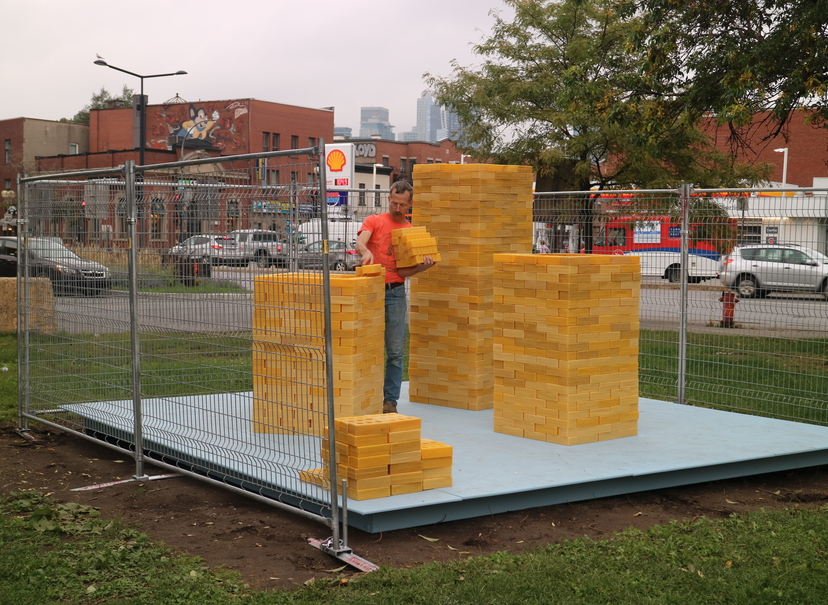 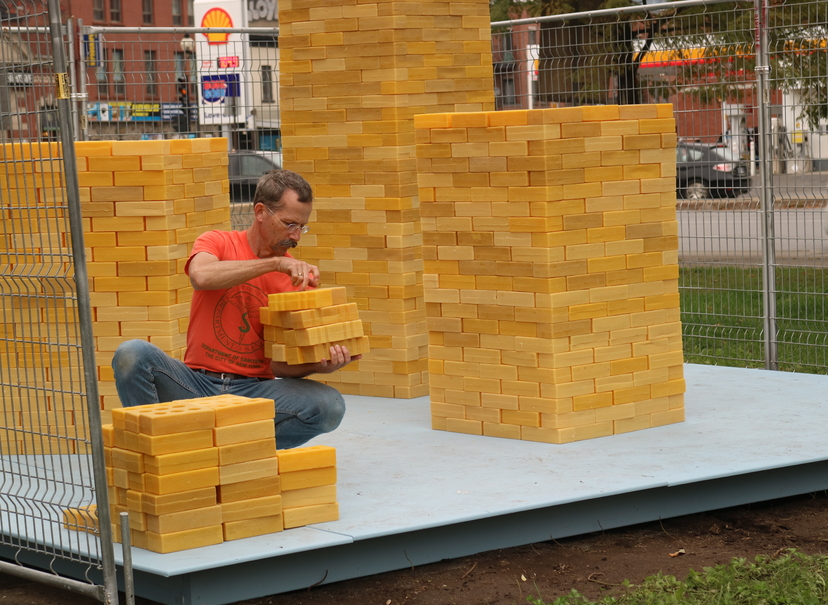 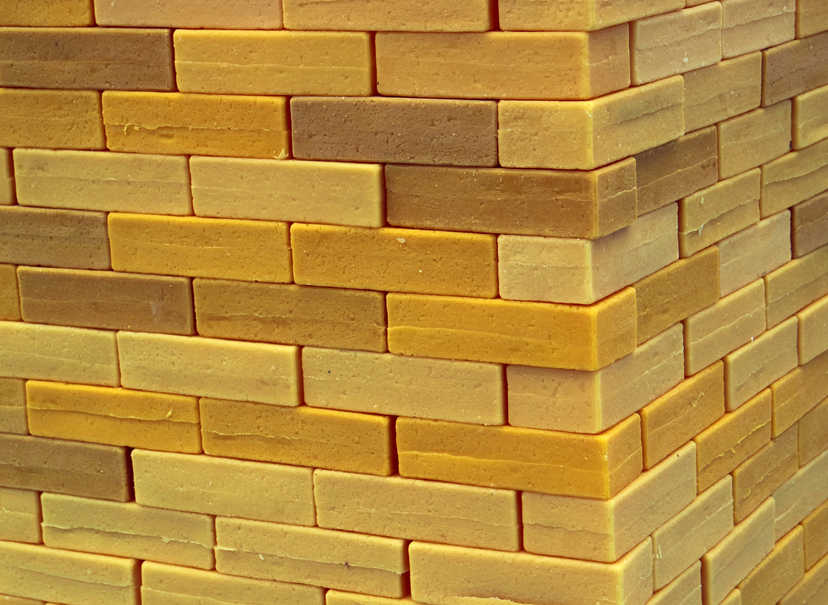 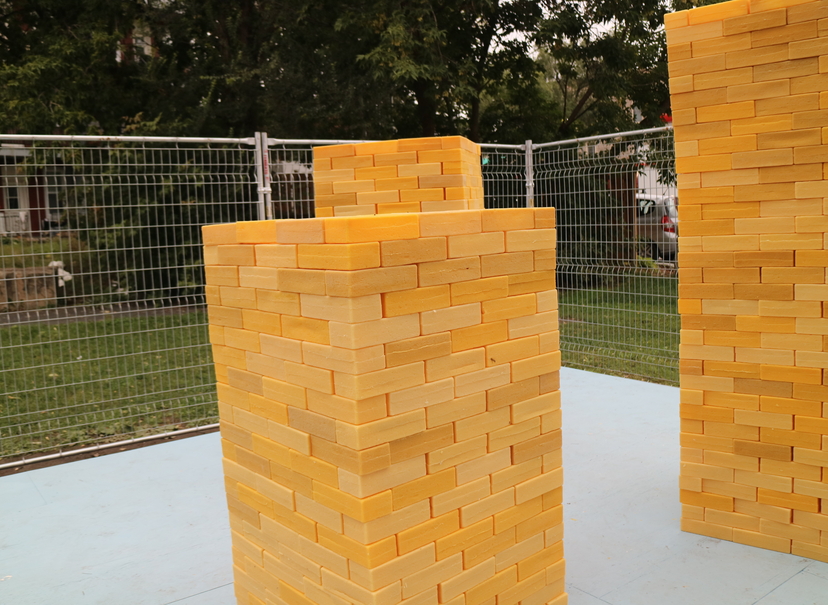 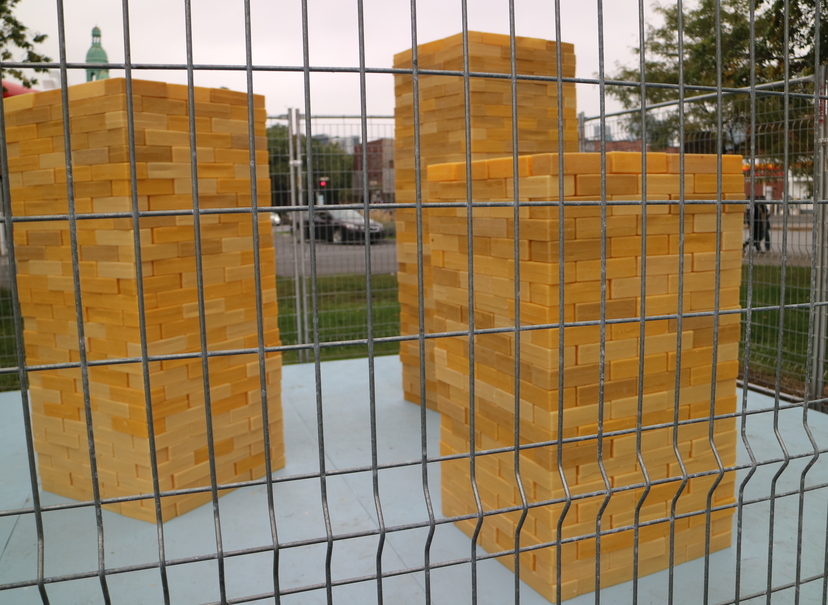 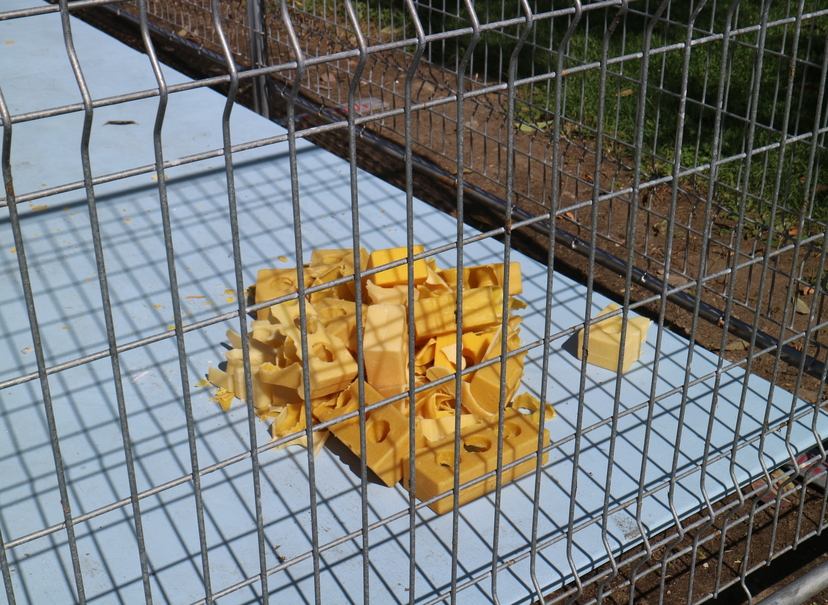 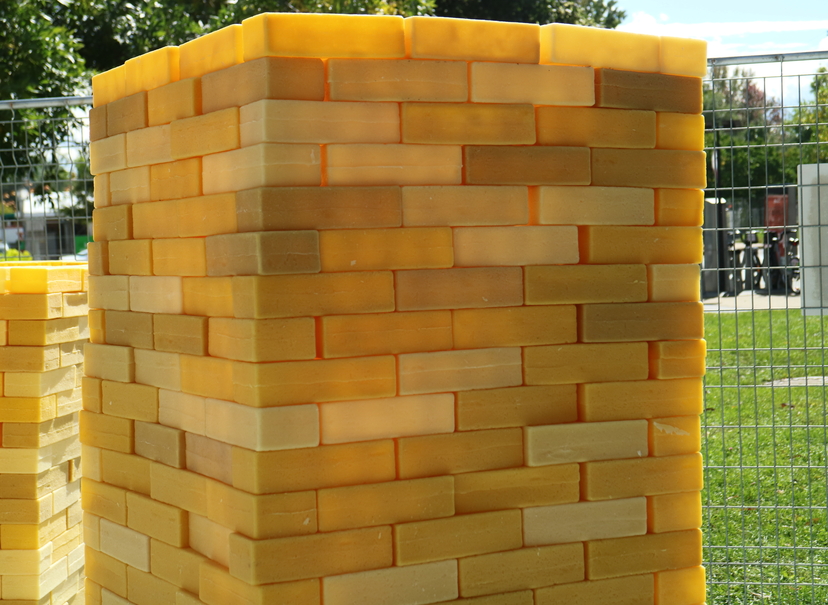 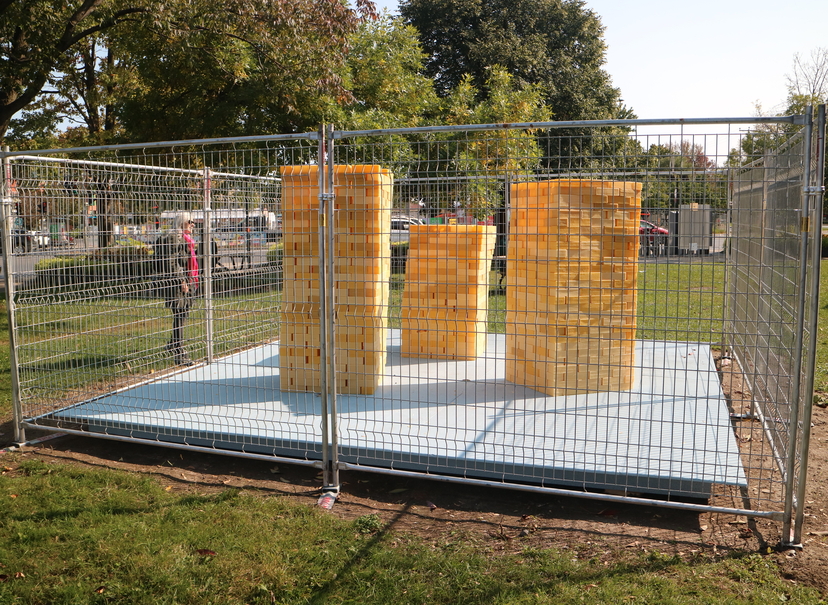 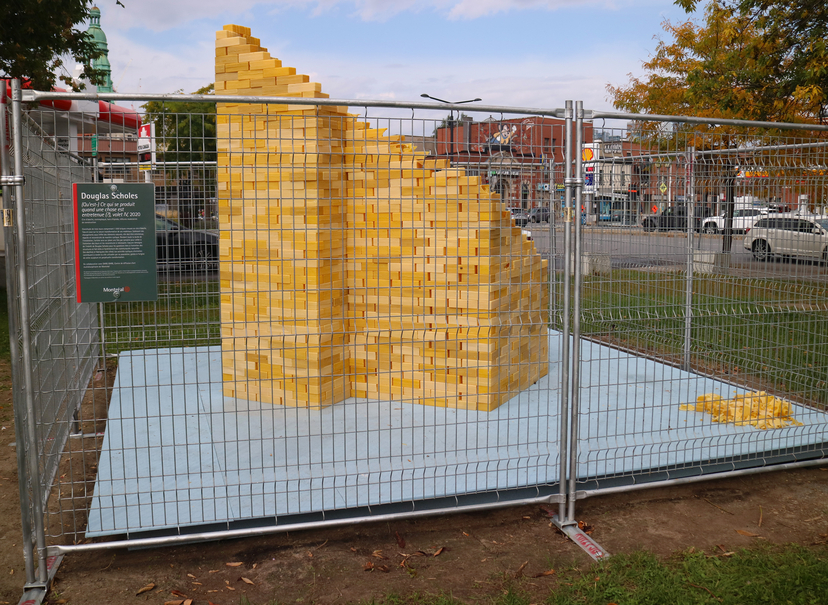 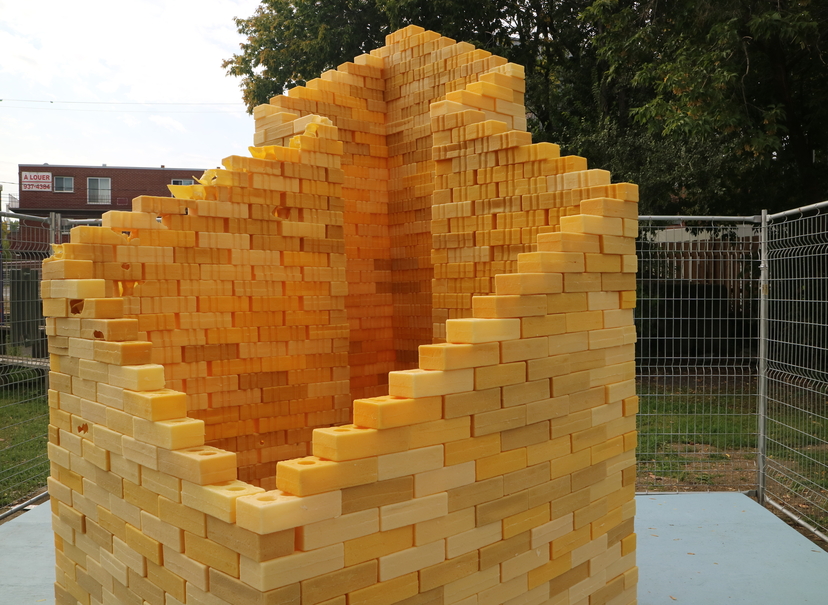 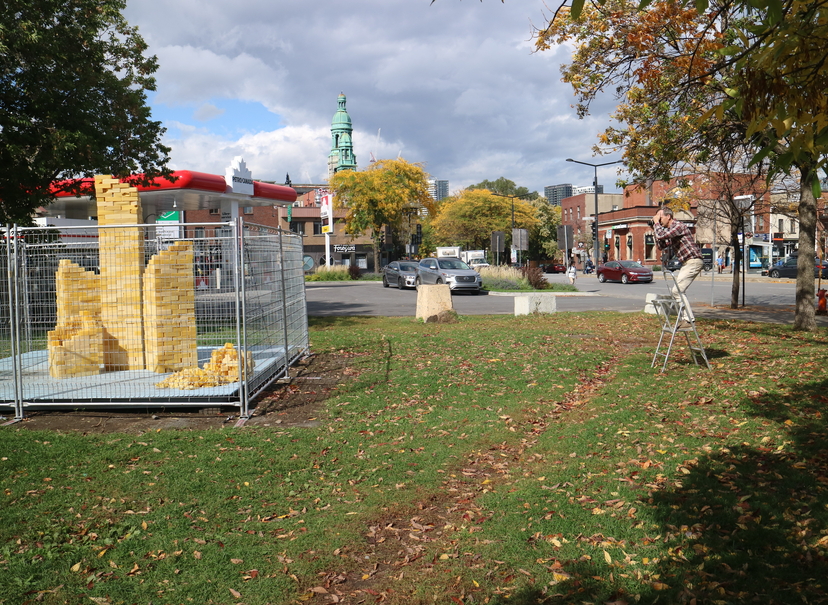 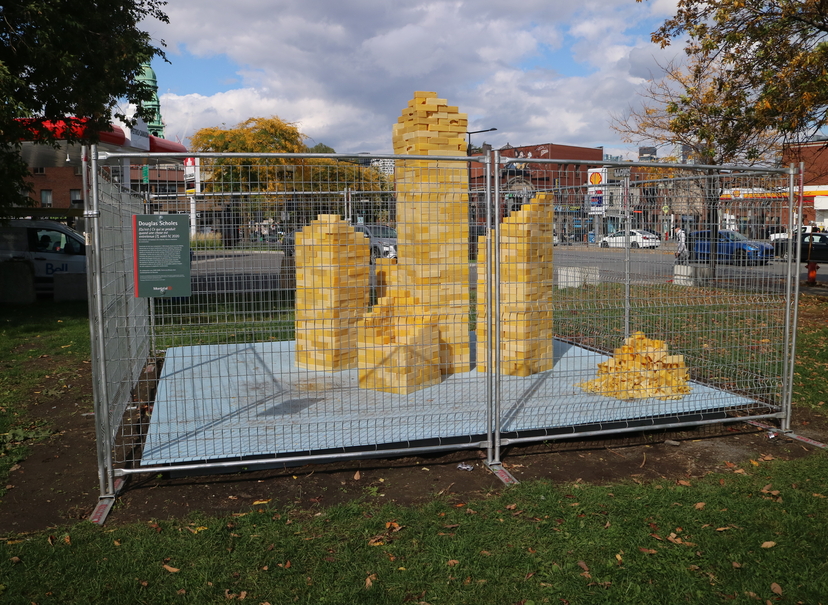 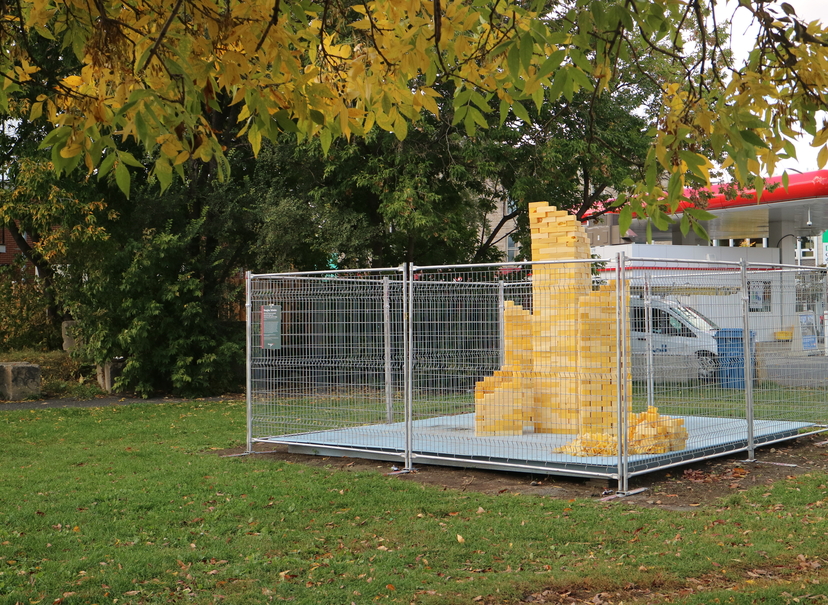 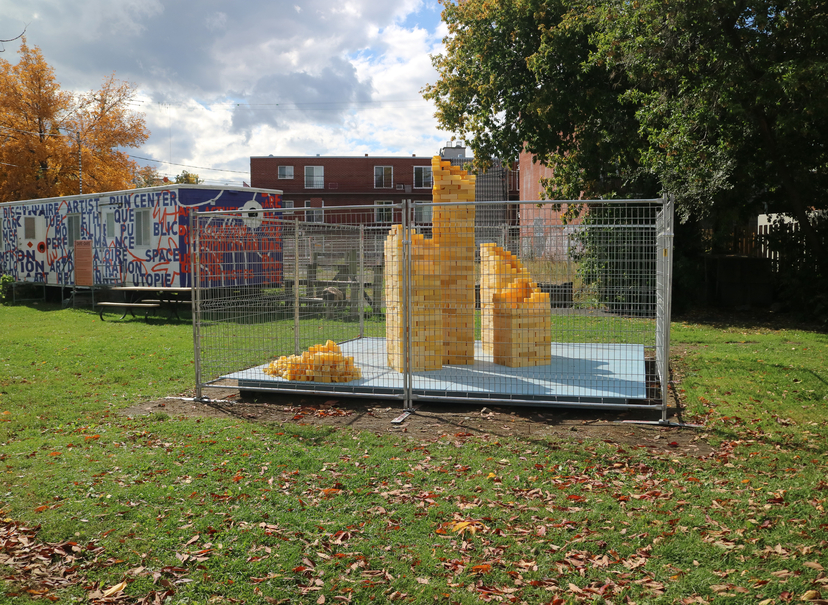 (This is) What happens when a thing is maintained (?), part IV

(This is) What happens when a thing is maintained (?), part IV, is an alternative to the conventional idea of public art as stayed, static, non-changing.  Instead, the focus is on temporality, ephemerality and change as aesthetic qualities that also define sculpture.  With its three towers of hollow cast beeswax bricks, the piece is susceptible to deterioration which allows for the performance of some maintenance. The bricks that form the towers are casts of clay bricks, a ubiquitous component for building structures in which society lives and works. Beeswax provides a reference to the foundational material that support the work and social hierarchies of the honeybee community. With the malleability to take on desired shapes, the hollow beeswax brick forms provide limited strength for the towers. Exposure to the elements (natural and human), reveal in a short period of time the cyclical nature of building, deterioration and maintenance, and the attention required to restore and revalue the original.

I am an object maker with interests in the formal compositions of sculptural work and their use of industrial construction practices and common everyday materials. I am interested in the acts and actions that reflect societal infrastructures and the influence of maintenance (in its various manifestations) on them.  These interests have fuelled experimentation with the pragmatic aesthetic and the results of maintenance as formal artistic concepts.

The pragmatic aesthetic is the intrinsic yet evolving appearance of common everyday things, spaces and structures found in our environments, the appearance of things for which a dynamic existence is due to use and the passage of time. The pragmatic aesthetic highlights the tension between the actual and potential state of an object or space - how and why it is cared for or not.

I consider maintenance to be an archaeological process that occurs within the present and the ordinary, revealing the history of things, activities and place. Through the acts of maintenance, the abandoned or forgotten are re-discovered and made visible enabling a re-valuing of things. By exposing the layers of sedimentary activity found in landscapes, by acknowledging the inevitability of change and by highlighting the visible but unseen elements that permeate everyday life, the work opens a space for conversations about the condition of things.

(This is) What happens when a thing is maintained (?), part I, initiated in 2004 and installed in Viger Square (Montreal), was the inaugural exhibition within the experimental framework of Dis/location, a project in which DARE-DARE moved from the white cube to a mobile office entrenched in the urban environment, a project that continues beyond these days in 2020. The current manifestation is thanks to the City of Montreal and the Œuvres artistique-VAS, a project that provides for previously exhibited sculptural works to be installed throughout the city along the routes designated as safe passage for pedestrian traffic during the time of the pandemic of 2020. DARE-DARE has graciously provided administrative support and the site near Atwater Market, a Dis/location for the mobile office since 2015, a fitting collaboration for the re-presentation of this work.

Exhibition/programming financed under the Agreement on the Cultural Development of Montreal concluded between the City of Montreal and the Government of Quebec.

Douglas Scholes’s practice is an archaeology of the present and the ordinary as seen through the notion of maintenance and the gestures of cleaning, restoration, and repair. Engaged and playful, linking sculpture, photography, and performance, Scholes reveals certain details of the environment that are visible but not obvious to highlight the little attention they are paid. Scholes’ work has been exhibited in many Canadian institutions including DARE-DARE - Centre de diffusion d’art multidisciplinaire de Montréal, the MacLaren Art Center, Southern Alberta Art Gallery and the Art Gallery of Nova Scotia. In 2012, he created the large-scale project The Condition of Things around the site of the London Olympic Games as part of a Canada Council for the Arts residency at SPACE Studios in London, U.K. He has also been in residence at the Banff Centre (Banff, Canada), La Maison Laurentine (Aubepierre-sur-Aube, France), Rad’Art (San Romano, Italy), Imagination Station (Detroit, United States), and 3e impérial (Granby, Canada). He lives and works in Montreal.